Zach Wilson has been put on notice 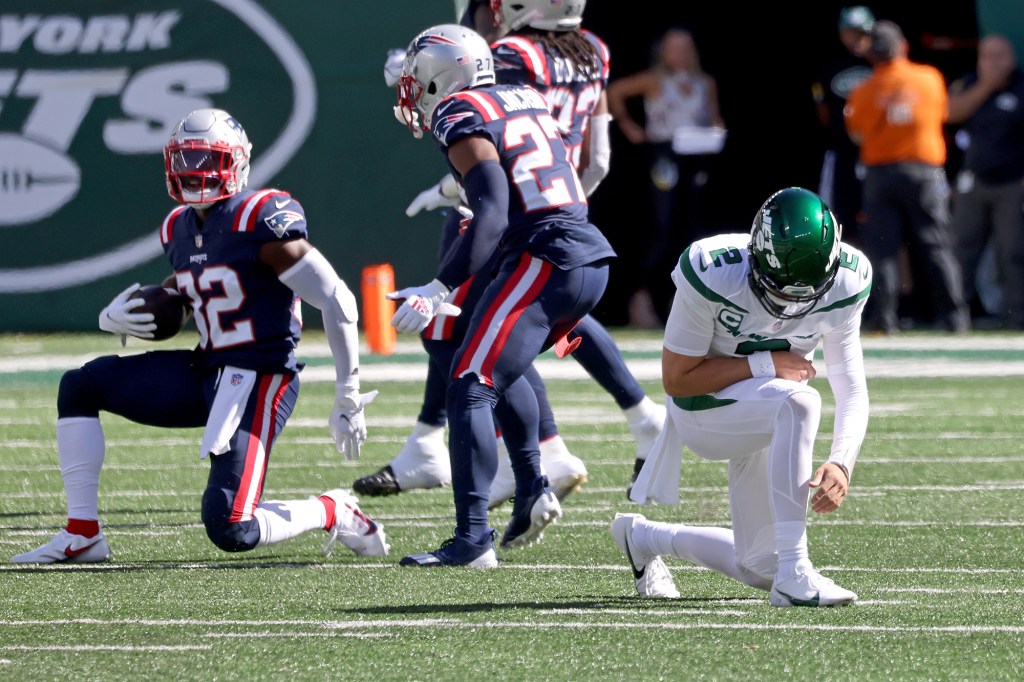 There were 14 minutes, 12 seconds left and the boo birds couldn’t contain themselves any longer.

Zach Wilson had already thrown four interceptions to Bill Belichick’s boys when he lobbed one too high and incomplete in the right flat for Michael Carter.

And the sound that they all have heard — all of them who have followed Joe Namath at one point or another have heard — Zach Wilson heard.

“I’m not paying attention to it,” Wilson said after Patriots 25, Jets 6, “but they should be booing, right?”

Anatomy of a murder, football style.

You make terrible decisions and terrible throws against a Belichick defense, you don’t live to tell about it.

It doesn’t mean that the honeymoon is over for him.

It simply means that he has been placed on notice, that when you are the second-overall pick of the NFL draft, even if it is only your second NFL game, you don’t get cut any slack when you give the other team 16 points and you can’t get your team in the end zone.

It is never a fair fight against Belichick for rookie quarterbacks, but this was the home opener, Jets fans waving white towels, a sun-splashed day of hope for a new beginning and bright future.

Zach to the Past instead.

“It’s on my shoulders,” Wilson said. “I gotta do better.”

Wilson could not tame the lionhearted gunslinger in him when the checkdown would have been the better option. Or a throwaway. You try to play hero against Belichick at your own peril. Boring is better sometimes, per Robert Saleh.

“Probably a little bit of trying to do too much. … I would just say lack of execution,” Wilson said.

Remember when Sam Darnold, who sure isn’t seeing any ghosts in Carolina, saw ghosts in prime time against Belichick? Sure you do.

Wilson was asked if he was pressing.

“I wouldn’t say pressing. I felt like there was a lack of rhythm. When your first two passes are interceptions, it’s tough to find that rhythm, you’re not on the field much, all of a sudden the first quarter’s over.”

Wilson was asked if he saw ghosts. “No.”

Well, apparently he was seeing some things he shouldn’t have seen. In one breath he would say: “I felt like I was seeing the field well,” and in another: “They threw some different coverages at us as far as zones as well.”

His fourth interception, which came in the third quarter, was 4 or 5 yards inside Moore, who was by the left sideline.

“We did have a little bit of confusion out there on the side,” Wilson said, “but the ball’s in my hand, I gotta take care of the ball.”

It wasn’t so much that Belichick took Corey Davis (two receptions, 8 yards) away as Wilson took Corey Davis away. Davis took ownership of the second interception, but it was a high throw into man coverage that deflected off his hands after Wilson had rolled right.

“Based on how the [defender] was playing,” Wilson said, “I probably just shouldn’t have thrown it.”

This won’t be San Diego State or Coastal Carolina, no disrespect intended, any longer.

Some growing pains are more painful than others.

“This is what we signed up for, right?” Wilson said. “There’s gonna be games like this. You gotta keep that swag and that mojo every single week.”

The kid didn’t appear rattled when he calmly faced the music afterwards.

“Believe in yourself,” Saleh told his QB afterwards. “Shake this one off.”

The Jets are certain he will. They did enough homework on him to feel confident that he’s made of the right stuff. Just not on this day. Just not against this dream-killer coach.