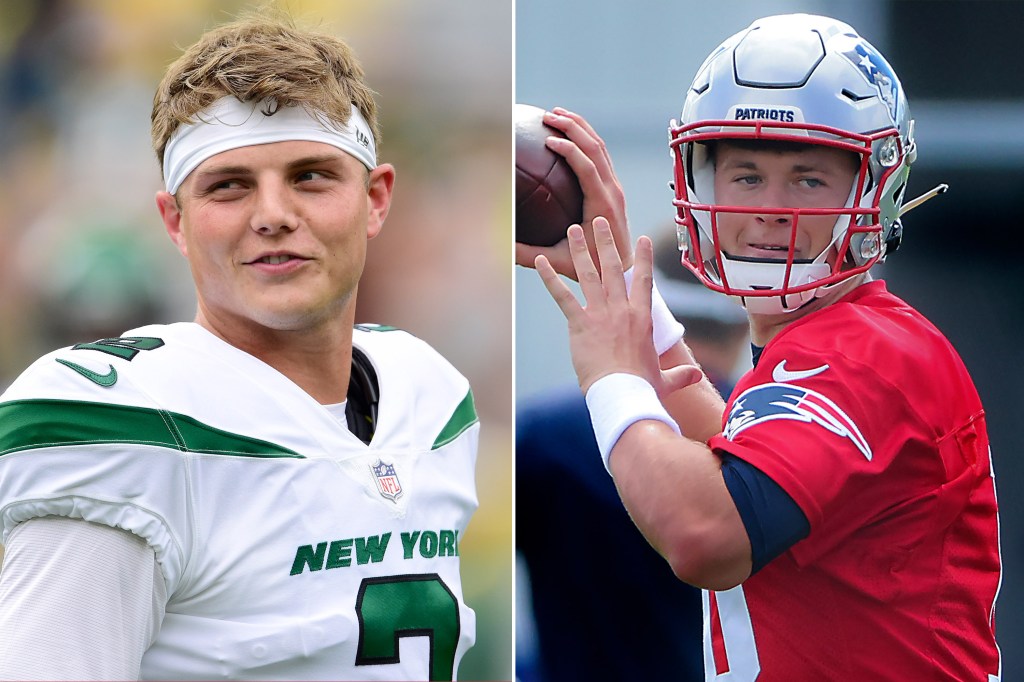 The Jets never trotted out a quarterback who could go toe-to-toe for any length of time with Tom Brady.

Chad Pennington was a worthy foe, but he didn’t have the arm or the health or the supporting cast to give us a full-blown rivalry. Mark Sanchez scored a memorable playoff upset of Brady in Foxborough, but it was fleeting. Sam Darnold saw too many ghosts in front of him one night to even know Brady was the opposing quarterback.

But now … now we get Zach versus Mac, and hopefully — for both their sakes — for the next decade.

In this corner: from BYU … wearing the green and white trunks … weighing 209 pounds … Zach Willlll-son.

And in this corner, from Alabama … wearing the blue, red, silver and white trunks … weighing 217 pounds … Mac Joooooones.”

Bill Belichick’s release of Cam Newton on Tuesday means there is a new Boy Wonder in New England, who was 3 years old when Brady won the first of his six Super Bowls with Belichick.

Ominously for Wilson and rookie Jets coach Robert Saleh, Belichick in effect prepped the battlefield for Jones when he doled out $159.6 million in guarantees over the first nine days of free agency.

The Jets are gaga over their precocious rookie quarterback, who should not be burdened or consumed by any pressure to win during his honeymoon period on a rebuilding team — however long it lasts.

But at the very least — at some point, and probably some point soon once the regular season begins — he will be measured against the other members of the 2021 quarterback class who didn’t get the chance to play for the Jets because GM Joe Douglas craved Wilson with the second-overall pick.

To the New England Bleeping Patriots.

One lousy year out of the playoffs, while Brady ended up hoisting his seventh Lombardi Trophy alongside Bruce Arians and Rob Gronkowski in Tampa, compelled Belichick to go “All gas, no brakes” during his scorched-earth reload.

It has never been a good time for a young Jets quarterback to play chess against Belichick. One big advantage Brady had through the years over Peyton Manning was this: Brady never had to play against a Belichick defense.

The Jets are also gaga over Saleh, but Belichick has won 280 regular-season games and 31 in the playoffs as a head coach. Saleh is 0-0.

It will be incumbent upon Wilson to block out the noise, especially during the two Patriots Weeks prior to the Sept. 19 and Oct. 24 games, given that they will mark his introduction to the New York-Boston rivalry.

The spotlight will shine on him in Week 1, with Sam Darnold greeting him in Carolina, and again on Dec. 26, against Jacksonville’s Trevor Lawrence, the apple of Jets fans’ eyes last season and the first-overall pick of the 2021 draft.

But the scars from the Brady Era remain for the Jets and their fans. Their worst nightmare is the prospect of a second coming of Brady, and the start of a new dynasty that would encourage Belichick to hold off on retirement and coach into his 70s.

Brady was a game manager when he replaced Drew Bledsoe in his second season in 2001. Belichick undoubtedly believes Jones, who was schooled by Nick Saban and threw for 464 yards and five touchdowns in the national championship game against Ohio State, will not find the game or moment too big for him.

There were skeptics who were flabbergasted over reports that 49ers head coach Kyle Shanahan might be interested in drafting Jones because, in their opinion, he lacked the special athleticism to be considered as the third-overall pick. But he has displayed enough accuracy, poise, command, leadership and intangibles for Belichick to trust him enough to hand him the keys to Robert Kraft’s kingdom.

Douglas and Saleh were seduced by Wilson’s considerable arm talent as well as his intangibles. Jamison Crowder has called him a baller. Mekhi Becton has called him a problem — for opposing coaches and defenses.