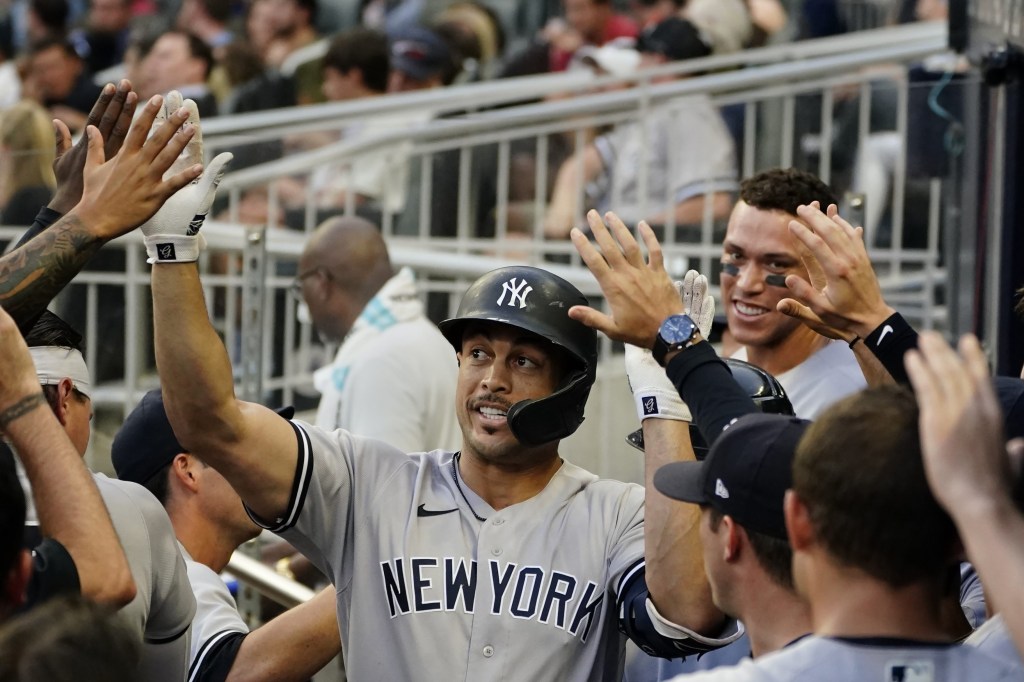 The Yankees continued their stunning turnaround by beating the Braves, a team that was as hot as they were heading into Monday’s game at Truist Park.

Sparked by another strong game from Giancarlo Stanton, who had a solo homer and a two-run double, the Yankees won their season-high 10th straight, with a 5-1 victory.

It’s their longest winning streak since last September and came in the first game between two teams entering with winning streaks of at least nine games since 1901.

With the win, the Yankees pulled to within four games of the first-place Rays in the AL East and began a nine-game road trip with another solid performance from their pitching staff.

Jordan Montgomery allowed just one run despite walking four in five innings. Jonathan Loaisiga and Wandy Peralta pitched three scoreless innings before Aroldis Chapman pitched the ninth in his first appearance since he was unable to close out a win over Boston on Wednesday.

Chapman returned to form with a perfect inning.

It all came against an Atlanta team that, like the Yankees, had won nine in a row and 16 of 18. The Braves were also 10-0 in their previous 10 games against lefty starters.

Stanton gave the Yankees the lead in the top of the second with a homer to right, his 21st of the season, off right-hander Huascar Ynoa.

Dansby Swanson tied it to open the bottom of the inning with a home run to center off Montgomery, who got some help from Joey Gallo in left later in the second, when Gallo made a diving catch near the line to rob Guillermo Heredia of a potential double with one out.

Montgomery got into trouble in the fourth, with back-to-back two-out walks to Adam Duvall and William Contreras.

Following a visit from pitching coach Matt Blake, Montgomery gave up a liner to Heredia, which went right at Andrew Velazquez at short for the final out of the inning.

Velazquez had a two-out double to right in the fifth. Ynoa fell behind Montgomery, 3-1, before Montgomery went down swinging on a 3-2 pitch.

But it hardly mattered, with Stanton in the lineup.

After Ynoa hit DJ LeMahieu with a pitch to lead off the sixth, Anthony Rizzo lined out to center and Aaron Judge flied to right.

Gallo walked to extend the inning and bring up Stanton, who delivered again — this time by ripping a double to left that scored both runners to make it 3-1.

The Yankees then quickly turned to their bullpen, as Loaisiga replaced Montgomery — taking Stanton’s spot in the lineup in the double-switch, with Brett Gardner also entering the game.

Loaisiga struck out four in two spotless innings before Luke Voit pinch hit for him in the eighth after Judge singled and Gallo walked again. A balk by Edgar Santana advanced both runners before Voit walked to load the bases for Gary Sanchez, who ripped a two-run single through the left side of the infield against Jesse Chavez for a 5-1 lead.