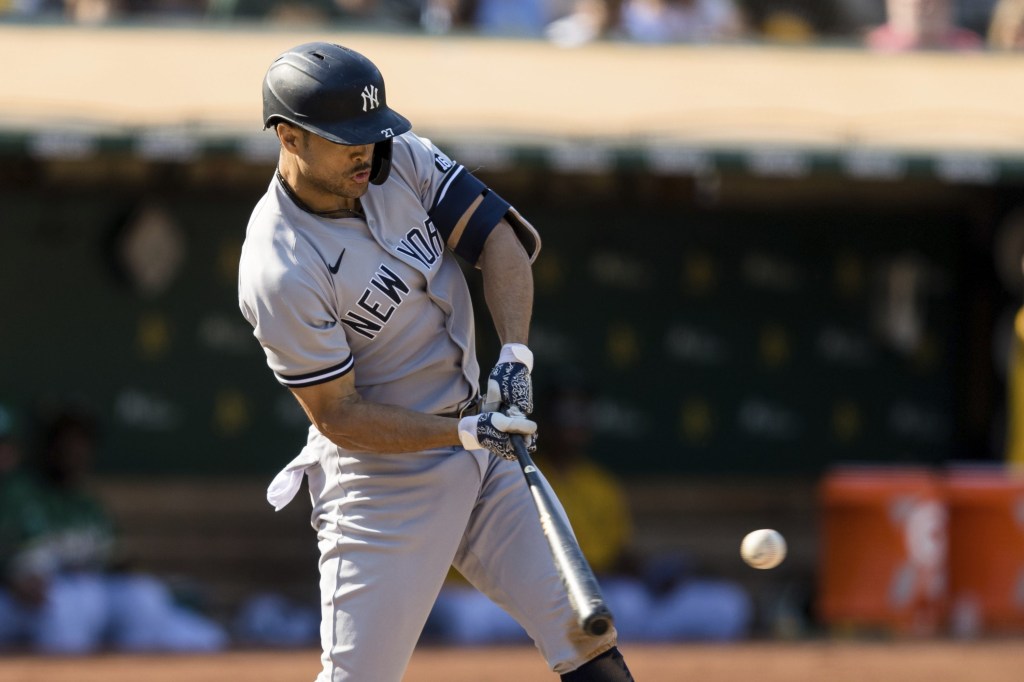 OAKLAND, Calif. — Now the Yankees have a losing streak.

After winning 13 in a row, the Yankees dropped their second straight on Sunday, losing to the A’s, 3-1, as Chad Green allowed a two-run homer to Tony Kemp in the bottom of the eighth.

The loss dropped the Yankees six games back of the front-running Rays in the AL East after Tampa Bay won its seventh straight.

While Green had his share of blame, the Yankees’ lineup sputtered again against the A’s, scoring just an unearned run in the seventh.

Jordan Montgomery allowed just an unearned run in his six innings before Jonathan Loaisiga got out of a bases-loaded jam in the seventh before Green came in.

Green retired the first two batters he faced, with Brett Gardner chasing down a long fly ball to center by Jed Lowrie to open the inning and Matt Chapman grounding to short.

Mark Canha then drilled a line drive over Joey Gallo in left for a double, and then the struggling Gallo didn’t play the ball well.

And Kemp, who pinch hit for Chad Pinder and singled in the seventh, made the Yankees pay, hitting a homer to right on the first pitch he saw from Green.

The Yankees, who scored just two runs in Saturday’s loss, weren’t able to score in the ninth and lost consecutive games for the first time since July 22-23.

The offense got off to a promising start against right-hander Paul Blackburn in the top of the first, as DJ LeMahieu walked on four pitches and Giancarlo Stanton followed with a sharp single to left.

But Aaron Judge lined out to center and Gallo grounded into a double play.

Montgomery needed just five pitches to get through the bottom of the first and pitched around a leadoff single in the second. After Josh Harrison singled to center with two out in the third, Starling Marte hit a ball to the fence in right, where Judge made the catch to end the inning.

Gallo led off the fourth with a single to right, but Luke Voit grounded into the Yankees’ second twin-killing of the afternoon.

The A’s loaded the bases with one out in the fourth.

After Gardner made a fine running catch of Matt Olson’s drive to the warning track in left-center for the first out, Yan Gomes and Lowrie singled. Chapman followed with a chopper to third, where Gio Urshela flubbed it as he tried to turn a double play.

Canha hit a grounder to short and the Yankees initially were credited with a double play that would have ended the threat without a run, but the A’s challenged the call and replay showed Canha beat LeMahieu’s throw to first.

The reversal allowed Gomes to score and put the Yankees in a 1-0 hole with the unearned run.

Montgomery got Pinder swinging to finish the inning and pitched around a pair of one-out singles in the fifth.

Yusmeiro Petit took over to start the sixth, despite Blackburn having thrown just 72 pitches. Petit tossed a scoreless sixth.

Left-hander Jake Diekman walked Gary Sanchez to lead off the seventh and Sanchez moved to second on a wild pitch, but Diekman whiffed Gardner and Gio Urshela.

Anthony Rizzo pinch hit for Wade and caught a break when Gomes dropped his foul pop-up that should have ended the inning before Rizzo hit a grounder that Chapman let go through his legs. Sanchez came around to score the Yankees’ first run — like the A’s first run, it was unearned.

Rizzo moved to second, where he was replaced by pinch-runner Andrew Velazquez.

Chapman was able to snare LeMahieu’s liner to keep the game tied at 1-1.

After pinch-hitter Kemp singled to lead off the bottom of the inning against Loaisiga, Urshela’s rough day continued when he made his second fielding error on a grounder by Marte.

Loaisiga walked Olson to load the bases, but bounced back to get Gomes swinging for the third out.