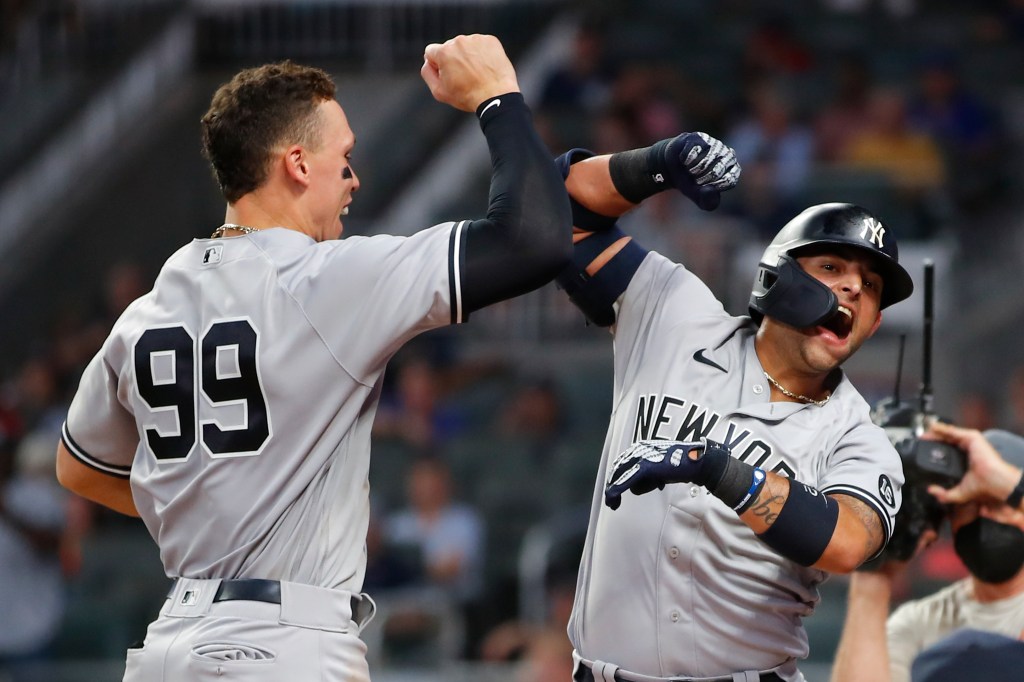 ATLANTA — Not even Aroldis Chapman’s latest meltdown could slow down the Yankees.

They won for the 11th consecutive game on Tuesday night, with a 5-4 victory over the Braves at Truist Park, but not before some more late-game drama and a bailout from Wandy Peralta.

The Yankees led 5-3 in the ninth inning, when Chapman gave up a one-out single to Adam Duvall. With two out, he walked pinch-hitter Ehire Adrianza. Following a visit from pitching coach Matt Blake, Chapman nearly struck out Ozzie Albies, but Albies fouled off a 3-2 pitch and then beat out a single on a grounder to Rougned Odor at third to load the bases.

Chapman then walked Jorge Soler to force in Duvall, cutting the Yankees’ lead to one, and bringing in Peralta to face Freddie Freeman.

Freeman worked another full count before sending a fly ball to deep left, where Joey Gallo made the catch to end it, finally allowing the Yankees to exhale.

It’s the Yankees’ longest winning streak since they won 11 in a row in 1985. That year, they finished in second place in the AL East behind the Blue Jays, but missed out on the postseason.

This year figures to have a different ending, as the Yankees attempt to a run at the Rays for the division title, and to secure at least a wild-card spot.

On Tuesday, they got a two-run homer from DJ LeMahieu and solo shots by Giancarlo Stanton and Odor, plus solid work out of the bullpen — other than from Chapman.

That came after Andrew Heaney gave up a two-run double to Dansby Swanson in the first.

Stanton continued his hot hitting with a homer to lead off the top of the second.

In the fourth, Aaron Judge doubled to open the inning. Gallo whiffed looking and Stanton grounded out, moving Judge to third.

Judge scored on Gary Sanchez’s single to left to tie the score at 2-2.

The Yankees took the lead the next inning when Andrew Velazquez singled and LeMahieu hit a one-out, two-run homer off Braves starter Charlie Morton to make it 4-2. It was just LeMahieu’s ninth homer of the season.

Heaney settled down and allowed just the pair of runs over four innings before he was removed.

Before he left, Heaney got out of a jam in the bottom of the fourth.

With runners on first and second and two out, Heaney appeared to hit Joc Pederson with a 2-2 pitch. But Pederson started to swing and home plate umpire Chris Conroy ruled he went around to end the inning. Pederson argued the call and was ejected.

After getting the first out in the fifth, Albert Abreu gave up a single to Albies and walked Soler. He was yanked for lefty Joely Rodriguez, who got Freeman to ground out to third.

The Yankees weren’t able to turn the double play, leaving runners on the corners with two out for Austin Riley.

Riley singled up the middle to score Albies, and Freeman tried to come all the way around from first. Judge raced over to field the ball and fired to Velazquez, who made a strong throw to Sanchez at the plate.

Sanchez applied a swipe tag on Freeman, but he was called out. Replays showed he might have been safe and the Braves challenged the play, but the out call was upheld, leaving the Yankees ahead by a run.

Richard Rodriguez came in for Atlanta to start the sixth, after Morton had whiffed nine in five innings.

Odor led off the seventh with a long homer to right off former Yankee Chris Martin.

Chad Green tossed a scoreless bottom of the seventh before giving up consecutive singles to Freeman and Riley with one out in the eighth.

With Atlanta down by two runs, Riley foolishly tried to get to second on the play and was thrown out for the second out. Green got Swanson to ground to third to end the inning.