Yankees hold on after fast start for critical win over Rangers 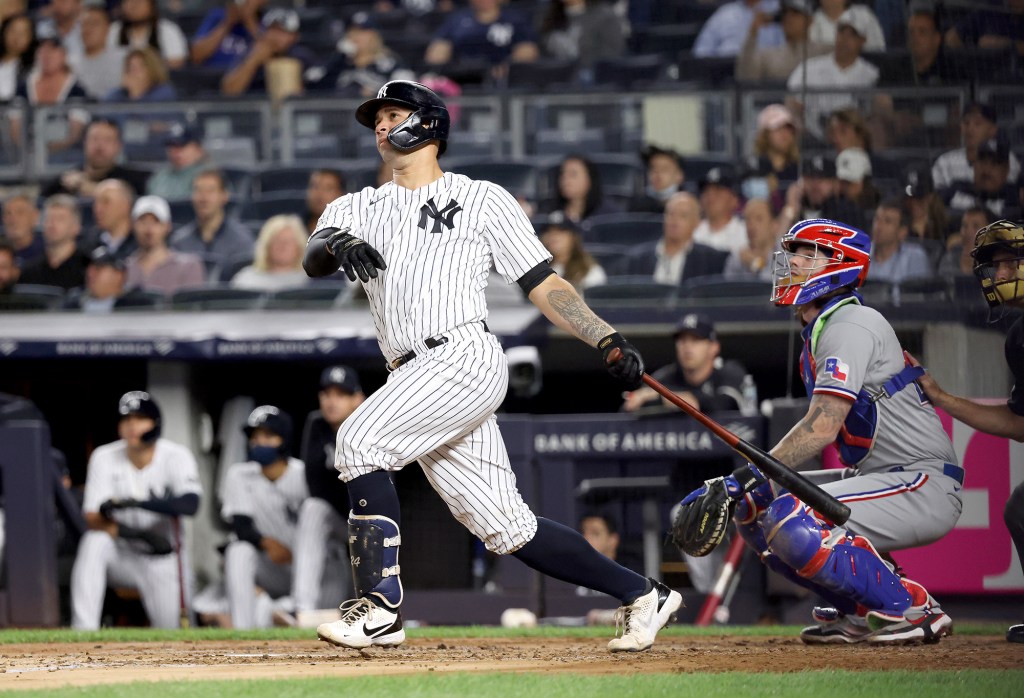 
If the Yankees are going to get one of the two AL wild-card spots, they’ll need to hold their own against the Red Sox and Blue Jays starting later this week.

For now, though, Aaron Boone said his team’s focus is simple: “Take care of business tonight.”

It’s something the Yankees haven’t done enough against some of their recent bad opponents, but they were able to hold on against the Rangers, 4-3, on Monday night.

After opening up an early four-run lead and seemingly poised for a lopsided victory over a team that had lost four of five, the Yankees instead had to once again hold on for dear life.

They didn’t score after the third inning and needed four relievers to keep Texas scoreless over the final 4 ²/₃ innings.

He allowed back-to-back singles to lead off the game, as Isiah Kiner-Falefa flared one to right and Andy Ibanez singled through the shift.

With Adolis Garcia at the plate, a wild pitch — that should have been blocked by the struggling Gary Sanchez — put runners on second and third with no one out.

But Cortes responded by striking out Garcia, DJ Peters and Nathaniel Lowe to get out of the 23-pitch inning unscathed.

He went on to retire 11 in a row following the opening singles.

Sanchez homered on a 3-1 pitch with two outs in the second to give the Yankees a 1-0 lead.

DJ LeMahieu walked with one out in the bottom of the third and Anthony Rizzo followed with a near-homer to right on the first pitch of his at-bat that went just foul. He did the same on a 1-2 pitch before finally punching an opposite-field single to left.

Aaron Judge’s single to center scored LeMahieu and a wild throw home by Leodys Taveras allowed Rizzo to get to third and Judge to second.

A sacrifice fly from Giancarlo Stanton and a Gleyber Torres RBI single made it 4-0.

The Yankees failed to add to their lead in the fourth after LeMahieu and Rizzo walked with one out and Alexy was replaced by Jharel Cotton.

Consecutive walks by Cortes with two outs in the fourth drew a visit from pitching coach Matt Blake and Cortes got Jonah Heim swinging to end the inning- although Cortes was at 82 pitches through the four innings.

It caught up to the lefty in the fifth inning, as Charlie Culberson led off with a homer off the left-field foul pole, Tavares followed with a ground-rule double and scored on Kiner-Falefa’s double down the right-field line to cut the Yankees’ lead to 4-2.

Cortes was replaced by Green with one out in the fifth.

Green got Ibanez to fly to center for the second out, but a wild pitch with Garcia at the plate allowed Kiner-Falefa to get to third and he scored on Garcia’s sacrifice fly and the Yankees led by just a run.

Holmes pitched a scoreless seventh, but gave up a leadoff bloop hit to Ibanez in the eighth.

With runners on first and second and two out, Rodriguez got Nick Solak on a check swing strike three, generously called by home plate umpire Dan Iassogna, for the final out.