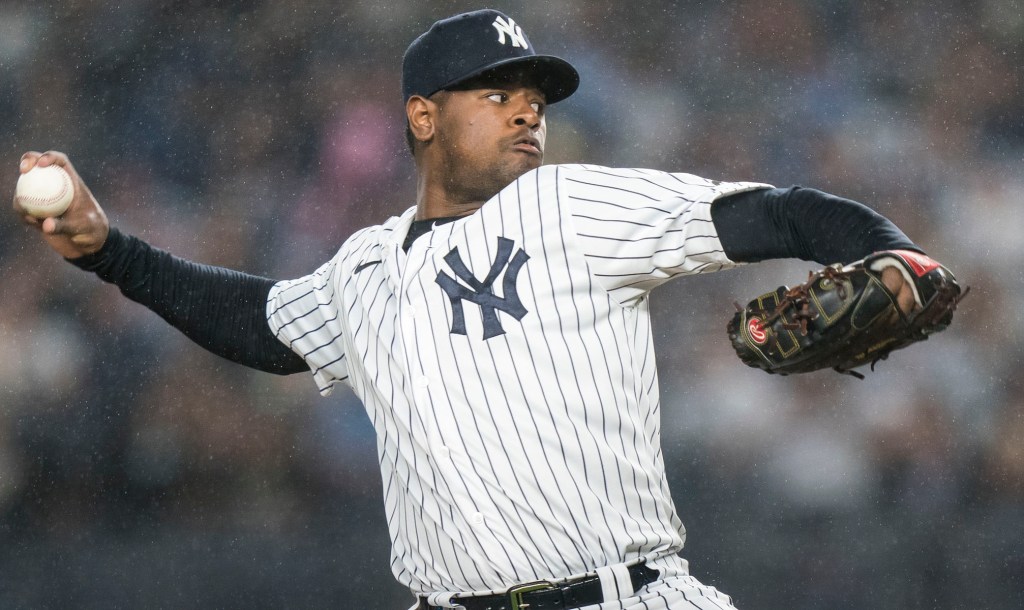 
The Yankees have 10 games left in the regular season.

Beyond that is anyone’s guess, but with another win over the Rangers on Tuesday night, they are setting up for what manager Aaron Boone called an “exciting” stretch run.

“Because you do want to be playing meaningful games this time of year and we certainly are,’’ Boone said before the Yankees beat Texas, 7-1, in front of just 23,335 in The Bronx. “I wish they were a little less meaningful at this time [and] that we had things sewn up, but that’s not the case.”

They entered the night still chasing Boston and Toronto for the two AL wild-card spots, but have taken advantage of facing the last-place Rangers with consecutive wins.

Jordan Montgomery continued to pitch well in the second half, allowing just one run in 5 ²/₃ innings. He’s now pitched at least five innings and given up one or fewer runs in eight of his last 10 starts.

Unlike in many of the left-hander’s starts, the Yankees managed to produce at the plate, with Giancarlo Stanton, Joey Gallo and Aaron Judge all going deep.

To complete the night, Luis Severino made his long-awaited return from Tommy John surgery, pitching a scoreless eighth and ninth inning in his first appearance since the 2019 postseason.

The Yankees initially had trouble breaking the game open against right-hander Dane Dunning.

With one out in the bottom of the first, Anthony Rizzo was hit by an 0-2 pitch. Judge followed with a double to right-center, sending Rizzo to third.

Stanton’s broken-bat groundout scored Rizzo to give the Yankees a 1-0 lead.

But Judge was stranded on second when Gallo struck out.

They squandered another scoring opportunity in the second.

Brett Gardner’s one-out double moved Gleyber Torres to third, but Gio Urshela whiffed and DJ LeMahieu grounded out on a nice play in the hole by Isiah Kiner-Falefa, as the Yankees went 0-for-4 with runners in scoring position in the first two innings.

The Yankees added to their lead in the third, as Stanton turned on a 0-1 slider and hammered it into the left-field seats to make it 2-0.

Montgomery faced his first trouble in the fourth, thanks to a leadoff walk to Kiner-Falefa and a long single by Andy Ibanez put runners on the corners with no one out.

He struck out Adolis Garcia for the first out, but the third strike got away from Gary Sanchez and the wild pitch moved Ibanez to second.

A Nick Solak groundout drove in Kiner-Falefa to cut the Yankees’ lead to 2-1.

Three straight singles to open the bottom of the fifth gave the Yankees another run, as Rizzo knocked in Urshela and the Yankees went up, 3-1.

But that was all the Yankees got, as Judge grounded into a force out and Stanton hit into a double play.

Montgomery ended his night by retiring eight straight before Ibanez lofted a double to right with two outs in the sixth.

Mike King got Garcia to end the inning.

Gallo led off the bottom of the inning with a towering homer to right for a 4-1 lead and King went on to fan the side in order — all looking — in the seventh.

Judge then put the game away with a three-run blast in the bottom of the seventh, his 36th homer of the year.

That gave Severino and the Yankees plenty of cushion, as Severino entered to start the eighth after being activated prior to Monday’s game.

Severino pitched around a two-out double in the eighth and a one-out single in the ninth.

Why Phil Collins is still touring despite health issues

Adam Devine to star in ‘Pitch Perfect’ spinoff on Peacock