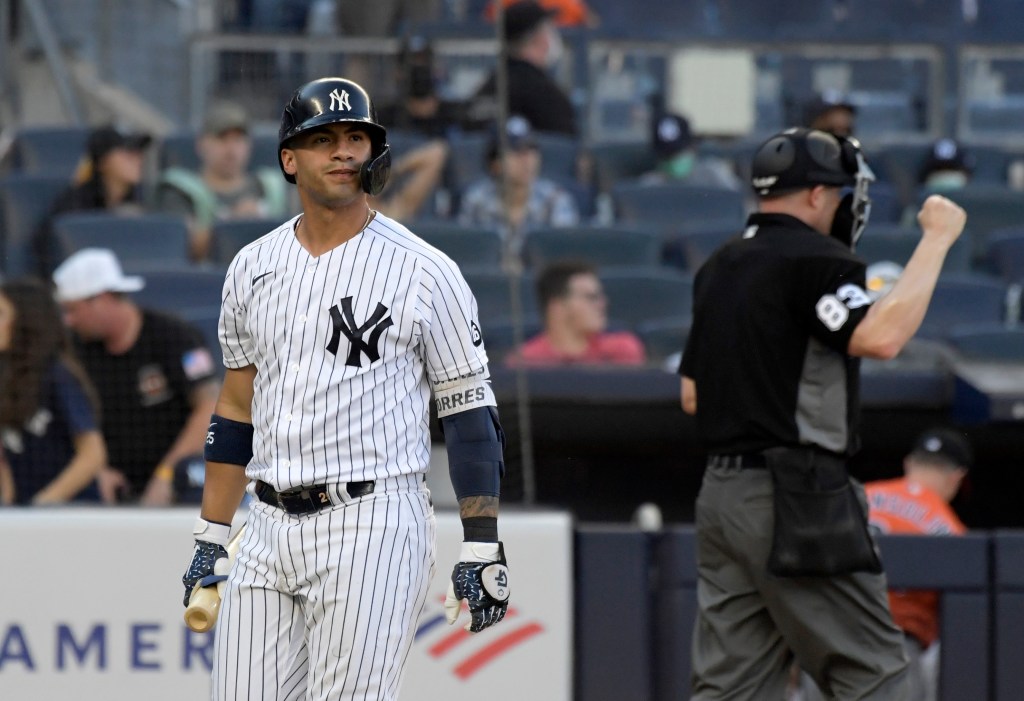 
A brutal season for Gleyber Torres is only getting worse.

The shortstop said he expected to play Wednesday, but was benched for a second straight game, with Aaron Boone going with Andrew Velazquez against the Blue Jays.

And Boone didn’t guarantee when Torres would be back in the lineup.

The move comes on the heels of Torres making defensive miscues in consecutive games after returning from an injured-list stint due to a sprained thumb.

On Sunday, Torres played a routine grounder poorly, which resulted in a generously ruled infield single, and then he made a fielding error the following day before sitting Tuesday.

Boone said he and Torres have “spoken a lot over the last few days about different things. I expect him back in there at some point.”

Torres said he wanted to keep the discussions he had with Boone private.

“I’m prepared to get another opportunity to play and be ready to be in the game,’’ Torres said. “Anything can happen. I can help my team in any situation. I’ll be ready to play when they tell me.”

It’s just the latest setback for the 24-year-old, who two years ago was one of the rising stars in the game, but now looks lost on both sides of the ball.

He continues to struggle at short, and his once powerful bat has disappeared each of the last two seasons.

“I feel disappointed in myself because I know I’m better than I am right now,’’ Torres said. “I feel like I prepared myself really well in spring training and [didn’t] get the results I want.”

“Hopefully, I get another opportunity next year and keep going,’’ Torres said. “Right now, we have 20-something games [left in the regular season]. I’ll be ready and prepared. My mentality is to play in the postseason.’’

Torres said he’s equally bothered by his ineffectiveness with his glove and his bat.

“I remember in spring training, I didn’t make any errors for almost a month,’’ Torres said. “And now this part of the season, I start to make errors. It’s frustrating because I prepare myself really well. Hitting-wise, too. I’m a guy that prepares myself really well. I know I can do really special things on the field for my team.”

While there’s little he can do to salvage this year, Torres hopes to use it as wisely as he can.

“I don’t do too much this year, but it’s a year of experience for me,’’ Torres said. “I’ll take the bad situations with the good. I’ll take this experience and hopefully next year I can do better.”

Boone said he also has been impressed by what The Bronx native Velazquez has done.

“There’s definitely an energy he’s brought,’’ Boone said. “That’s born out of playing well. … I feel like he’s swung better than his numbers. He’s very much held his own at the plate, he’s a good shortstop, runs the bases really well, is a really good base-stealer. He’s done a little bit of everything for us.”

Logan Ryan to Giants fans: We’ll bring the wins, you bring the energy