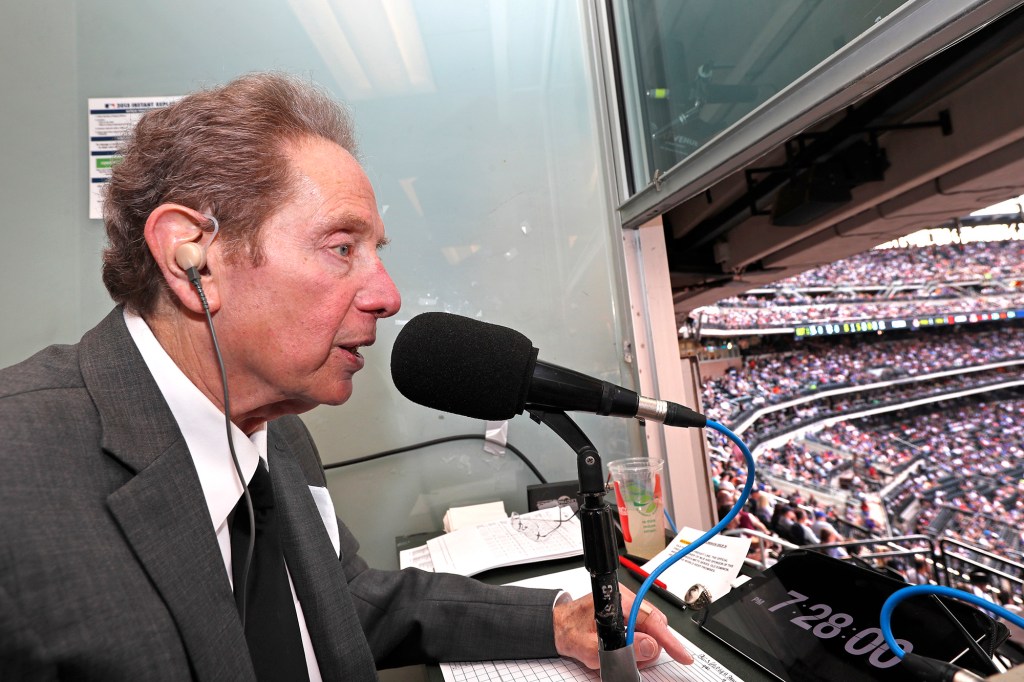 
The Spanish-Language radio voice for the Yankees helped fellow announcer John Sterling out of a flooded car Wednesday night as the remnants of Hurricane Ida wallopped the area.

Rickie Ricardo appeared on the “Moose and Maggie Show” on WFAN and detailed the tale, which ended with him helping the 83-year-old Sterling out of his car and into Ricardo’s SUV to drive him the final half-mile to his home.

Ricardo said he received a phone call on his way home from Yankee Stadium — where the Yankees announcers have been broadcasting road games because of COVID-19 — from Sterling’s on-air partner Suzyn Waldman.

Waldman said Sterling was stuck on the side of River Road in Edgewater, N.J. after leaving The Bronx following calling the Yankees’ 4-1 win in Anaheim against the Angels.

“Suzyn asked me where are you?’ I said, ‘I’m working my way across upper Manhattan to get to the [George Washington] Bridge to get to New Jersey,’” Ricardo said during the radio interview. “She says ‘John is stuck on River Road in Edgewater.’

“Now, I know for years, I’ve seen how bad it gets flooded on River Road in Edgewater, and with the kind of rain we had, I can only imagine. So I said, ‘Suzyn, I’m on my way. I more or less know where he lives. I’ll figure out where he’s at and see what I can do.’”

Once Ricardo got over the bridge he attempted to reach Sterling’s cell phone, but with service “kind of spotty” it took “about 10 tries” for John to answer.

“Very calm, I say ‘John, it’s Rickie, where are you?’” Ricardo continued. “John is in the dark, because all the lights are out, and trying to describe to me where he’s at. ‘Oh, I’m in front of this Chinese restaurant, on the corner is a bagel shop.’ He’s in his car and the water’s rising, so in my mind’s eye, I’m trying to figure out where he is.

When Ricardo arrived at the marina area that Sterling described, he claims he saw “at least 25 cars stranded in all different directions” until finally recognizing his friend’s car.

“I pull up and John says ‘Is that you?’ I said, ‘Yeah it’s me. I’m flashing my lights I’m now behind you, I’m as close as I could get,” Ricardo said. “Because his car, his wheels, now are completely covered by water. [There’s] water in the cabin. I get as close as I can and said ‘Let me help you out.’

Ricardo says he then rolled up his pant legs and told Sterling to collect his registration and whatever he needed from his car before helping him outside.

“John gets out, we wade our way through the water,” Ricardo said. “I get him into my Jeep. We finally get John settled. He’s a little shell-shocked and I don’t blame him. And then the adventure is to get the extra half-mile from where he was stranded to his apartment. No more than a half a mile. It took us about an hour.”

Ricardo said they were aided by “very nice” North Bergen and Edgewater police officers when they encountered multiple closed roads during the short-distanced drive.

“It was a jigsaw puzzle and I finally got John home, wet, about an hour and a half, maybe close to two hours after the game ended,” Ricardo said. “By the time I dropped John off at his building, I live about a mile from him, and that took me another hour, literally. So I got home about 1:15 in the morning. It was amazing.”

Ricardo was slated to fly home to Florida on Thursday’s off-day for the Yankees, but his morning flight from Newark was delayed and ultimately canceled.

Earlier in the interview, he’d stated that the lobby at Yankee Stadium also was “completely flooded” with “water above your ankle” when he departed following the game.