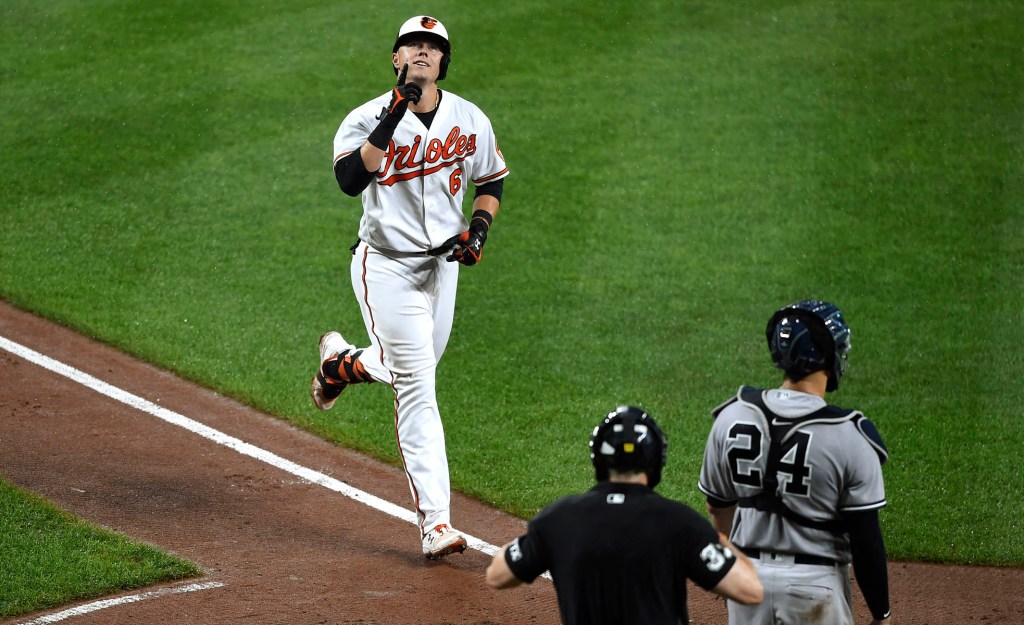 The Yankees were one strike away from a fourth straight win that would have moved them back into the wild-card lead, but instead they added to their list of ugly defeats with a 3-2, 10-inning loss to the lowly Orioles on Thursday night at Camden Yards.

BALTIMORE — The Yankees were one strike away from a fourth straight win that would have moved them back into the wild-card lead, but instead they added to their list of ugly defeats with a 3-2, 10-inning loss to the lowly Orioles on Thursday night at Camden Yards.

“I look at the scoreboard all year,’’ manager Aaron Boone said before the game about the wild-card race. “The good thing is we’re in control of what we do. We’re certainly paying attention to what’s going on.”

Clinging to a one-run lead in the ninth, the Yankees sent right-hander Clay Holmes back out for a second inning.

Aroldis Chapman had pitched three days in a row and Chad Green has been used heavily, so the Yankees stayed away from them.

Holmes allowed a one-out single to DJ Stewart. Pinch-runner Kelvin Gutierrez moved to second on a wild pitch and to third on a Pat Valaika grounder to third before scoring on another wild pitch by Holmes to tie it at 2-2.

After the Yankees failed to score in the top of the 10th, Wandy Peralta gave up a bunt hit to Richie Martin, sending pinch-runner Jahmai Jones to third.

An intentional walk to Cedric Mullins loaded the bases for Ryan Mountcastle, who struck out.

Peralta fell behind Austin Hays 3-0 before the outfielder singled to left to end it.

The meltdown wasted a solid outing from Jordan Montgomery, who had a career-high 12 strikeouts in just 5 ²/₃ innings.

But the Yankees got a pair of runs in the second inning and that was it.

Joey Gallo hit a solo homer to right with one out. Then, after Gary Sanchez and Tyler Wade walked, Gio Urshela hit an opposite-field double to right. Sanchez scored and Wade went to third.

The rally stopped there, though, when Brett Gardner popped out with the infield in for the second out and Giancarlo Stanton grounded to second. That proved costly.

In the fifth, Stanton singled with one out before right-hander Chris Ellis was replaced by lefty Fernando Abad. Anthony Rizzo crushed a double to the wall in right-center, but the slow-footed Stanton couldn’t score.

Gleyber Torres was walked intentionally to load the bases and Gallo flied out to deep center to keep it a two-run game.

A night after Nestor Cortes Jr. whiffed 11, Montgomery did him one better.

After an easy, nine-pitch first inning, Montgomery pitched around a leadoff single by Anthony Santander and two wild pitches in the second.

But after the rain picked up in the top of the sixth and the umpires met with the grounds crew in the middle of the inning, Montgomery immediately fell behind Mountcastle 2-0 before he gave up a long leadoff homer to center to cut the Yankees’ lead to 2-1.

He also recovered from back-to-back one-out singles in the third by striking out Mountcastle and getting Hays to ground out.

Montgomery got the next two batters, but walked Ramon Urias to end his outing.

Albert Abreu came on and struck out Stewart, who was pinch-hitting.

Stanton drilled a 120 mph one-out single in the seventh that probably would have gone for a double down the right field line if it didn’t hit first base umpire Lance Barrett — which allowed Mountcastle to field the ball not far from first base. The Yankees didn’t score in the inning.

Torres led off the top of the eighth with a single and tried to steal second with one out. After initially being called safe, the play was reviewed and the call reversed.

After Abreu tossed a scoreless inning, lefty Joely Rodriguez got the final out of the seventh.