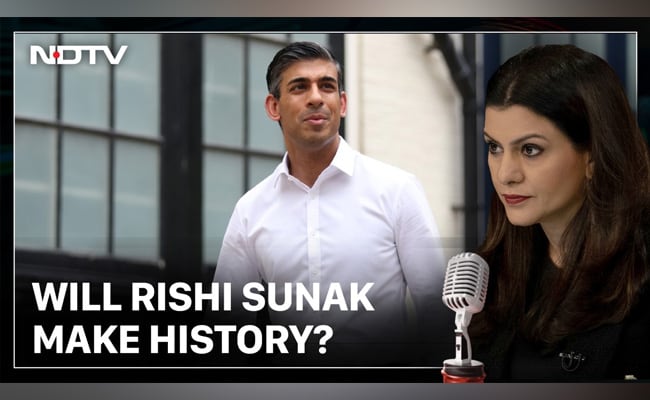 Hi, this is Hot Mic and I’m Nidhi Razdan.

42-year-old Rishi Sunak is tantalisingly close to becoming the next Prime Minister of the UK. The former Finance Minister could make history if he does indeed win the leadership contest in the Conservative Party on the 5th of September, catapulting him to the top job to succeed Boris Johnson. He could become the first Indian origin Prime Minister of the UK. But significant challenges remain. While Sunak is clearly very popular among party MPs, that’s not the case with the wider members of the Tory Party. And the final vote on the leader will consider the votes of all 160,000 members of the Conservative Party. According to a YouGov poll done earlier this week, of Tory party members, Sunak would actually lose the final round by a wide margin. Sunak knows this and is now spending a lot of time trying to appeal to the base of the Tories, releasing videos where he calls himself a real Brexiteer, showing how he backed Brexit from day one, amongst other things. The contest has also become deeply bitter and personal, with Rishi Sunak’s wealth and the wealth of his wife – the daughter of Infosys founder Narayana Murthy becoming tabloid headlines.

Reports say Boris Johnson is furious that Sunak resigned as his Finance Minister, triggering-off a series of resignations in the government that forced Johnson to announce that he too was stepping down. Miffed with what he sees as being stabbed in the back, Johnson is said to be plotting hard to ensure that anyone but Rishi Sunak becomes the next Prime Minister of the UK. So how did Rishi Sunak get here?

Born in 1980 in Southampton, Rishi Sunak had a life of privilege. He attended a prestigious private school called Winchester College, where he was the head boy and the editor of the school paper. Later, he attended Oxford University, where he studied philosophy, politics and economics. After that, he pursued an MBA at Stanford University in the United States on a Fulbright scholarship. It was here that he met his future wife, Akshata Murty. They now have two daughters. From 2001 to 2004 Rishi Sunak worked for Goldman Sachs, moving on to become a partner in two hedge funds which helped small British companies to grow. In 2015, he was elected as an MP from Richmond in Yorkshire on a Conservative Party ticket. Sunak later became a junior minister in Theresa May’s government and was made Chief Secretary to the Treasury by Johnson in 2019. He got the big job as Chancellor or Finance Minister in February of 2020. Sunak was widely praised during the pandemic for helping British businesses and employees as they faced unprecedented losses due to the lockdowns. But after that, when he raised taxes just as the UK began dealing with the cost of living crisis, Sunak was accused of being out of touch with the reality of ordinary folks who were struggling to make ends meet. His wealth and privilege have often made him the target of critics. In 2001, he was interviewed along with his parents for a BBC documentary, about the middle classes, during which he remarked that “I have friends who are aristocrats, I have friends who are upper class, I have friends who are working class. Well, not working class.” Needless to say, that video clip has gone viral all over again.

His wife, Akshata Murty, a billionaire heiress, has come under a lot of scrutiny for her background and for avoiding high taxes in the UK, thanks to a law that allows non-domiciles to skip taxes on income earned abroad. It’s all perfectly legal, but it did raise moral questions. Following a huge media outcry, Murty announced In April that she would pay UK taxes on her global income, adding in a statement that she did not want the issue to be a distraction for her husband. In the Sunday Times Rich List of 2022, which ranks the wealthiest people in the UK, Sunak and Murty were placed at 222nd, with an estimated combined wealth of £730 million. Addressing all of this head on, Rishi Sunak recently said, “there is a commentary about my wife’s family’s wealth. So let me just take that head on because I think it’s worth doing, because I’m actually incredibly proud of what my parents-in-law have built.”

The question is, will Rishi Sunak get past all of this and ultimately make history as the first Indian origin Prime Minister of the UK? For that, you’ll have to watch this space.