Wide receiver has evolved into ‘premium position’ in college football 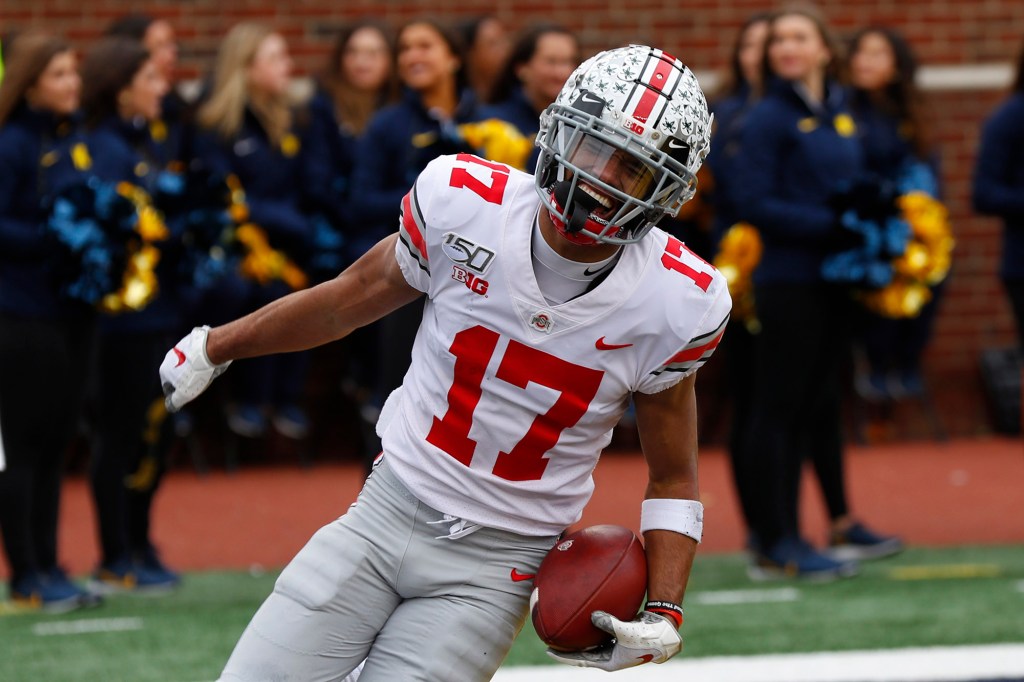 
After a 29-year drought, DeVonta Smith broke through for wide receivers everywhere.

Last January, the Alabama superstar became the first wideout to win the Heisman Trophy since Michigan’s Desmond Howard in 1991. He followed that up with a dominant performance in the College Football Playoff, producing 19 receptions for 345 yards and six touchdowns to lead Alabama to a perfect season, on his way to being selected by the Eagles with the 10th-overall pick in the NFL draft.

But Smith was not necessarily an outlier. He was merely continuing a growing pattern that has seen the value of receivers increase in the college game.

Recent national champions have featured either one dominant receiver like him, or a pair of them. LSU had Ja’Marr Chase and Justin Jefferson in 2019. Clemson had Tee Higgins and Justyn Ross the year before. The season prior, it was Calvin Ridley and Alabama, and before that it was Clemson and Mike Williams.

McElroy pointed to Georgia, which has stacked top recruiting classes, premier defenses, high-end running backs and quarterbacks now in the NFL yet has fallen short of the ultimate goal. The one shortcoming: receiver.

There are a variety of reasons for this trend, according to multiple analysts, coaches and players. At the top of the list is the up-tempo spread style so many teams utilize now that is predicated on stretching the field and creating mismatches. These systems don’t work without game-changers on the perimeter. Dusty Dvoracek, a former defensive lineman who played for Oklahoma and was a third-round pick of the Bears in 2006, described the game he played in as one in a phone booth, so different from the current sport.

“It’s a space game [now],” said Dvoracek, a college football analyst for ESPN and SiriusXM. “In some regards, it’s basketball on grass.”

With stricter rules that limit big hits to avoid injury and handcuff defensive backs, in addition to offensive linemen being allowed to block 3 yards downfield, it is harder for defenses to contain the top passing attacks. Not to be diminished, though, is what happens before these players arrive in college.

It’s not just the NFL and college that now emphasize the passing games. More and more high school teams run spread offenses, 247Sports.com national recruiting analyst Brian Dohn said. Seven-on-seven tournaments and leagues have grown in popularity, as has flag football for even younger players. As a result, far more elite receivers are being produced.

More receivers have been drafted high in recent years. In the past eight years, 18 receivers have gone in the top 20 of the NFL draft, compared to 11 the previous eight years. That has added to top athletes wanting to play the position, Ohio State star receiver Chris Olave said.

Football has become a year-round sport, and it is easier to sell kids on catching long touchdown passes than lining up in an I-formation.

“You’re trying to get the ball in the hands of your best athlete even at the high school level, and you’re seeing more and more the receivers are the ones that are making plays,” Dohn said. “It comes down to, if that’s what they’re doing in high school, they’re going to bend it that way in college.”

Dvoracek has noticed tackle football has started at a later age in so many places — his kids play flag football — and that has in part de-emphasized linemen and the running game. If you can’t practice tackling, you work on other facets of the sport.

“We’re teaching kids a lot of these passing elements at much younger ages,” Dvoracek said.

The result is the added importance of receivers and the vertical attack. Perhaps the best example is Alabama. When Nick Saban’s dynasty in Tuscaloosa began, it was built on smash-mouth football. Running the ball down the opposition’s throat. In recent years, though, the Crimson Tide has evolved into a more aesthetically pleasing team that can score from anywhere on the field — producing NFL receivers like Smith, Jaylen Waddle, Amari Cooper and Ridley, among others.

The projected top teams in the nation this year — Alabama, Clemson, Ohio State and Oklahoma — all are loaded with top-end talent at receiver. It’s likely this year’s national champion will feature a premier wideout.

“That’s definitely something the great teams have,” Indiana quarterback Michael Penix Jr. said. “They have somebody they can depend on and go up and make big plays at any moment.”

Perhaps someone will replicate Smith’s unforgettable season. Olave, one of the top returning receivers in college football, got an up-close look at Smith in last year’s national championship game defeat. He could be the latest receiver to lift his team to a title.

“That definitely motivated me,” Olave said, “to have a season like that.”