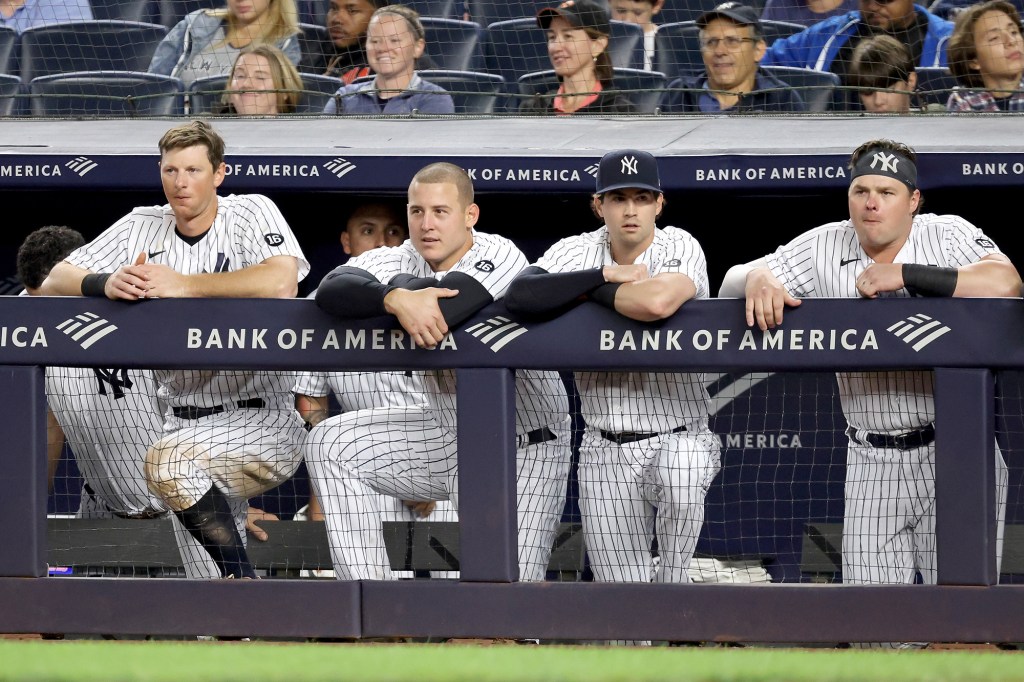 In retrospect, it is hard to believe that in the middle of the season, the Yankees had a lot more explaining to do than the Mets did. Hal Steinbrenner called a press conference to blame his players for putting their manager, Aaron Boone, and general manager, Brian Cashman, in harm’s way.

“I am aggravated, frustrated, angry,” the owner said on July 1 of his team, then 41-39, though he chose not to act on those emotions. Cashman ultimately made his big trade-deadline moves, and the Yankees did just enough winning over time to find themselves tied with the Blue Jays for the second wild-card spot entering their Wednesday night game with the Rangers in The Bronx.

All in all, the Yankees have played a season best described as maddening. They delivered a winning streak that even the 1998 powerhouse couldn’t touch, the franchise’s longest streak in 60 years. And yet they suffered enough inexplicable losses to enough unworthy opponents to leave their fans terrified of missing the playoffs.

So here comes the good news. Starting Friday at Fenway Park, the Yankees will play their final nine games against the beasts of the AL East — the Red Sox, the Blue Jays and the Rays. Those games will finally answer the questions that have hovered uneasily over the 2021 Yankees for the better part of six months:

Were they always legitimate and opportunistic contenders, just waiting for end-of-season pressure to propel them to a higher level of achievement?

Or were they always counterfeit goods?

“This is who we’re up against, right?” Boone said of the opponents on deck. “[We’re] fighting for the same thing. You should want it no other way, and we’re going to find out. I think when you’re fighting for a couple of spots between a few teams, the fact that you get to settle it mano a mano on the field, I think that’s the way it should be.”

No question. The Yankees don’t control their own destiny, if only because the definition of the word strongly suggests that nobody does. But what else would be better for these Yankees than having Boston and Toronto right in front of them over the next six games, before returning home to face a Tampa Bay team that will likely be in cool-down mode with the division title clinched?

The possibilities were exciting enough for Gerrit Cole, Friday night’s starter, to compare his Yankees to ancient warriors who — at least by the telling of one Cole friend — toughened up by engaging in war games with the most fearsome available enemies. “Sure we’ve lost some battles,” the ace said, “but we still have the war ahead of us.”

Cole might have been better off just saying that pressure is a privilege.

Either way, now that injuries and COVID-19 have forced them to use a franchise-record 59 players, the Yankees have a lot of things working in their favor. They have the Twin Towers, Aaron Judge and Giancarlo Stanton, healthy and swinging heavy lumber at the same time. They have a healthy $324 million pitcher to set the tone against the Red Sox, even though Cole has surrendered eight earned runs over 10 innings in his two Fenway starts this year.

The Yankees also have a feel-good story in Luis Severino — back after a two-year battle with injuries — to create the kind of emotional boost a team often needs at the end of an endless regular season.

“I hope so and I think so,” Boone said when asked if Sevy’s return could have a positive impact on his team’s playoff push.

“To see how the team reacted to him [Wednesday] night, just even when he first came in, being up on the bench and the excitement that guys had, and the appreciation for knowing the road that he had been down to get to that point after missing so much time. And we’re talking about obviously a really good pitcher in this game. … Hopefully that is something that can be a little bit of an inspiring, or another level of pick-me-up at this time of year when you’re really grinding.”

In other words, the Yankees have everything they need to qualify for the one-and-done wild-card shootout. It would require them to finish third in their division rather than fourth, which really shouldn’t be too much to ask of them.

First, the Yankees had to dispose of the Rangers, a team with a Triple-A offense. It shouldn’t have been a problem, but then again, it’s baseball. Anything was possible.

But win or lose against Texas on Wednesday night, all remaining questions about the 2021 Yankees would be answered over their final nine games, especially this one:

Were they always the real deal, or just a cruel six-month hoax?

Upgraded Devils face questions in taking the next step