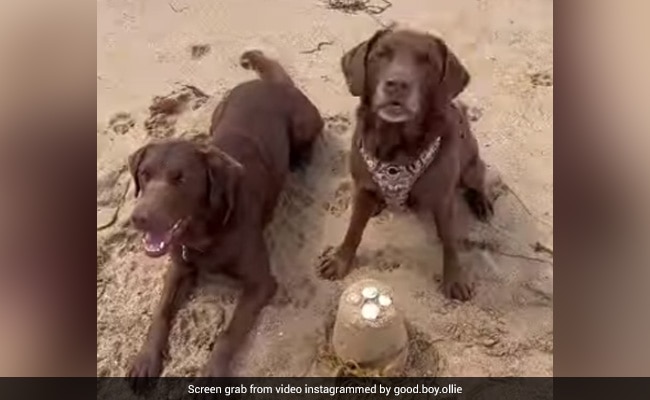 Ollie and Hector both also searched for seashells to decorate their beach castle.

A video is taking rounds on internet which shows two pet dogs playing with each other in sand and making their first sand castle together.

The video was shared on Instagram by Good Boy Ollie on June 26. It shows that every week, the dog gets to choose a sheet of paper from a box with an exciting activity written on it. It turned out to be creating a sand castle this week.

“Wait to see what happened at the end. It’s okay… @hectorthechocolabo said sorry and helped build a new one,” reads the caption.

The viral video begins with one of the dogs picking its surprise activity and then going on a beach to finish it. When the dog gets at the beach, it is surprised to see its best buddy, another dog named Hector, there. The pair then combines paws to construct a lovely sand castle.

They can be seen collecting sand in a bucket. Ollie’s owner is seen helping them taking the bucket after collecting the sand, leaving the castle on the ground.

Ollie and Hector both also searched for seashells to decorate their beach castle. They can be seen grabbing a few shells after getting ready.

The video has received over 1.3 million views and around 1.4 lakh likes since being posted.

Users have flooded the comment section with heartfelt remarks.

“The face after Hector jumps on the castle. love these two,” wrote a user.

A third user got disappointed and write, “Hector no.”