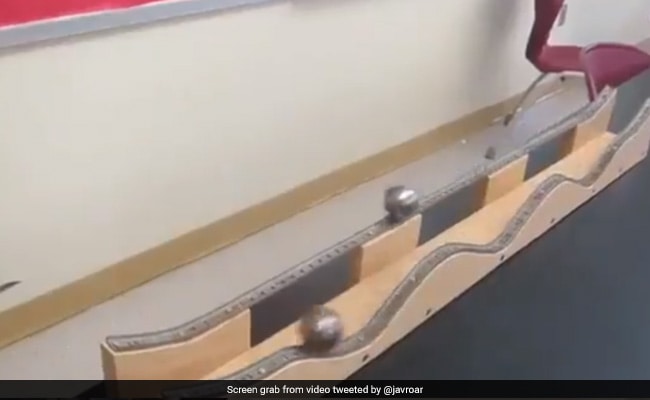 The video explains an important life lesson with the help of an experiment.

Internet is full of videos, which convey some important life lessons and cheer up people when they are down. One such video is going viral on social media that uses a scientific concept to share an important message.

It shows a man releasing two steel balls – one on a straight path and another one having bumps along the way. The ball on the second path returns early than the first one.

“Proof that going through ups and downs in life wiIl heIp you get farther,” said the accompanying tweet.

Proof that going through ups and downs in life wiIl heIp you get farther.. pic.twitter.com/OlpLLhHuaG

The video has been shared by user @javroar on Twitter and viewed more than seven million times. Over 36,000 users have retweeted it with 2,23,000 likes.

“This is true if you’re a silver ball or Sonic the Hedgehog,” said a user. “Dear (whomever is reading this), Look at the video below. Embrace the messy ups and downs,” said another.

“I no longer have borderline personality disorder,” said a third comment.

Some content creators and personalities too have taken upon themselves to share important life lessons with their followers and social media users. Prominent among them is industrialist Harsh Goenka.

He recently shared a clip about the relationship between a parent and child on Twitter. It resonated with many people, including industrialist Anand Mahindra.

In the 2-minute, 20-second clip, children were equated with pencils, and parents with erasers.

The clip began with the pencil saying “sorry” and the eraser asking, “for what”. The pencil then explains about the mistakes it made in life and how erasing those mistakes take away a part of parents each time.

But the rubber replies, “That’s true, but I don’t mind. You see, I was made to do this. I was made to help you each time you did something wrong. Even though one day I know, I’ll be gone, I’m happy with my job. So please, stop worrying. I’ll not be happy if I see you sad.”

Replying to Mr Goenka, a user said that it was “a touching message”.