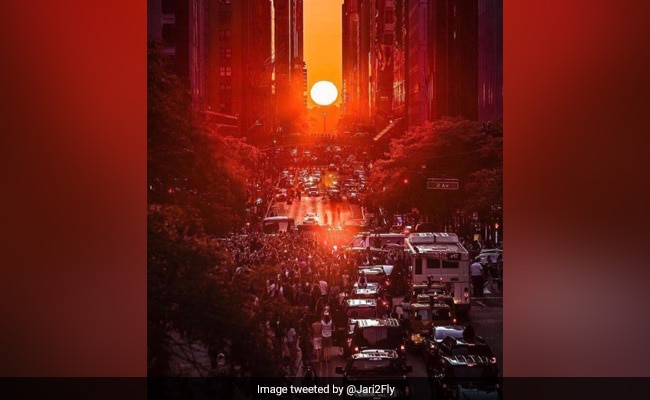 The big gathering of people was clicking photos of the spectacular sunset on a busy Manhattan street.

Sunsets have a natural undefined beauty, and there are huge sunset lovers all over the world. People have their own lists of places where they can experience the moment. But in New York, people stopped traffic to capture beautiful sunset.

The big gathering of people was clicking photos of the spectacular sunset on a busy Manhattan street.

Shared by a user named Kira on Twitter, the caption of the post reads, “New York city is not real LMAOO.”

The video has been captured by the woman from a car. She showed the excitement of the people about the sunset, who wanted to capture in their mobile phones and cameras.

The video also shows a dancer dancing in the middle of the street with two men capturing her performance with cameras in their hands.

The video has been received more than 10.8 million views and about 4.9 lakh likes on Twitter. It has been retweeted by about 51,000 users so far.

“I think it’s that one day a year where the sun sets and lines up perfectly down the Manhattan streets,” a user commented.

“That wasn’t just any sunset. A couple of times a year we have Manhattanhenge, which is where the sun sets right along the street grid in Manhattan. It’s a big photo op for us.”

While a third user replied with the beautiful shot of the sunset in the comment section and said, “This is what they’re seeing.”