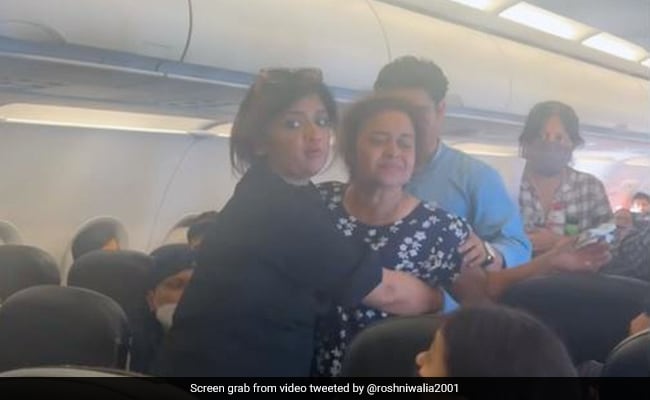 A video being shared widely on social media claims the air-conditioning on board a Go First flight stopped working mid-air, inconveniencing passengers, some of whom fainted.

In the video tweeted by Roshni Walia, whose Instagram profile identifies her as an actor, passengers are seen using the safety instruction card as a handheld fan.

A woman is seen crying as the stifling heat builds up inside the aircraft in a peak summer month.

“G8 2316 was one of the worst experiences. With AC not working and a full flight, suffocation-struck passengers had no way out, sweating profusely paranoid passengers were on the verge of collapsing. 3 people fainted, a chemo patient couldn’t even breathe,” Ms Walia tweeted.

@GoFirstairways G8 2316 was one of the worst experiences!With Ac’s not working & a full flight,suffocation struck passengers had no way out,sweating profusely paranoid passengers were on the verge of collapsing.3 ppl fainted,a chemo patient couldn’t even breathe.#complaintpic.twitter.com/mqjFiiQHKF

Go First replied to her tweet, asking her to share her travel details so that the airline can take a look into the matter. Ms Walia tweeted the video on June 14.

“Everybody is feeling so hot…flight took off 5:30, it’s 6:20 now, yet AC is not working. A cancer patient is feeling claustrophobic. The flight should never have taken off if the AC wasn’t working. We paid Rs 12,000 for one-way ticket. For what? Please do something, take action Go First,” a passenger says in the video.

Some Twitter users tagged the civil aviation regulator DGCA to investigate the matter.

Go First is the aviation foray of Wadia Group, one of the oldest conglomerates in India with presence in diversified industries. The airline calls itself a low-cost carrier that aims to make air travel affordable and accessible to the masses.