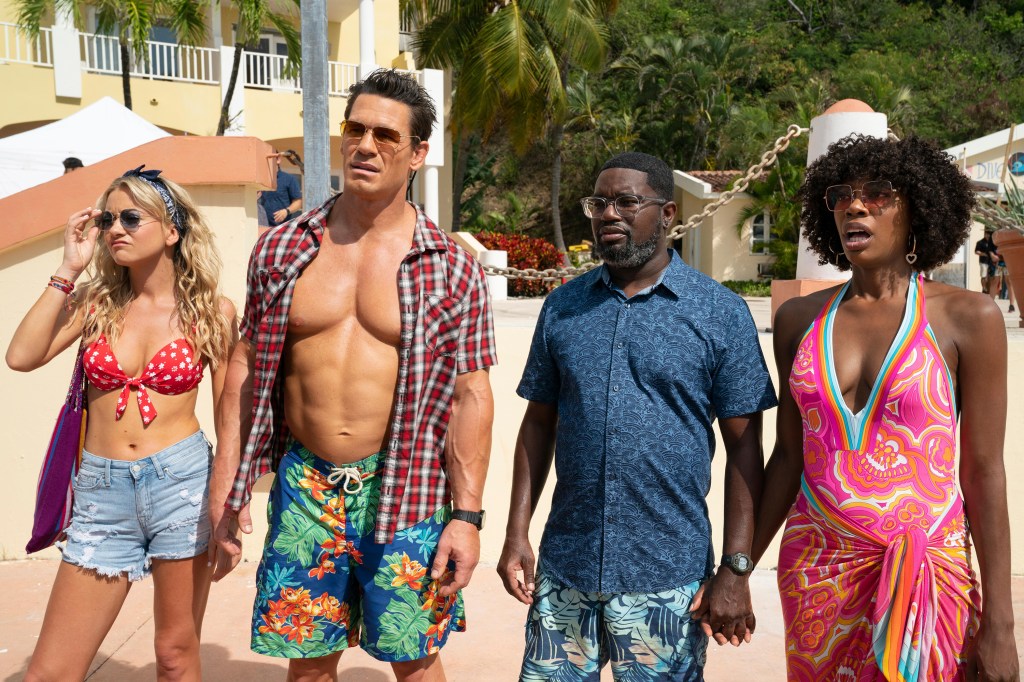 Wild-and-crazy couple corrupts boring, comfortable couple. You know it, you’ve seen it. From “Who’s Afraid of Virginia Woolf?” to “Meet the Fockers” (my apologies to the late Edward Albee for that rude comparison), it’s a tale that’s been told a lot.

The latest example is “Vacation Friends,” a meh movie made better by its phenomenal casting.

Lil Rel Howery and Yvonne Orji play Marcus and Emily, the strait-laced pair, who are on vacation at a luxury resort in Mexico. Marcus is about to pop the question in their suite, when he opens the door to find the room drenched in water from the overflowing hot tub of their upstairs neighbors.

To make amends, Ron (John Cena) and Kyla (Meredith Hagner), the loony lovebirds, invite them over for cocktails. Then things get weird.

While sipping a margarita, Marcus asks, “Why does the salt not taste salty?”

Early on, jokes like that are a hoot, but as the film continues, every gag stays on same level and thus becomes less and less satisfying. Not even a breaded cheese enthusiast such as myself wants 300 mozzarella sticks.

Seven months after that raucous night — and with only fuzzy memories of what actually happened — Marcus and Emily are shocked when their new friends arrive uninvited at their wedding. And, oh dear, Kyla looks about seven months pregnant. Who’s the daddy?

Playing the mom-to-be, Hagner is an actress to watch. She is hilarious as Portia on “Search Party” — which you need to binge if you haven’t — and she brings that same airhead sense of humor that feels totally improvised and completely her own. I never thought I’d want to see her married to John Cena — who, let’s be real, plays John Cena — but they make a sparky match.

Howery, who got Glenn Close to dance “Da Butt” at the Oscars, is deservedly everywhere these days. He’s a comic actor who you would have to be a jerk not to love. And it’s always nice to see Orji, who played Issa Rae’s business-brained friend on “Insecure,” get to dig into her stand-up comedy roots. More of that, please.

The talented quartet saves the movie, but making it great would take a rewrite.