This is what Jets fans are really booing about 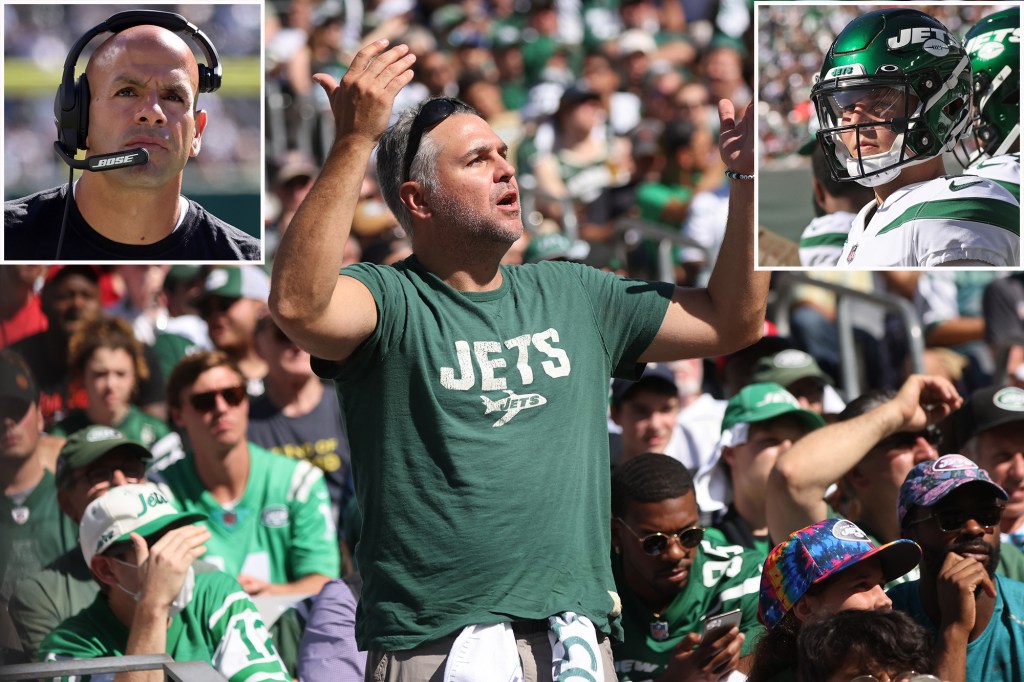 
The Jets fell to 0-2 for the third straight year with a 25-6 loss to the Patriots on Sunday at MetLife Stadium. Here are some thoughts and observations from the game:

1. The boo birds were out in the second half as the Jets flopped in their home opener. Here’s the thing that strikes me, though: fans are not really booing Zach Wilson or Robert Saleh or the current cast of characters. They’re booing the last 11 years. They’re booing the fact that they are seeing another inferior product on the field. Smart fans know that this is going to require patience. The Jets are not turning this around overnight. But they want to see some competence. The Jets, particularly Wilson, did not look all that competent in the first half of Sunday’s game.

It does not take much to start feeling, “Here we go again,” for Jets fans. When Wilson throws bad picks, it brings to mind Mark Sanchez, Geno Smith and Sam Darnold. When Bill Belichick beats up on the Jets, it brings to mind other losses from the last 20 years, particularly the last 10 when the gap between the two teams has been so wide. Same Old Jets is an expression that people inside the organization hate. But it exists and it is a real feeling for Jets fans, who have suffered through so many seasons of bad football. This is clearly going to be another one. But the Jets need to show their fans some competence. They need to play close football games. They need to lose because of a play here or there in the fourth quarter, not three interceptions in the first half.

I really don’t think Jets fans are asking for much from the 2021 Jets. They just don’t want to be reminded of the 2020 Jets and 2018 Jets and 1996 Jets and so many other bad Jets teams from the past when they watch them.

2. People had fun with the “seeing ghosts” storyline on Sunday (guilty). But here is the reality: this game looked nothing like the game in 2019. That 2019 Patriots defense was No. 1 in the NFL. This year’s Patriots are not as good. That night Belichick brought out a lot of tricks against Darnold. He used a lot of “zero” blitzes early, bringing the house. Then he started dropping into coverage later and Darnold was still expecting blitzers, the “ghosts” he was referring to.

On Sunday, Belichick played a pretty straight-up defense. Sure, he mixed in some coverages and blitzed sometimes. But this was nothing that should have baffled Wilson. It was pretty standard NFL defense. I don’t think this was a case of Belichick rattling Wilson. The rookie quarterback just made some bad decisions and some bad throws.

That may be more troubling than Darnold’s struggles in 2019 when it was clear that Belichick outcoached Adam Gase and flummoxed Darnold. In this one, Wilson can’t blame anyone but himself.

3. The Jets have said they are committed to a running back by committee, but you have to wonder if rookie Michael Carter showed he deserves a bigger role on Sunday. Carter averaged 5.4 yards per carry, running it 11 times for 59 yards. While Carter led the Jets in rushing yards, Ty Johnson had one more carry than Carter. Johnson started this week after Tevin Coleman started in Week 1. Coleman only had five carries for 24 yards.

I would play Carter more for two reasons. First, I think he is more explosive than Johnson or Coleman. The Jets need explosive players on the field. Second, Carter is part of the future here. I’m not sure Johnson is and I’m sure Coleman is not. A big part of this Jets season is about developing players for the future. That has been well established and GM Joe Douglas admitted as much before the season. Carter is close to the top of that list. Give him a heavier load and see how he handles it. If he falters, you can always dial it back. But I liked what I saw from Carter on Sunday and would like to see more.

4. The Jets cornerbacks deserve some kudos. There was a lot of handwringing over the Jets going with so much youth at the position, but through two games they have been fine. They have not been tested by an elite quarterback yet, so there could be long days ahead. But against Darnold and Mac Jones, the cornerbacks did their jobs. Saleh and defensive coordinator Jeff Ulbrich have helped with plenty of zone coverage that leads to short throws by the opposing quarterbacks. Whatever the reasons are behind it, you have not heard much about Bryce Hall, Brandin Echols, Javelin Guidry and Michael Carter II in the first two weeks and that is a good thing.

The Jets only punted once on Sunday despite not scoring a touchdown. I went to Pro Football Reference to see how often that has happened. The Jets are the 10th team to do it since 2000. Oddly enough, the last time it happened was against the Jets last October. The Bills did not punt or score a touchdown and actually beat the Jets. They had six field goals in an 18-10 Jets loss.

There were not too many surprises this week. Tevin Coleman only played seven snaps after starting in Week 1. Michael Carter and Ty Johnson each had 33 snaps. I’m a little surprised that Coleman did not have a bigger role but it is hard to argue with the production from Carter and Johnson.

C.J. Mosley looked like he was all over the field. Mosley had 10 tackles and one pass defensed in the game. Mosley looked good in training camp and that was on display again on Sunday. He looks quick and always has a nose for the ball.