This is the ultimate downside of Daniel Jones 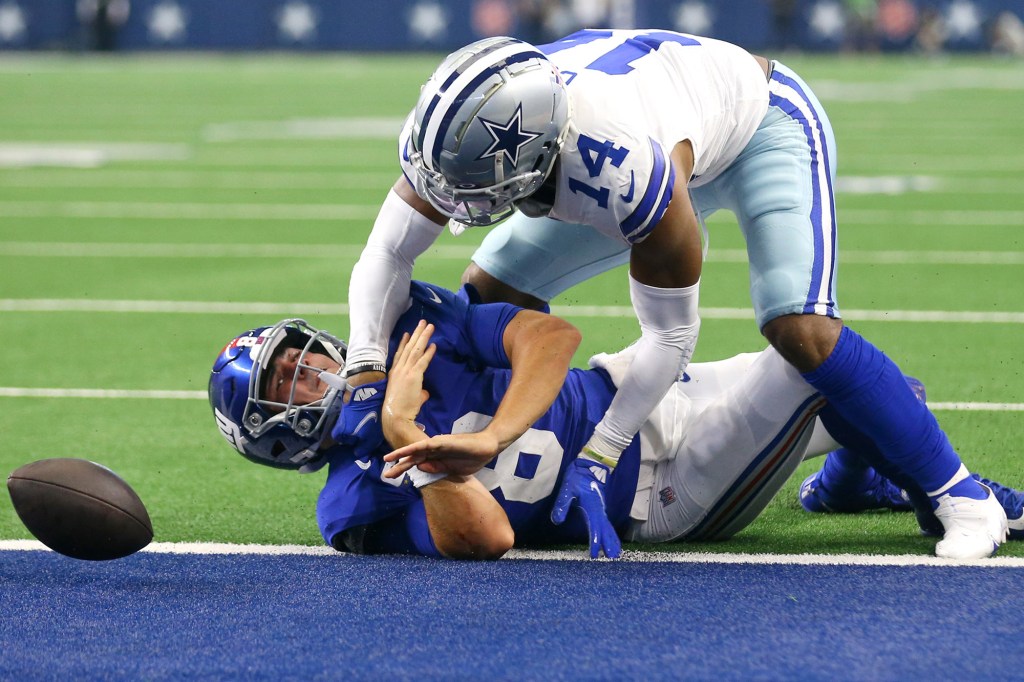 
This is what happens.

This is what happens when a quarterback, no matter how fast, how big and how strong, uses his legs as a weapon on offense.

Daniel Jones is fast. He is big and strong and when he runs, he brings positive vibes and yards to the Giants’ attack.

When he runs, he also gets hurt and, as he and his team are learning the hard way, the reward and the risk are inextricably intertwined.

Availability is everything, especially for a quarterback, and once again, Jones’ availability is in question as the Giants head into another work week. This is not about assigning blame or questioning Jones’ toughness. He is tough. This has been established. He is prone to getting hurt when he gets his 6-foot-5, 228-pound body moving in one direction and then confronts resistance from opposing players – or the hard turf.

That Jones is in the concussion protocol is another blow to a team that is piñata-like in its vulnerability, a team that might as well walk around with Kick Me signs taped to the backs of their jerseys. Jones, running back Saquon Barkley (ankle) and receiver Kenny Golladay (knee) all failed to make it out of the first half of what devolved into a 44-20 loss to the Cowboys, an almost incomprehensible 1-2-3 staccato of gut punches that sent the Giants to the canvas at AT&T Stadium. The Giants have fallen, and how in the world can they possibly get up?

Jones will spend the week healing and getting tested, and it is safe to assume he will miss Sunday’s game against the Rams at MetLife Stadium. He was out on his feet, his legs rubbery, after a designed run – actually a race to the left corner of the goal line – went awry as Jones failed to beat defenders Jabril Cox and Chauncey Golston around the edge. Jones lowered his body to try to muscle in, and Cox’ helmet collided with Jones’ helmet. Jones’ head slammed to the turf in whiplash fashion. In the ring, he would not have been saved by the bell.

If he misses time, this will be the third consecutive season Jones fails to make a start because of injury. He missed two games as a rookie with a high ankle sprain, paving the way for Eli Manning to make his final two starts of his NFL career. He missed two games in 2020, first with a strained hamstring and then with a sprained ankle. And now this.

Again, this is not a shot at Jones. It is the reality of Jones. Manning did not run and never missed a game. Not one, in 16 seasons. He played through some serious stuff, but when the offense took the field, he was out there. Every one of Jones’ injuries are the result of his escaping the pocket and taking off. He has slowly and painfully learned lessons, as far as not taking on defenders, opting for safer options: sliding rather than getting hit, running out of bounds instead of fighting for more.

There was no way for Jones to avoid the contact that knocked him out against the Cowboys. He was not trying to be a hero. He made a football play and did not make it to another down.

Jones in the first four games of the season showed plenty. He was named NFC Offensive Player of the Week for his performance in New Orleans, the lone Giants’ victory in five games. He was off to a rough start against the Cowboys and was not around at the finish. The Giants hope his symptoms are mild and he makes a quick recovery. He will assuredly miss practice time this week. He most likely will miss more than that. The beat goes on for the Giants.

1. Yup, Kadarius Toney made a mistake. He lost his cool and threw a punch midway through the fourth quarter. He was ejected, rightfully so. Coach Joe Judge was incensed, rightfully so. This is not good. But it is not an indictment on the rookie that some portray it to be. He took to Twitter early Monday morning to clear the air:  “Wanna take the time out to apologize to the entire organization, Owners, My Teammates and the entire #BigBlue …your emotions just can get the best of you sometimes…..No Excuses just actions. #ThankYall.’’

The immediate outcry in some circles – that the punch was analogous to Toney being a bad seed and that a suspension is warranted – was over the top. Toney will be fined by the NFL, not suspended. Judge will use this as a teaching tool and is not going to take his most dynamic player off the field for a momentary lapse in judgment. Did you see the way Toney competed in this game? The way he fought for every yard? The way he, at times, refused to be tackled? The way he muscled for every inch? The talent is there.  The passion is there. The will is there. The composure is not there. The Giants will work on this with Toney. It is early, and this is a first impression: The Giants need more players like Kadarius Toney on their roster.

2. It is somewhat remarkable there were no center-quarterback exchange issues when Jones went out and Mike Glennon came in as the replacement at quarterback. Just as Glennon noticed Jones looked “a little woozy getting up,’’ Glennon said, “I just ran and got my helmet. I went out and got some snaps with Billy [Price] because I don’t have a lot of snaps with him.’’ Indeed. Price was traded from the Bengals to the Giants on Aug. 30 and Price needed loads of catch-up time with Jones, leaving little for Glennon.

3. The Cowboys did not only defeat the Giants. They also manhandled them. And then gloated about it. Cowboys linebacker Leighton Vander Esch was asked the standard question afterward: was this game especially physical, given these are NFC East rivals and things got chippy near the end? The response from Vander Esch was anything but respectful:

“I thought we controlled the tempo,’’ he said. “My body feels good right now, so I don’t feel like it was an extremely physical game. I think we brought it to them every single snap the way we could, and I think we outhit them tonight. So, you can say it’s a physical game and all that, but there’s going to be games that are more physical than others. I didn’t come out of this game feeling like oh my gosh I’m freaking battered, or I got a bunch of bumps and bruises.”

4. It has been nearly four years since any team scored more than the 44 points against the Giants. The last time an opponent scored more was Nov. 5, 2017, when the Rams went into MetLife Stadium and rolled to a 51-17 victory. The 44 points allowed by the Giants was the most in a road game since a 49-17 loss in Minnesota in 2015.

6. The left guard spot was basically a shared position. Matt Skura started and played 29 of the 68 offensive snaps. Wes Martin, recently signed off Washington’s practice squad, was rotated in and actually played more snaps (39) than Skura.

7. This is something: Toney had 10 receptions for 189 yards – the yardage is the most ever for a Giants rookie. Toney also took a direct snap and gained seven yards on a designed run and, threw one pass that was incomplete. All this production was stuffed into only 37 snaps – 54 percent of the offensive snaps for the Giants.

8. The Giants put their best run-stoppers on the field in an attempt to combat the rushing prowess of Ezekiel Elliott and Tony Pollard. This is why inside linebacker Reggie Ragland got his heaviest workload thus far, with 77 percent of the defensive snaps. It did not pay off. Elliott ran for 110 yards and Pollard ran for 75 yards. The Cowboys rushed for 201 yards total.