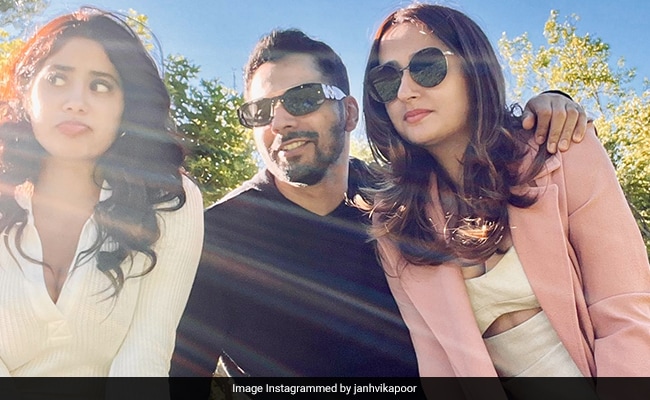 In Janhvi Kapoor’s latest Instagram entry, she is the “third wheel” not just to one couple but two of them. Janhvi Kapoor was seen third wheeling with Varun Dhawan and his wife and designer Natasha Dalal. She also posted a picture with filmmakers Nitesh and Ashwiny Tiwari. Janhvi’s expression in that shot is just too good to miss. The album also has a couple of solo shots of Janhvi Kapoor. “Your #1 third wheel,” Janhvi Kapoor captioned the post. The pictures happen to be from the sets of Bawaal, in which Janhvi and Varun Dhawan will co-star and the film will be directed by Nitesh Tiwari.

Check out the post shared by Janhvi Kapoor here:

On Tuesday, Janhvi Kapoor posted a few pictures with co-star Varun Dhawan and she wrote: “Having a Bawaal time in Amsterdam. Amsterdam sched wrap, Poland are you ready for us?”

Varun Dhawan and Natasha Dalal, who had been dating for several years, went to school together. The couple got married in an intimate ceremony in January, last year.

Varun Dhawan, star of films like October, Humpty Sharma Ki Dulhania, ABCD 2, Badlapur and Dilwale made his Bollywood debut with the 2012 film Student Of The Year. He also featured in the remake of Coolie No 1 with Sara Ali Khan. He was last seen in JugJugg Jeeyo. He will next be seen in Bhedia with Kriti Sanon. Other than that, his line-up of films also includes Bawaal with Janhvi Kapoor.