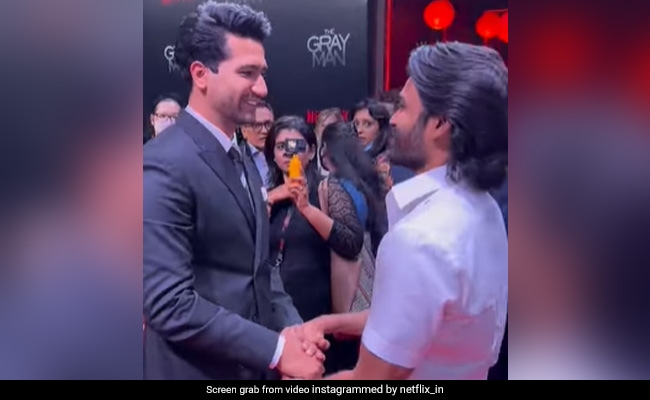 The Gray Man premiere, which took place in Mumbai on Wednesday, may have brought the director duo Russo Brothers to India, but Dhanush and Vicky Kaushal’s camaraderie stole the show. Vicky, dressed in a black suit, hugged Dhanush, who arrived in a white kurta and veshti. They were seen having a conversation and then later posed for the cameras too. Netflix India, on which The Gray Man is releasing, shared a video of Vicky and Dhanush’s warm hug and captioned it: “A Vicky and Avik walked into a hug and made us the happiest.” Dhanush is playing Avik San, an assassin, in The Gray Man, the film that marks his Hollywood debut.

Take a look at the video below:

Directed by the Russo Brothers – Joe and Anthony Russo, of the Avengers: Endgame fame, the film also has Ryan Gosling, Ana de Armas, Chris Evans and Rege-Jean Page starring in it.

The premiere of The Gray Man also took place in London earlier where Dhanush was accompanied by his sons – Yatra and Linga. He shared pictures with them, posing on the carpet. All three wore black tuxedos for the event. Dhanush captioned the images: “When you realise they have completely stolen the show from you. At The Gray Man premiere with Yathra and Linga.”

Talking about the Russo brothers coming to India, last week, Dhanush shared a picture with them and wrote, “The Russo Brothers are coming to India soon. Super thrilled,” with the hashtag #TheGrayMan.