The Giants still have the same glaring problem 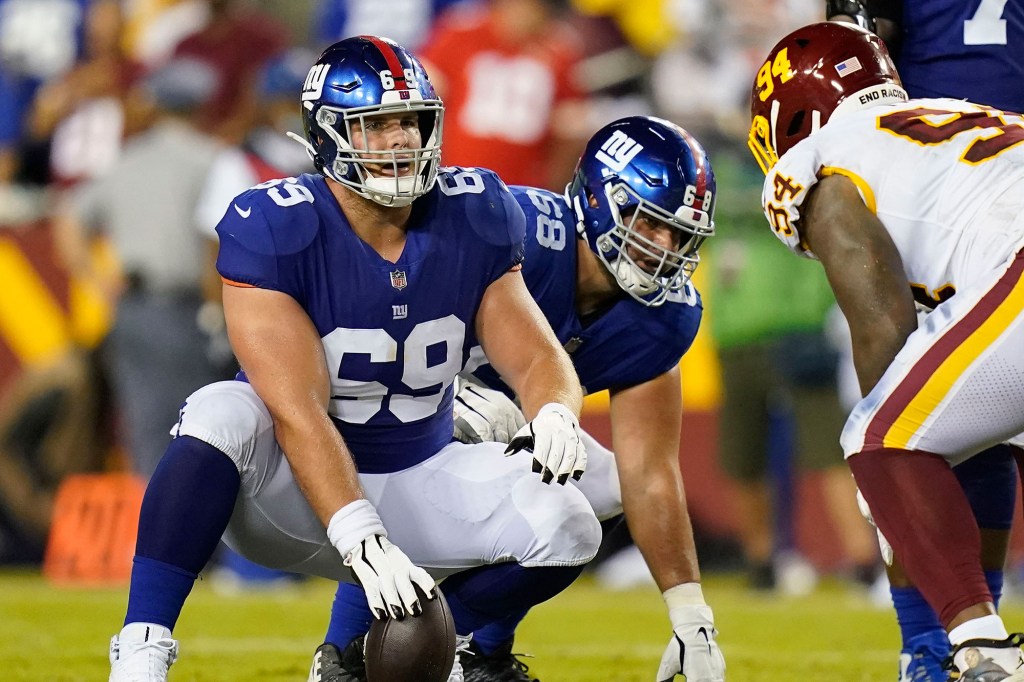 
One more failed attempt to hit the reset button and the Giants might have to try gently blowing air into a video game cartridge.

Anyone who ever owned a faulty Nintendo system can relate to the creative lengths sometimes required to fix a recurring glitch, but this is extreme even by those childhood standards. Because this is real life. And the Giants are facing a familiar crisis.

The Giants will start their 15th different offensive line combination over the last 51 games Sunday against the Falcons. Left guard Ben Bredeson will become the 17th different starter on the line (17!) during those three-plus seasons under general manager Dave Gettleman’s watch.

“O-linemen are very similar kind of guys: Easy-minded, relaxed personalities,” center Billy Price said. “Most guys dip [tobacco], we all like to drink beer and all of us have pretty good women in our lives.”

Of those five, four didn’t start a single game during the second half of last season, when Solder exercised his COVID-19 opt-out clause and Hernandez (Giants), Bredeson (Ravens) and Price (Bengals) were saddled to their teams’ respective benches. Three were not penciled in as starters for this team — or any team — just four weeks ago, when Solder was stuck behind Matt Peart.

The five-as-one mindset is why offensive linemen harp on the cohesion missing from the Giants. The line Sunday against the Falcons will be the third different starting combination in as many games.

“You get relationships based on being in the fire,” Price said. “It’s been quick, but we’re learning how one another plays: The calls, the mannerisms, how you feel in the fourth quarter.”

Gettleman defiantly backed a young offensive line with major question marks throughout the offseason. His plan was derailed by the losses of Shane Lemieux (injured reserve) and Nick Gates (season-ending broken leg), but the excuse only goes so far.

It doesn’t cover not bringing in backups capable of pushing the starters or for going all-in on Peart — after he played sparingly as a rookie — only to see him lose the job to Solder, who had to accept a $7 million pay cut and a position change just to avoid being cut in March. Now Peart is going to learn guard in practice.

“If you love the game, when some things come up like this, just go ahead and play,” Peart said, before explaining how he can win back coaches’ trust. “Refining my technique, becoming a better student of the game and the intangible things that we work at practice. I feel like I’ll be ready.”

It might be easier to swallow if this was the first time that the preseason plan needed to be totally blown up within the first half of the season. But a similar thing happened in 2018, when the Giants cut Week 1 starters Ereck Flowers and Patrick Omameh before Thanksgiving. This time, Bredeson and Price arrived via trades after training camp.

“I was actually pleased with the way they came through,” Judge said. “Billy and Ben have jumped in here in a short period of time and really made a lot of gains for us, jumping in and learning the vocabulary with one week of practice and another week of a couple walk-throughs.”

There’s no time to lament a missed Plan B now. The latest offensive line iteration will impact Saquon Barkley’s production as he returns from a torn ACL and Daniel Jones’ development. For now, it’s back to the basics, like shotgun-snapping the ball into Jones’ hands, which was a problem for Price three times last week.

“I’m just glad none of them were hot and went over his head,” Price quipped. “I’m a pro. I own those things.”

The Giants own the offensive-line reset button.