The dark world of pro-wrestling: Suicide, murder and chronic pain 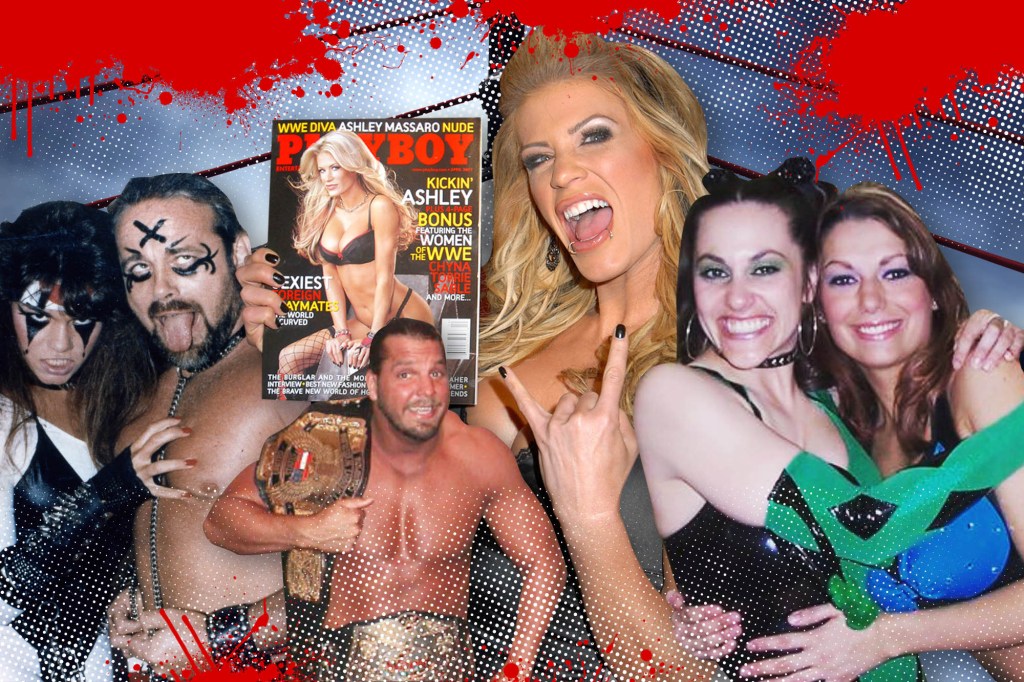 
The world’s most scripted sport is made up of outrageous plot lines, larger-than-life heroes, cartoon villains — and a real-life dark side.

Former professional wrestler Daffney Unger went on Instagram Live this week and appeared to click a pistol while crying. Following a subsequent frantic search to locate her, the 46-year-old was found dead on Thursday.

Unger, born Shannon Spruill, is the latest wrestling star to die a sudden and tragic death — and give horrified followers a peek into the dark world that now seems to be synonymous with the sport.

Georgia’s Gwinnett County Medical Examiner’s office told The Post Unger’s cause of death has yet to be released since it’s a pending case. But her unsettling Wednesday night video led grieving friends and fans online to share the National Suicide Prevention Lifeline phone number and encourage those battling mental health issues to reach out for help.

“I’m so very sorry to learn of Daffney’s passing,” wrestling legend Mick Foley — whose representative didn’t return The Post’s message seeking comment — tweeted on Thursday. “A terrible loss for her family, friends and wrestling. She was far ahead [of] her time in our business. #RIPDaffney”

He continued, “If you’re hurting and thinking of doing harm to yourself, please know that help is available,” before sharing the suicide prevention hotline number.

Foley also had expressed concern for Unger after the disturbing video went viral and attempted to help. “If anyone has a way of reaching Daffney Unger, or knows her address, please help out,” he tweeted. “She’s in a bad personal place and is threatening to harm herself. My phone call went straight to voicemail.”

In a clip of Unger’s Wednesday video, she mentions CTE — or chronic traumatic encephalopathy, a progressive brain condition that stems from repeated injuries to the brain, such as concussions — which can only be diagnosed after death.

“So I don’t want to do anything to hurt my brain,” she said. “I want it to be studied. I want the future generations to know: Don’t do stupid s–t like me.”

“Remember, my brain goes to Boston,” she added.

The disease has long affected boxers, but recent years have revealed stories about hockey and football players who suffered from it — one of whom was Aaron Hernandez, the late New England Patriots tight end convicted in 2015 for the 2013 murder of his friend Odin Lloyd, and who hanged himself in his prison cell in 2017 at age 27. Wrestler Chyna, the “Ninth Wonder of the World” who died in 2016, also donated her brain for CTE research.

It appears that Unger lived in a world of hurt — and sadly, she wasn’t the only wrestler to inhabit it.

French-Canadian professional wrestler Chris Benoit, otherwise known as the Canadian Crippler, shocked the wrestling world in June 2007 by killing his wife and son before taking his own life. At the time, observers noted a presence of steroids in the family’s Georgia home — and speculated a “roid rage” made him snap.

In reality, the 40-year-old Benoit was one of the first pro wrestlers to be diagnosed with CTE after death.

Benoit murdered his second wife, 43-year-old Nancy — who had previously filed for divorce and had applied for a restraining order against him in 2003 after he threatened her and broke furniture in their home — by strangling. Investigators found her in an upstairs room with hands and feet bound, and blood under her head.

The wrestler also smothered his 7-year-old son Daniel by asphyxia; investigators found the child dead in his bed. The two were reportedly killed hours apart. After, Benoit took his own life by using a cable from a weight machine in his gym to hang himself. There was no note, but bibles had been laid next to each body.

Christopher Nowinski — a former professional wrestler, friend of Benoit and author of a book about CTE published in 2006 — told the New York Times in 2007 that he believed repeated and untreated concussions from wrestling were to blame.

In the end, Benoit’s brain resembled that of an 85-year-old man with Alzheimer’s.

The murder-suicide changed the state of professional wrestling, according to Vice, which added that — though the WWE was in the process of making its appearance cleaner — direct blows to the head stopped happening after news of his autopsy.

“He was one of the only guys who would take a chair shot to the back of the head,” Nowinski told the Times, “which is stupid.”

Former WWE star Ashley Massaro, who reportedly died by suicide in 2019 at age 39 after a yearslong battle with depression, also sought to have her brain donated for CTE research, her lawyer announced at the time.

Massaro, a Long Island native whose three-year stint in the WWE began in 2005, took quite a beating during her years.

“She had swollen knuckles from being broken. Sometimes I would ask her questions, and she would use wrestling terms and say, ‘Girl, I’ve taken too many bumps. I can’t even remember what I had for breakfast,’ ” Massaro’s friend and fellow former wrestler Rochelle Loewen told The Post in 2019. “She was suffering from short-term memory loss from concussions.”

Massaro, also a one-time contestant on “Survivor,” had been public about her mental health struggles, and previously blamed wrestling-incurred injuries for them.

In 2016, Massaro — who also spent 42 days in rehab in 2010 for addiction — joined a class-action lawsuit of 60 wrestlers that alleged the WWE failed to protect its wrestlers from concussions and head trauma. In 2017, Massaro claimed in an affidavit that she suffered multiple concussions during her time wrestling and she never received warnings about the associated risks.

“Aside from my ongoing physical injuries that were sustained in the ring, and my former battle with addiction, to this day I suffer from depression, for which I take medication; migraine headaches; and severe short-term memory loss,” she charged.

The suit was dismissed in 2018 claiming an expiration of many statutes of limitation; an appeal was pending at the time of Massaro’s death. Also after her death, WWE issued a statement saying Massaro had apologized to the organization in 2018 for taking part in the suit — and in an email shared with The Post in 2019, Massaro claimed the lawyer repping the plaintiffs “poached” her and the battle “got out of control fast.”

In an eerie twist, Massaro starred in a music video about suicide prevention just months before she took her own life.

Pro wrestler Chris Kanyon, who died by suicide in 2010 in his Queens apartment at age 40, had previously attempted to take his own life in 2003 by taking a full bottle of sleeping pills when he learned he had bipolar disorder.

Despite the challenges with his mental illness, Kanyon — born Christopher Klucsarits — also lived at odds with being a professional wrestler and a gay man.

He wasn’t ashamed of his sexual orientation but still went out of his way to stay in the closet to keep his career safe, according to Bleacher Report. And due to it, he lived in emotional hell.

Still, in 2001, Kanyon decided to come out within wrestling, but not publicly — and even pitched himself to be a non-stereotypically gay character, which according to the posthumously published “Wrestling Reality: The Life and Mind of Chris Kanyon, Wrestling’s Gay Superstar,” didn’t receive support from WWE creative.

Instead, in 2003 — as part of a feud between the Undertaker and the Big Show — Kanyon would emerge from a box, dressed as Boy George, sing “Do You Really Want To Hurt Me?” and get beaten up by Undertaker. Undertaker, according to the account, gave Kanyon a serious blow to the head with a chair.

Online rumors after this appearance circulated, speculating he was gay, which left Kanyon no option but to come out and make his identity his full-time wrestling shtick, which again was turned down. Losing grip of his wrestling career, and appearing in non-prime shows, he made a suicide attempt that year.

Kanyon never came out publicly during his career, which lasted until the mid-2000s — but did shortly after.

If you are struggling with suicidal thoughts or are experiencing a mental health crisis, call the 24/7 National Suicide Prevention hotline at 1-800-273-8255 or go to SuicidePreventionLifeline.org.

Fordham prepares to take on its biggest foe in decades