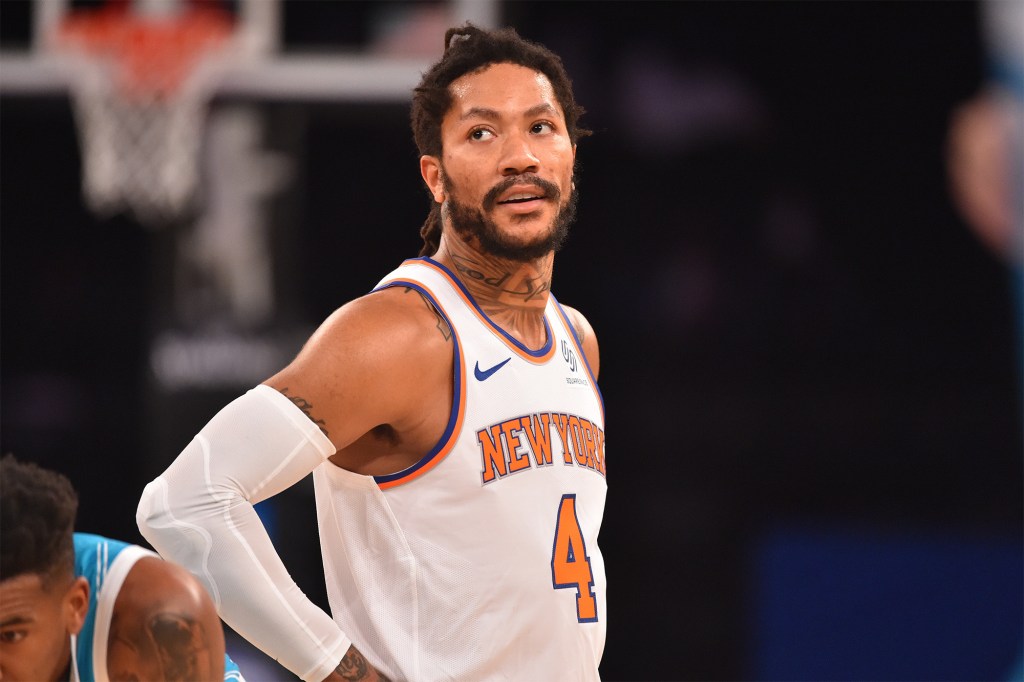 
If the Knicks don’t pull off a blockbuster trade this season, they will go as far as the knees of their 30-year-old-plus point guards take them.

Though Evan Fournier was their most expensive free-agent acquisition, team president Leon Rose’s decision to ink Kemba Walker and re-sign Derrick Rose will decide whether the Knicks progress off 2020-21’s rousing 41-31 campaign.

Point-guard play has been the Knicks’ death knell during their 48-year championship drought. The health and productivity of Walker and a resurgent Rose will determine everything.

During last season’s turnaround campaign that broke a seven-season playoff dry spell, durability was a critical high point. Ironically, the only time Rose missed was due to contracting COVID-19. Otherwise, he was fit and fantastic after the early-February trade.

However, the Knicks now boast two point guards with a lengthy history of knee issues as all eyes are on the duo when training camp opens Monday, with the first practice Tuesday in Tarrytown. (Fournier also was limited to 42 games last season.)

“Health, I think it’s a big question for every team, and it’s important [Walker] feels good,’’ coach Tom Thibodeau said Friday in his first remarks on the surprise signing. “[Kemba’s] been in. He’s doing a lot of work. And you got to trust him. He understands what he has to do to be ready for a season.’’

After Oklahoma City reached a buyout on the $74 million left on his contract early in free agency, the Knicks swooped in and signed Walker, a Bronx native, to a two-year, $18 million deal.

Walker played just 43 games for the Celtics due to an arthritic left knee. Brad Stevens, promoted to president of basketball operations, couldn’t have traded Walker to the Thunder fast enough.

It wasn’t the Knicks’ Plan A, but it’s Plan B. As in Plan Bronx.

“We have a great medical staff that’s working with Kemba, and we’re just looking forward to seeing him on the court,’’ Leon Rose said Friday, breaking a 14-month silence.

Defense is not Walker’s forte as an undersized guard, but in four All-Star seasons, the former UConn star turned into a spectacular scorer, penetrator, distributor and teammate.

As former starting point guard Elfrid Payton, now in Phoenix, fell off the grid, Julius Randle and Derrick Rose proved they couldn’t do it alone during a bitter 4-1 playoff smashing by Atlanta.

Like last season’s club, the Knicks should have backcourt depth to make up for the possibility of Walker missing significant time or if he chooses again not to play in back-to-backs.

It’s one reason the Knicks wanted Immanuel Quickley to play entirely at point guard during summer league. In addition, rookie PG Miles McBride has already shown in Las Vegas to be a Thibodeau-type defender.

Thibodeau said nothing’s been determined on the Walker back-to-back issue.

“It’s also, what does he think?’’ the reigning NBA Coach of the Year said. “This guy has managed his career a long time. So what’s the best for him? Was it better for him in the end or was it not? So you have to talk to him, you have to see how [his knee] feels. You have to talk to the medical people. I don’t want him to limit himself in terms of what he can do. We have to trust the player. We talk to Derrick about that — if he needs time off, he’ll get it.’’

Derrick Rose finally broke down late in the playoffs against Atlanta as his minutes rose to over 35 minutes a night. It was too much for Rose, who had been on a 25-mintue restriction in Detroit. The Knicks made a big commitment to him — a three-year, $43 million deal.

In displaying a newfound 3-point shot (38.8 percent) and looking like his old self with a dangerous mid-range and attacking game, Rose came off the bench and saved the season.

The Knicks won 69 percent of the games in which Rose played, against just 47 percent in games where he did not.

Thibodeau alluded to the possibility of playing both at the same time if both are rolling and needing more minutes. As for who starts, Thibodeau said, “Nothing is etched in stone. I have a pretty good idea of how I want to start it off but that doesn’t mean that it will end up there.

“That’s what I like about the depth of the team,’’ Thibodeau added.“The thing about Derrick — I feel like I probably can play the two of them together. I know I have to get them enough minutes. That Derrick can play on the ball, off the ball, in a lot of ways, so can Kemba.’’

Last training camp, the Knicks entered with Dennis Smith Jr. and Frank Ntilikina vying for a point-guard starting job that wound up Payton’s. Smith, whom the Knicks traded to Detroit for Rose, is on a non-guaranteed contract with Portland. Ntilikina was a last-second signing with Dallas.

Now it’s a Walker-Rose tandem for a Knicks club vying for home-court advantage in the first round.