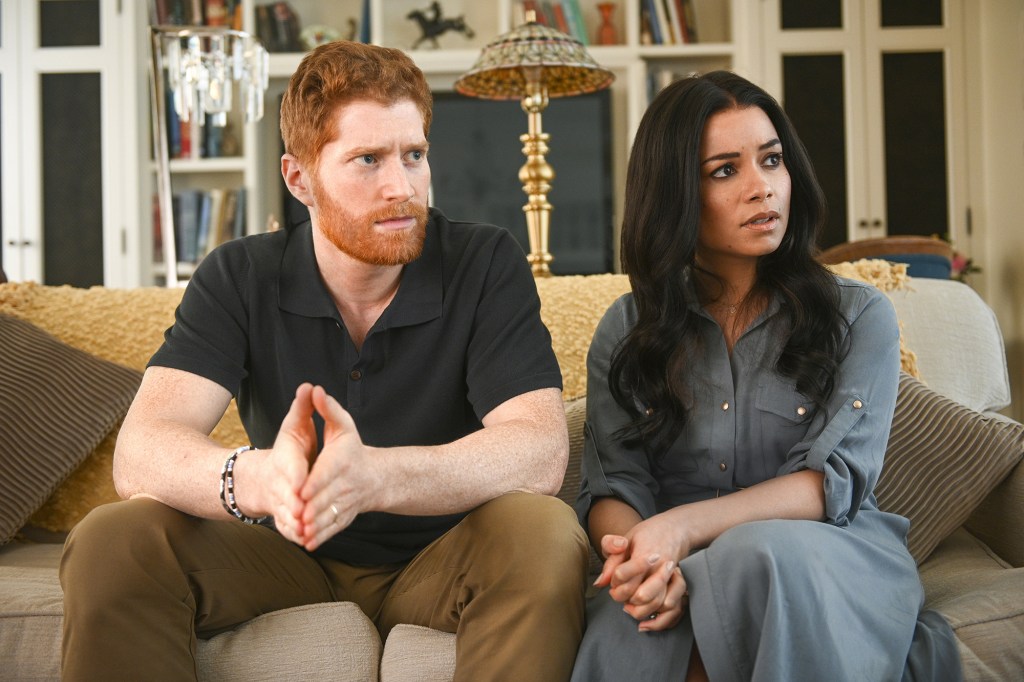 “It’s a new experience for me,” said Morton. “I’ve played real people in the past, historical figures who are no longer living, so not only do you feel a responsibility to respect this person … but it’s also such a sensitive subject — especially in this third [Lifetime] movie [about Harry and Meghan] that’s covering very personal and traumatic events they’ve spoken about very publicly.”

Jordan Dean plays Harry in “Escaping the Palace,” airing Monday (Sept. 6) at 8 p.m. It dramatizes Harry and Meghan’s break from the Royal Family, their move to California with baby Archie and all the Sturm und Drang in-between. It ends with a scripted scene showing Harry and Meghan in their blockbuster interview with (an unseen) Oprah Winfrey, which aired in March on CBS.

“I think if you’re approaching any role as an actor you can’t judge your character,” said Morton. “You’re only trying to portray them from their point of view, their truth, and I knew I could approach this role with respect.

“[Meghan’s] interview with Oprah really resonated for me as a person of color and a woman of color,” she said. “I haven’t experienced being a princess but oftentimes I can feel like an outsider and I feel isolated … and I used some of my shared experiences.”

Morton’s acting resume includes a co-starring role opposite Octavia Spencer in “Self Made: Inspired by the Life of Madam CJ Walker,” Alice Bates in “Manifest” and Cheryl Overstreet in “She’s Gotta Have It,” Spike Lee’s adaptation of his 1986 big-screen movie which ran for two seasons on Netflix.

She said not too many people ever commented to her that she resembled Markle.

“Friends said ‘You kind of look like Meghan’ and a week later I had to say that I got the audition for the movie,” she said. “The more I started to play with the makeup and freckles and hairstyles and wardrobe … I do think there is some resemblance, especially when I’m standing next to Jordan dressed as Harry.”

Morton said she wasn’t a regular viewer of “Suits,” the USA legal drama in which Markle played Rachel Zane, who worked her way through law school, passed the bar and married fellow attorney Mike Ross (Patrick J. Adams). “I have a very vivid memory of channel-surfing — I didn’t know the show — and I clicked on ‘Suits’ and I had to go back,” Morton said. “I was thinking, ‘Who is this beautiful woman playing this strong character?’ While I was preparing for the movie I watched a lot of scenes from the show and also the blooper reels. Seeing Meghan laughing and being silly and cracking jokes was nice. There’s certainly no footage of that now.”

And, she said, shooting “Harry & Meghan: Escaping the Palace,” was a learning process, both for her and for her portrayal of Markle.

“I kind of had to discover their humanity in the process of filming the movie and playing this role,” she said. “When I first accepted the role, I definitely thought of the larger picture, of the Prince and Duchess taking a child and leaving their palace. I was quarantined for two weeks before filming [due to COVID] and I immersed myself in all-things Royal. By then I had a sense of their family drama, of doing the best for themselves and their child.

“That’s what motivates them.”