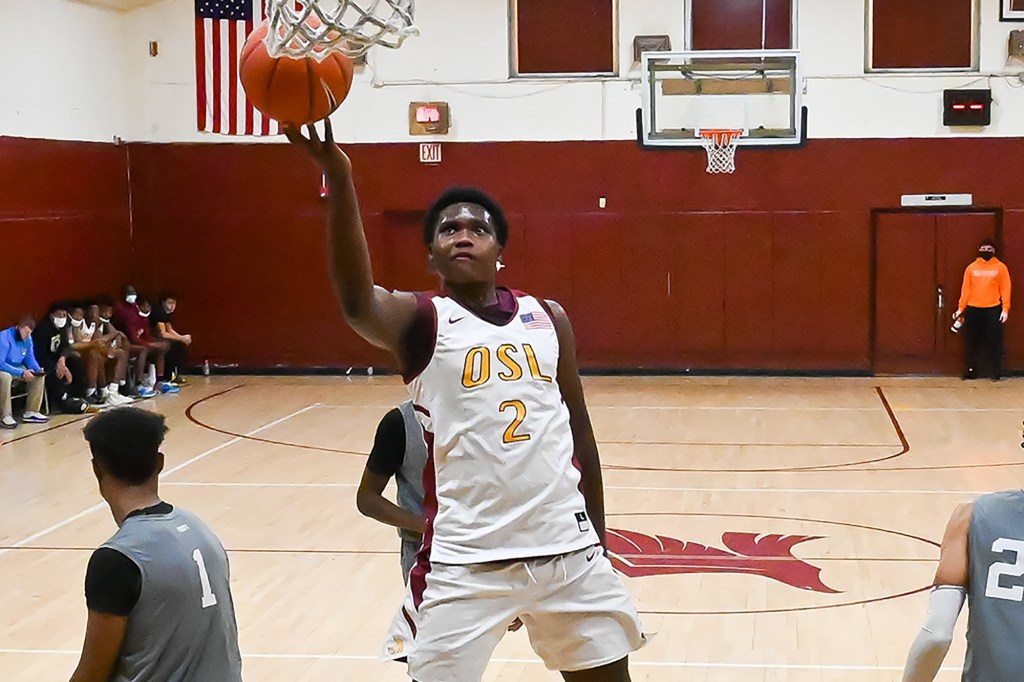 
The present appears bright for St. John’s — and its future may be too.

Just over five weeks after landing AJ Storr, his highest-rated recruit since taking over in Queens three years ago, head coach Mike Anderson picked up a verbal commitment from another highly regarded prospect.

“I feel like St. John’s is the best decision for me,” Sanders told The Post in a phone interview. “To be honest, I love the coaching staff. We talked every day, every other day. I felt like coming to St. John’s and staying in my city would be the best thing for me.”

A three-star, top-150 recruit, Sanders joins four-star guard Storr and point guard Kolby King in the Red Storm’s 2022 recruiting class. St. John’s is projected to be one of the top teams in the Big East and is expected to reach the NCAA Tournament.

Sanders, a skilled 6-foot-3 shooting guard, has been a priority recruit for Anderson and his staff for quite some time. He made an official visit to St. John’s over the weekend, on the heels of his visit to Seton Hall. Sanders said that as recently as June, he was leaning toward joining the Pirates, but changed his mind. According to his mother, Lisa, it was the toughest decision of his life.

The Red Storm coaching staff made it clear how much they wanted him by how frequently they reached out. Sanders said he felt the close bond Anderson has created within his program during his official visit, when he spent time with the team, visited the coach’s home and went out to eat with everyone. He said he even felt close with the players he didn’t know.

“Everything was family with them,” Sanders said.

As the two got to know each other, Anderson asked Sanders his biggest goal in life. It wasn’t the NBA or being an All-American. He wanted to get his family out of Far Rockaway.

“He always told me, ‘You come here, I promise you, you’re going to get them out,’ ” Sanders said. “I kept replaying that in my head.”

The addition of Sanders is a continuation of the ability of Anderson and his staff to land local recruits, following Alexander, Addae-Wusu, current freshmen Rafael Pinzon and Drissa Traore, and most notably Julian Champagnie, the Big East’s leading scorer last season. Assistant coach Van Macon was the lead recruiter for Sanders, as he has been for most of the local prospects St. John’s has landed.

“There’s nothing like playing for the [city] you live in,” Sanders said. That’s one of the reasons I went to St. John’s. I’m letting you know right now: I’m ready to put on for my city.”

Like Alexander, Sanders opted for St. John’s over Seton Hall, and the presence of Alexander and Addae-Wusu factored into his decision, he said. They didn’t pressure him into joining them, but instead explained to Sanders the reasons they chose St. John’s and why they like it there.

Unlike Alexander, the co-Big East Defensive player of the Year last season, Sanders is known more for his offense. He is a quality shooter and playmaker, capable of creating his own shot and making plays for others. Last season for Our Saviour Lutheran, he averaged 19 points, seven assists, four rebounds and two steals while shooting 39 percent from 3-point range and 44 percent from the field.

“He’s a good player,” a Division I coach familiar with Sanders said. “Better passer and playmaker than he is given credit for. Can be a good secondary ball-handler and decision-maker.”

Yankees’ ugly season still has chance to be beautiful