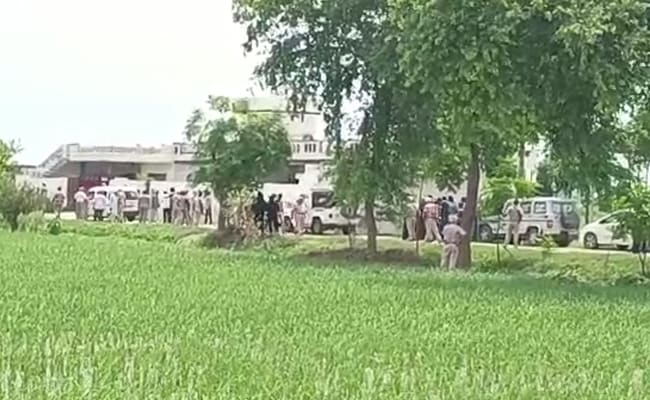 Three ambulances have reached the village near Amritsar where a shootout between the police and two suspected killers of singer Sidhu Moose Wala is on. The area has been cordoned off and people told to stay indoors, sources said.

Mannu Kussa is alleged to have fired the first shots at Moose Wala from an AK-47 rifle. He and Jagroop Roopa were among three shooters on the run. While these two are now engaged in a shootout, the third, Deepak Mundi, has not been traced yet. The rest — there were at least eight shooters — have been arrested.

Shubhdeep Singh Sidhu, alias Sidhu Moose Wala, 28, who was a Congress leader besides being a singer-songwriter and rapper, was shot dead near his village Moosa in Punjab’s Mansa district on May 29.

Police from Punjab, Delhi and Mumbai have been on the case. The murder was directed allegedly by Canada-based Satinderjit Singh, alias Goldy Brar, in coordination with gangster Lawrence Bishnoi, who was already in Delhi’s Tihar Jail.

Goldy Brar is alleged to have claimed responsibility for the murder through Facebook posts. The posts  said it was revenge for the murder of an Akali leader Vicky Middukhera last year.

Interpol has since issued a Red Corner Notice to trace Goldy Brar in connection with two other cases registered at Faridkot in Punjab.

Punjab’s Bhagwant Mann-led AAP government has been facing questions, too, as the murder took place just a day after Sidhu Moose Wala’s security was cut down to two cops as part of a larger drive against “VIP culture”. But the singer hadn’t taken the two cops along, nor was he using his bulletproof car, when he was attacked.