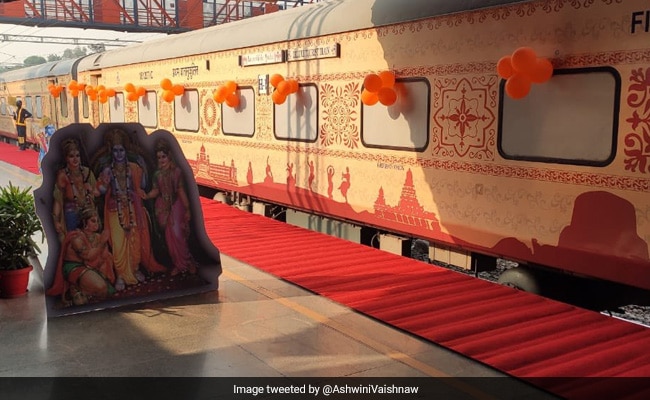 The train operating on the Ramayana Circuit will also cover religious destination of Janakpur (Nepal).

The inaugural Bharat Gaurav train, connecting destinations associated with Ramayana Circuit in India and Nepal, arrived in Nepal’s Janakpur on Thursday with 500 tourists from India.

The 14-coach train, which arrived at Janakpur Dham station, was flagged off from Delhi’s Safdarjung railway station on Tuesday.

The Indian government had launched this initiative to join all the major places related to Lord Ram and Sita and develop the Ramayana Circuit.

The train operating on the Ramayana Circuit will also cover the religious destination of Janakpur (Nepal) for the first time in addition to other popular destinations such as Ayodhya, Nandigram, Sitamarhui, Varanasi, Prayagraj, Chitrakoot, Panchvati (Nasik), Hampi, Rameshwaram and Bhadrachalam. O On Thursday, Chief Minister of Madhesh Pradesh Lalbabu Raut, Minister of Industry, Tourism and Forest of Madhesh Pradesh Shatrughan Mahato, Mayor of Janakpurdham Manoj Kumar Shah, General Manager of Nepal Railways Niranjan Jha, Counsellor of Embassy of India in Kathmandu Prasanna Srivastava welcomed the passengers on board the train.

The tourists will visit Janaki temple for darshan, witness a cultural programme in the premises of Janaki Temple and participate in Ganga Aarti, according to a press release from the Indian Embassy.

On June 24, they will visit Janakpurdham before proceeding to Sitmarhi by road for the onward journey on the Ramayana Circuit route by the Bharat Gaurav Train.

The train is expected to boost tourism in India and Nepal further, the Indian Embassy said