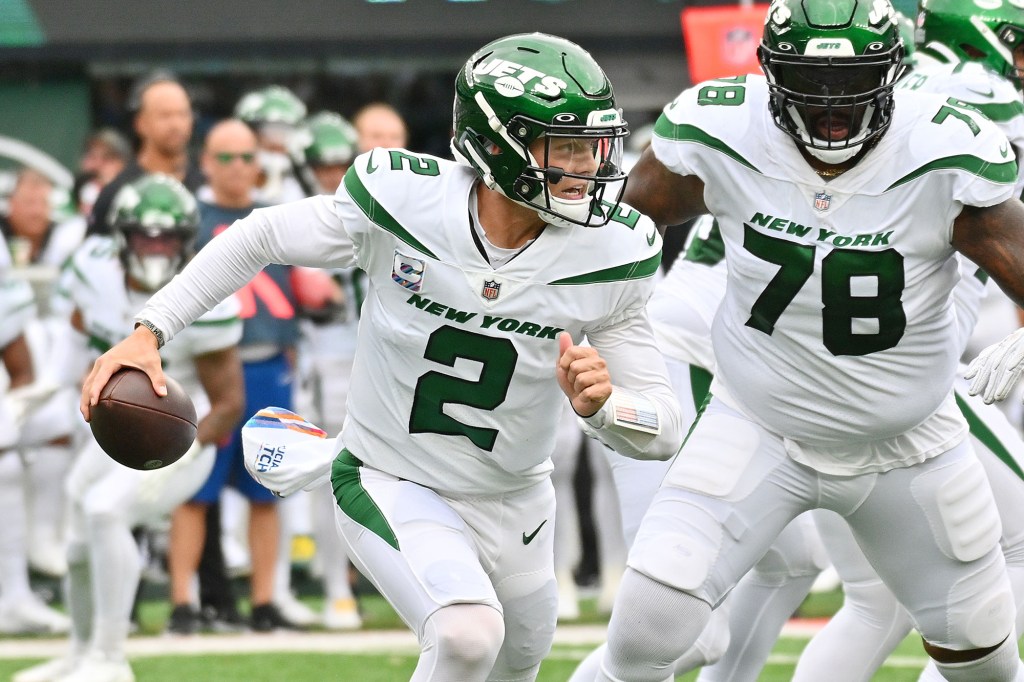 For the Jets, a game with the Patriots usually equates to a date on death row: The end result inevitable.

The Jets have lost to the Patriots the last 11 times they’ve played them. They’ve lost 14 of the last 15. Seventeen of the last 19.

The last Jets win in New England came in January of 2011 when they stunned the Patriots, 28-21, at Gillette Stadium in the AFC divisional playoff round.

You get the picture: It’s been grim to be green in this rivalry that’s really a reach to be termed a “rivalry’’ based on the one-sided nature of it for the past decade.

The Jets, 0-1 against the Patriots already this season, having lost 26-6 in Week 2, play their nemeses Sunday at Gillette Stadium in what has a chance to be a catalyst to the rest of the season for them.

The 1-4 Jets need a jump-start, and the Patriots are the perfect elixir.

Sunday is an opportunity for Jets coach Robert Saleh to show his coaching chops as he adjusts to the things Bill Belichick and his staff did to the Jets in the last meeting.

Saleh and his staff are coming off a game in which they were outcoached by Falcons head coach Arthur Smith and his coordinators, Dean Pees on defense and offensive coordinator Dave Ragone, who neutralized the Jets’ aggressive defensive front by having quarterback Matt Ryan release the ball quicker than he usually does.

Sunday is an opportunity for Zach Wilson to show he’s not the jumpy rookie quarterback he looked like last month when three of his first five passes ended up in the hands of Patriots defenders, including his first two throws.

Wilson finished with four interceptions in that loss, essentially handing the game to New England.

Take away the Wilson giveaways and the Jets otherwise played a decent game against that day.

The Jets defense held the Patriots to just 260 yards of total offense and just 3 of 12 on third-down conversions.

Offensively, the Jets had their best game of the season running the ball, amassing 152 yards on 31 carries in what looked as close to a blueprint as there is to what Jets offensive coordinator Mike LaFleur wants to do with his rotating-back running game. Michael Carter rushed for 59 yards on 11 carries, Ty Johnson gained 50 yards on 12 carries and Tevin Coleman added 24 yards on five carries.

Bottom line: This is a very winnable game for the Jets and it’s one that can become a catalyst to the growth of this young team.

It should not be forgotten that New England is also a young team trying to find its way while breaking in a rookie quarterback. The Patriots are coming off an overtime loss to Dallas in which they allowed 445 passing yards to Cowboys quarterback Dak Prescott, the most ever allowed by a Belichick defense.

Sure, the trends and the numbers tell you the Jets will lose this game because they always lose to the Patriots.

But here’s the thing: This young Jets roster doesn’t have the scar tissue former players had when they saw the New England uniforms across the line of scrimmage. These guys don’t care about 11 in a row, 14 of 15 and 17 of 19.

The players on this team are too young to remember or care about the Buttfumble, the ghosts Sam Darnold said he was seeing or any of the other humiliating moments this franchise has been subjected to by Belichick’s team.

When the Jets look at tape of the loss to the Patriots last month, they’ll see a team they could have defeated that day and one they surely can beat on Sunday.

Jones played a conversative, relatively mistake-free game last month while Wilson, perhaps too amped-up for his first career home game, became unglued early and didn’t recover until it was too late.

Wilson, of course, will have to be a lot better this time around if the Jets are to have a chance to get to 2-4 and tie the Patriots two games out of first place in the AFC East.

So, too, will Saleh and his staff.

But this is hardly any sort of mission impossible.