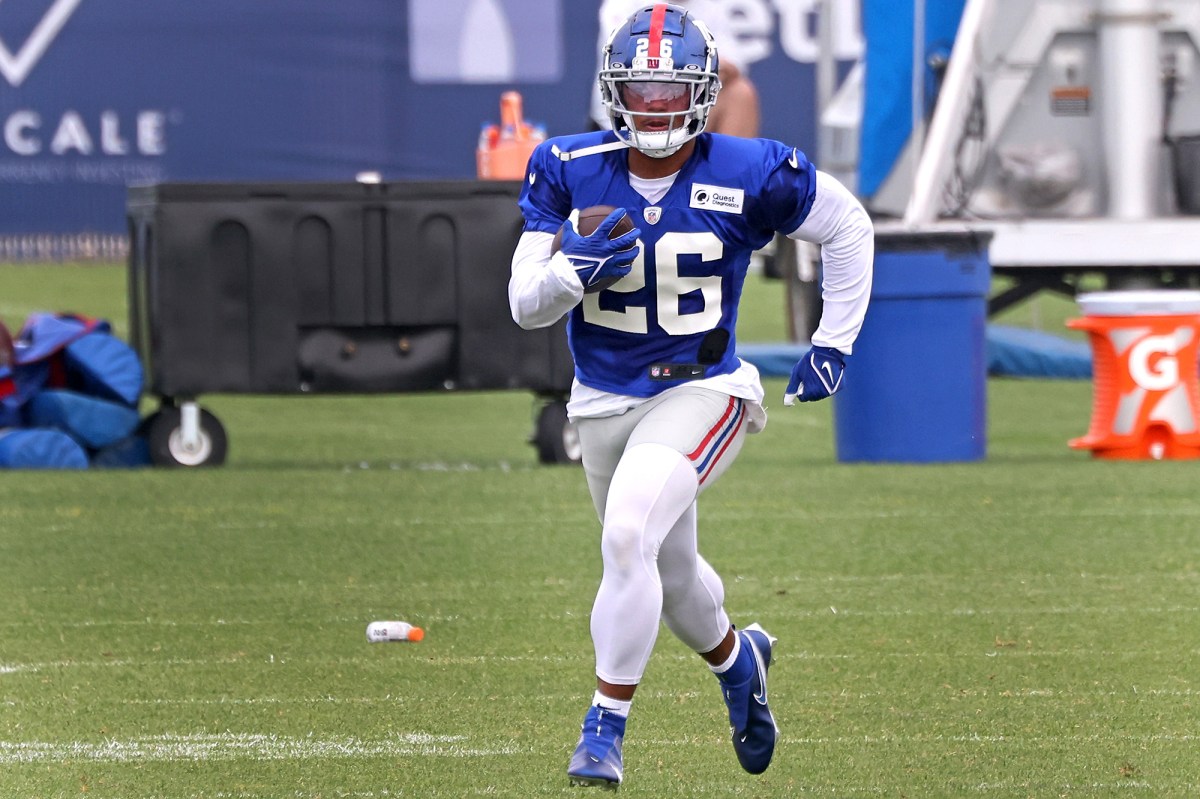 
A few guys greeted him with a “Whoa, who is that?’’ as he took the field. Hands were extended and introductions made by players he already knew quite well.

“It’s just fun being out there, that’s the stuff you miss,’’ Saquon Barkley said Monday as he took an important step forward in his return from reconstructive knee surgery. “Some of the guys on the defensive side can’t wait to get their hands on me because I do talk a lot of crap when offense and defense is going.’’

No one is putting their hands on Barkley any time soon, but the smile on the star running back’s face revealed some relief that finally, he was back where he belonged. The Giants activated Barkley from the physically unable to perform list and he made his training camp debut in a practice that was not even in full pads. Barkley participated in individual drills, caught passes from Daniel Jones on the side and also caught some good-natured grief from teammates who were thrilled to see him back among them.

By starting this next phase, Barkley has five weeks to show his right knee can withstand the pounding it must be able to take before the decision must be made whether or not to unleash him Sept. 12 in the regular-season opener against the Broncos.

“Yeah, I would say it’s a good time,’’ Barkley said. “I think I know what you are trying to get at with me and getting ready for the regular season. I’m not even thinking about that. I just wanted to be able to get out and practice and just play football with my teammates again, and I’m very fortunate that day was today.’’

Of course you know Barkley has an eye on the opener, even as he takes things slow and steady, and makes sure he listens to his coaches, trainers and Giants medical staff.

Barkley went down early in the second quarter on Sept. 20 in Chicago, suffering a torn right anterior cruciate ligament and also damage to his meniscus. After strengthening the area around the knee, Barkley underwent reconstructive surgery to repair the ACL and the partially torn meniscus on Oct. 30. He missed the final 14 games of the season.

He did a great deal of watching two weeks into camp and finally had enough of it. Barkley lobbied for more, and Saturday was told he would indeed get more.

“Got to a point in rehab where running over there against garbage cans and cutting on cones and stuff, it’s all good, but now I get to start reacting off of other athletes,’’ Barkley said.

This will continue to be a slow ramp-up.

“There’s only so much you can do at a certain point with the trainers and strength coaches on the field by yourself. It’s time to get him moving forward and as long as they say it’s safe for him to do, we’ll keep on pushing.’’

Judge acknowledged Barkley has been “tapping his foot for a while’’ and the time was right to get him in the dance.

Barkley said at one point he had to ask fullback Eli Penny where he was supposed to line up in warm-ups. “Kind of feeling like a rookie out there again,’’ Barkley said.

There will not be any seven-on-seven work or 11-on-11 team-period action for Barkley just yet. The Giants open their preseason with a game Saturday night against the Jets, and Barkley will not play. He might not play in the two remaining preseason games after that, either.

Judge said “theoretically, yeah’’ when asked if he would be comfortable playing Barkley in a preseason game.

“Am I looking to put Saquon into something that’s not going to be in his best interest?’’ Judge said. “Absolutely not, but at some point the doctors say, ‘He’s ready to play,’ and if we have the opportunity to get him in at a certain point, we will. But I’m not going to press that timetable.’’

Barkley said he will do what he is told to do, noting he prepped for his first three NFL seasons with little or no work in preseason games.

As for being ready for the real opener, Barkley said, “I don’t know’’ and then revealed a bit more, sounding relieved he is back on the practice field and confident in what he can show between now and kickoff against the Broncos.

“You guys know how I am as a competitor, I’m pretty sure you guys know what my thought process is,” he said.

His thought process is to play. Five weeks to go.