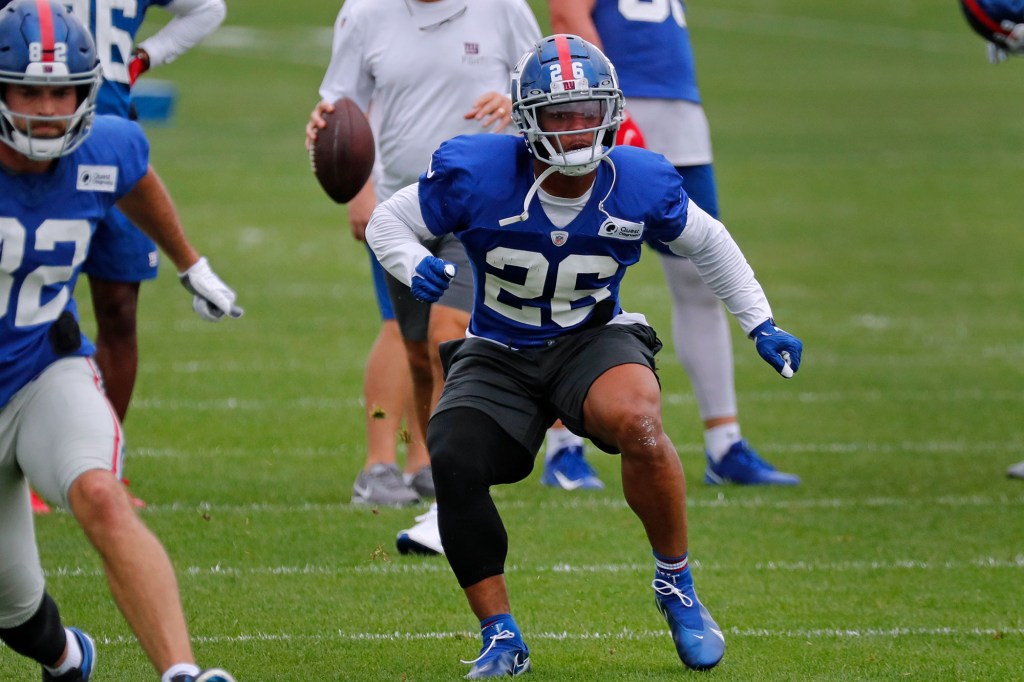 Saquon Barkley has answered all the questions on the test.

Now it’s time for the Giants’ beloved running back to take a new test.

When he suits up in the Giants home blue for Sunday’s season opener against the Broncos at MetLife Stadium, it will have been 357 days since the anterior cruciate ligament in Barkley’s right knee was obliterated on Sept. 20, 2020 in Chicago.

As emotional as it’s certain to be for the 24-year-old, who is starting his fourth season, Barkley’s presence on the field cannot help but provide powerful psychological lift to his teammates, who’ve watched him grind his way back to this point for the past 11-plus months.

Sure, every player is going to be stoked to play in the season opener. But every bit of extra oomph helps, and Barkley taking handoffs from Daniel Jones, making those violent cuts and making defenders miss is sure to give his teammates goose bumps.

If any of his teammates finds himself scuffling on Sunday or sucking wind because it’s the opener and no one’s acclimated to 60 minutes of football yet, all anyone will need to do is look at Barkley and think about the uphill road he took to get back onto the field. That cannot help but make them push themselves harder.

“I’ve been thinking about just playing back on Sunday in front of fans since probably a week after my injury,’’ Barkley said Friday after practice. “Obviously, you have that little state of mind where you’re upset. You’re like, ‘Why me?’ You’re depressed and this and that, but then … you’ve got to start grinding and getting yourself back.

“I’m a big visualizer thinker, so I’ve been fantasizing of getting back on that field with my teammates and playing in there in front of fans. Obviously, last year we didn’t have fans, so whenever the opportunity does come, it’s something that I’m definitely going to cherish and never take for granted again.’’

Giants head coach Joe Judge said before Friday’s practice that Barkley “has had a good couple of days’’ of practice, adding, “I’d say his work on field has been very promising, he’s done a lot of things that we need to see.’’

Asked what it would take for Barkley not to play Sunday, Judge said, “I’d say some kind of a setback that’s unforeseen … or some kind of response to his body after practice.’’

Barkley, asked after practice if he had any sort of setback, said, “I didn’t have a setback.’’

So, all systems are go for a Giants team that has had a bad run in season openers, winning only two of them since 2010 and not winning a season opener at home since 2010. For context, that was the last year the Jets made the playoffs.

Having Barkley back on the field may be the difference for the Giants as they enter the game as home underdogs to the Broncos, who went 5-11 last season and haven’t been to the playoffs since 2015, with Peyton Manning at quarterback.

“Having him out there on the field psychologically would be a big deal for the team,’’ defensive lineman Leonard Williams said Friday. “He’s a captain on the team, he’s a great player on the team and guys definitely look up to him and respect him.’’

Receiver Kenny Golladay, who was signed as free agent this past offseason, has found himself moved by Barkley’s determination to get back.

“I’ve seen the work he’s put in,’’ Golladay said. “I’ve seen, once he got back on the field, how happy he was that he was able to feel like himself again and that’s huge. Having [number] 26 out there on that football field with us is going to make a lot of peoples’ day a lot easier.

Receiver Sterling Shepard conceded that he has stolen a look or three at Barkley in practices.

“You can’t help but get excited sometimes seeing him running around out there,” Shepard said. “It’s been a long road, and to see him back out there doing what he loves is ultimately what I would like to see.”

Everyone will get to see it Sunday. It should be quite a sight.

Don’t expect anything too different if Mets, Yankees change managers