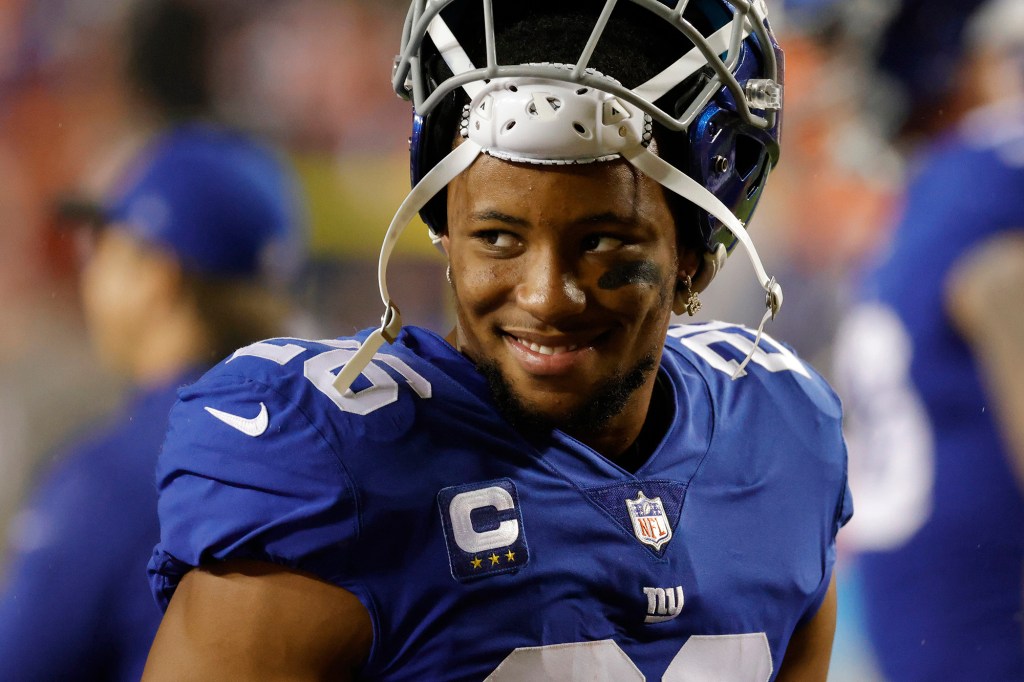 
For all that has gone wrong, it appears the Giants were impeccable in their plan and execution of the Saquon Barkley Comeback. Slow. Steady. Unrushed, but with a tinge or urgency, knowing the Sept. 12 season opener was always a target Barkley wanted and, in some ways, needed to hit.

Through two games, has Barkley reached the rarefied level that made him a feared — yes, feared, when it came to how defensive coordinators viewed the challenge of stopping him — ball-toting weapon? Not at all. Do the Giants need more — much more — from him if they are to become a balanced offense and, you know, actually win a few games here and there? Yes, of course.

That Barkley has progressed, improved, shown increased durability and stamina are all positive developments for a team that has claimed its annual birthright of being 0-2 two weeks into the season. Barkley’s surgically repaired right knee is sound. He appears confident in it.

Now he has to continue to shake off the rust accrued during 11 months off the field, and sharpen his cuts and reads to enliven a running game that cannot rely on quarterback Daniel Jones to lead the team in rushing.

Jones using his legs figures to be an as-necessary part of the game plan, heavy one week and light another week. He has 122 rushing yards on 15 carries, a robust average of 8.1 yards. Barkley in 23 attempts has 83 yards, averaging 3.6 yards, but his production thus far is uneven.

The best sight for Barkley was his 41-yard burst at Washington. Take away that gain, though, and he is averaging 1.9 yards per attempt. Of his 23 rushes, 14 are for 2 or fewer yards. With a once-again reconfigured offensive line, it remains to be seen if the run-blocking will be able to work in concert with Barkley. The pass-catching aspect to Barkley’s game has been slow to come around, with just three receptions for 13 yards.

“I was pleased at how he moved around,’’ head coach Joe Judge said. “He did some good things for us in the game. He played tough for us. He ran the ball hard. Obviously, he’s going to be a key part of our offense and our team. He’s a key leader on our team. We’ll keep finding ways to be creative and get it to him. Again, look, this guy getting out there, getting his feet wet the first couple of weeks and getting moving with it, I’m really encouraged with where he’s at right now.’’

With Nick Gates done for the season after suffering a lower leg fracture at Washington, the Giants lose their most consistent offensive lineman. Gates in Week 2 moved from center to left guard, with Billy Price moving in at center, and now another alteration is necessary, with Ben Bredeson the only real option to take over at left guard. Price (Bengals) and Bredeson (Ravens) were acquired in late-summer trades, and the Giants are now desperate in their reliance on spare parts off other teams.

Can this new line help Barkley get going? It was not up to the task at the key moment Thursday at FedEx Field. The Giants, after an interception by James Bradberry, were in business on the Washington 20-yard line, trailing 27-26 with 2:16 remaining. Judge wanted to force Washington to burn timeouts and signed off on two run calls to Barkley, with negligible results — 3 yards. The Giants settled for Graham Gano’s fifth field goal, but their defense coughed up the lead in a 30-29 loss.

“I don’t know at any point that we said we’ll leave it in the defense’s hands,’’ Judge said. “We gave the ball to our running back for two good runs and tried to get it vertical. We took a chance on third down with a reception. Had we converted right there, it would’ve been a different story in a lot of things.’’

Barkley’s workload is on the rise, from 29 snaps in the opening loss to the Broncos to 58 snaps (84 percent) just four days later in Washington.

“I was able to get out there and play a full game,’’ Barkley said. “My body and my knee responded well, so I kind of knocked that rust off. I’ve got to continue to trust the knee, trust the system and as the system keeps going, I’ll continue to do better.”

With a 10-day break between games, Barkley should be ready for a full load in Week 3 against the Falcons.

“I was pleased with the way he responded on the short week and came back,’’ Judge said. “Physically, he looks good. Obviously, like all players, he’ll get a little extra downtime, some rest, time to get their bodies back right now and then got to get plowing ahead going forward.’’

‘Once Upon a Time’ provides comfort from current Mets’ reality