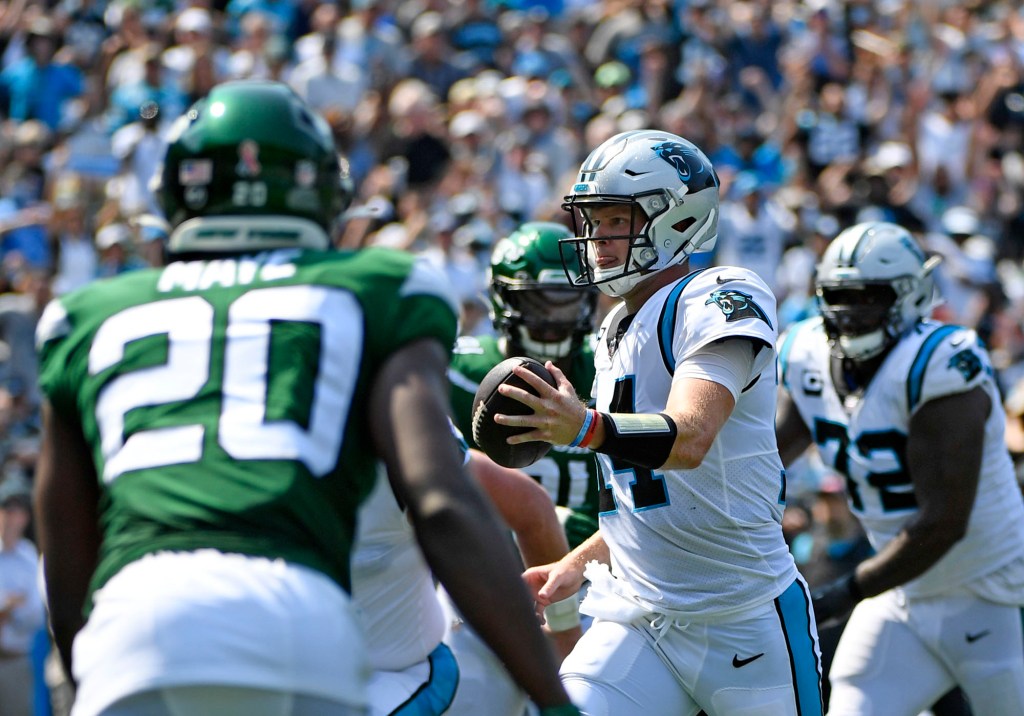 That was the message Sam Darnold delivered to the Jets on Sunday.

Those words, of course, didn’t come from Darnold’s mouth, because that’s not who he is, it’s not his personality. Darnold has never been prone to rub-it-in touchdown celebrations.

But that’s exactly what Darnold said to the Jets with his play in the Panthers’ 19-14 win over his former team at Bank of America Stadium.

The worst fear of every Jets fan entering Sunday’s season opener was realized: Darnold showing up the team that drafted him with the No. 3-overall pick in 2018 and quit on him after three disappointing and unproductive seasons in green.

Add to that just enough Robby Anderson sprinkled into the open wound to make it sting a just little more and it added up to another lousy day for the Jets.

The Panthers’ win was hardly artistic — they left a few points off the board and should have put the Jets away before halftime — but it was revealing enough to show how good Darnold can look with some skill-position talent surrounding him and an offensive line to protect him.

So, Darnold is 1-0 with a solid supporting cast and competent coaching staff while the Jets are 0-1 and in the throes of what seems like their 50th rebuild since their only Super Bowl victory.

Darnold’s first half numbers — 17 of 22 for 234 yards, one TD passing, one rushing — were better than what he produced in most of the full games in which he played for the Jets.

Darnold’s performance, opposite Jets rookie quarterback Zach Wilson, was enough to make you wonder what he might have looked like had the Jets not traded him to the Panthers and general manager Joe Douglas built the team around him — something team management failed to do for the better part of his three years with the team.

Darnold, of course, never had a player on the Jets with a fraction of the talent of Panthers all-everything running back Christian McCaffrey, who rushed for 98 yards and caught nine passes for 89 yards Sunday.

When his satisfying victory was in the books, Darnold was predictably bland in his postgame press conference.

“I’m not going to lie … seeing them on the other side, that was a little different for me,’’ he said.

He did participate in a pretty animated celebration with teammates and fans after his 5-yard TD on a quarterback draw that gave the Panthers a 16-0 lead.

“It was great to be able to get in the end zone,’’ Darnold said. “It was a great play-call.”

Asked if he kept the football, Darnold smiled and said, “Oh, yeah,’’ as if he was incredulous the question needed to be asked.

One play after the Jets failed on a fourth-and-1 try in the second quarter, Darnold made them pay by hitting Anderson in stride on a 57-yard TD pass that gave Carolina a 9-0 lead.

Anderson, the speedy receiver Jets management lowballed in contract negotiations after the 2019 season and lost to the Panthers in free agency, slipped behind Jets defensive backs Marcus Maye and Sheldrick Redwine and made the pass and catch look too easy.

On this day it wasn’t Darnold who was seeing ghosts. It was the Jets being haunted by the ghost of their former quarterback.

“I got to make a big, impactful play and remind them,’’ Anderson crowed afterward.

“We really didn’t think about it like that,’’ Darnold insisted. “It was just a good connection for a touchdown.’’

It was a combination that made Jets fans sick, and one that Darnold had to be thinking about. Human nature is a powerful emotion.

“I was anxious to see how he would be in terms of playing the Jets,’’ Panthers coach Matt Rhule said. “It looked like he had fun the whole day. There was not a moment when I had to say, ‘Hey, calm down, hang in there.’

“Sam’s resilient. This whole week, he’s been so locked in I didn’t have a question. He was ready to go all week and played like it.’’

Rhule said he “teased’’ Darnold a couple times during the week, asking, ‘‘Hey, are you going to be all emotional about the game?’’

“He was making fun of me before the game saying, ‘You’re saying hi to more people than I am,’ ” Rhule said.

“Anytime you play against your old team, that’s real,’’ McCaffery said. “We were fired up [for him] and he led us the whole game. We’re just lucky to have him. I’m fired up he’s our quarterback.’’

After what they saw on Sunday, there surely are some Jets fans sad he’s not still theirs.

Florida’s ‘quarterback controversy’ shouldn’t be one at all