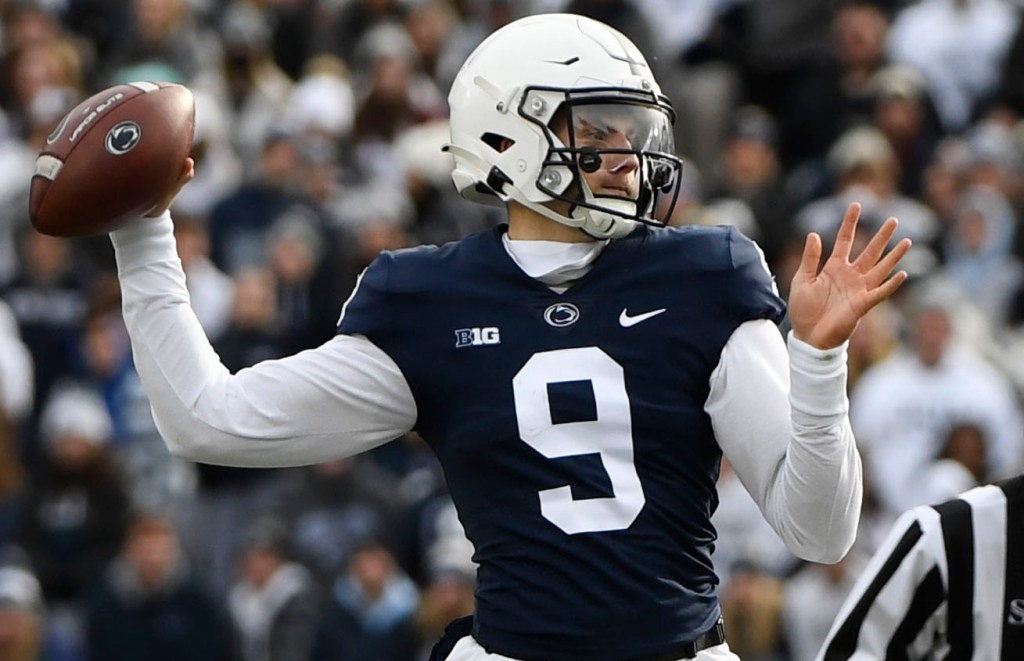 
STATE COLLEGE, Pa. — Christian Veilleux used the biggest opportunity of his young college career to make up for a lost time on Saturday, and he also put a big dent into Rutgers’ bowl dreams.

Penn State’s freshman quarterback, who was out of football a year ago when his high school canceled the season due to the coronavirus pandemic, stepped in for an ailing Sean Clifford and shook off the rust.

Veilleux sparked what had been a lifeless Penn State offense with three touchdowns in a 28-0 win over Rutgers on Saturday.

Veilleux was not available for comment after the game as Penn State does not allow freshmen to speak to reporters.

“We faced as much adversity in this game as I’ve been around,” Penn State coach James Franklin said.

As for Rutgers, they haven’t played in a bowl game in seven seasons and will need to win against Maryland next week to punch its postseason ticket.

While Schiano was subdued and disappointed in the visiting team media room, he still thinks the Scarlet Knights can end their postseason drought if they can clean up a few mistakes against five-win Maryland.

“We still, in the last game of the year, have the pen in our hand and we have a chance to write it,” Rutgers coach Greg Schiano said. “And so does the team we’re playing.”

The Scarlet Knights played hard on defense, but had no help on the other side. Penn State’s defense was a big part of their struggles, but the Scarlet Knights still dropped balls, committed penalties and got very little push with their running game. They’ll need to be a lot better next week if they want to make their first bowl appearance since 2014.

Jahan Dotson, Parker Washington and Malick Meiga caught touchdown passes and Keyvone Lee ran for a score for the Nittany Lions who snapped a two-game skid at Beaver Stadium.

The Nittany Lions (7-4, 4-4 Big Ten) did so with 35 players battling flu-like symptoms through the week and up to kickoff. Clifford, who left the game midway through the first quarter, was among them.

The three-year starter missed warm-ups as he was receiving fluids in the locker room. Afterward, Clifford told Franklin he felt like he could play. It didn’t last. Clifford was just 2-for-8 passing with 23 yards before he returned to the locker room for more treatment.

Although he had never played a collegiate down and took a while to find his rhythm, Veilleux settled in and the rest of Penn State’s offense did enough in the second half to beat the Scarlet Knights (5-6, 2-6) for the 15th straight time.

Veilleux completed 15 of 24 passes for 235 yards. His eight-yard pass to Dotson with 1:03 to play in the second quarter broke a scoreless tie and was the lone highlight to that point in a game that had been without any.

“That led to more confidence and more eagerness to make plays like he did today,” Washington said.

Both offenses traded punts and just-missed turnovers in the first quarter. They combined for just 53 yards on 31 plays in the opening 15 minutes before Penn State managed the 10-play drive capped by Dotson’s 10th touchdown catch of the year.

Penn State was much more efficient in the second half where Veilleux ended a pair of quick third-quarter drives with big plays.

He dropped a 17-yard pass in to Washington in the end zone with 3:32 to play in the third, then hit an uncovered Meiga over the middle for a 67-yard score two minutes later.

Penn State’s defense did the rest.

Rutgers was held to 165 yards, forced to punt 10 times, converted just 4 of 15 third downs and crossed midfield just once — in the opening minute of the fourth quarter.

Noah Vedral led the Scarlet Knights with 91 yards on 12-of-23 passing.

“That defense is Top 10 for a reason,” Schiano said. “Without watching it I can’t tell you why we couldn’t run the football even a little bit.”