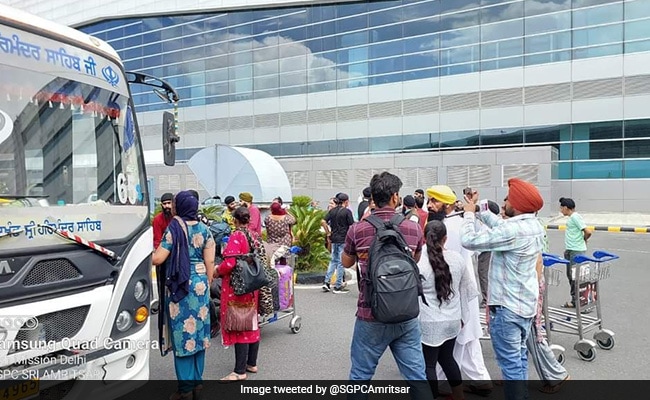 28 Afghan Sikhs were flown in from Kabul on Wednesday. (FILE)

Satpal Singh, 28, and his Afghan Sikh family heaved a sigh of relief after they arrived in India from Taliban-controlled Kabul, hoping to begin a normal life in this country.

Gurdwara Karta-E-Parwan in Kabul, where more than 150 Sikhs were staying, was struck by terrorists on June 18. Mr Singh’s shop, too, came under the attack. To make things worse, he could not get his ailing father treated as he had minimum access to hospitals.

Mr Singh told PTI that the Taliban takeover of Afghanistan not only pushed the Sikhs there into financial misery, but also kept them under constant fear.

“My shop was targeted and there was a blast too. All that happened in front of my own eyes. It was the same time when the gurdwara was attacked. We panicked and remained in fear all the time,” Mr Singh said.

His father underwent a surgery last month. “We had been waiting for his treatment for a long time. He was severely wounded and as we did not have access to hospitals, the wound got infected,” he said.

“We finally managed to get his treatment done in July and now that we’ve moved from Kabul, we’re relieved,” he added.

He was among the 28 Afghan Sikhs who were flown in from Kabul on Wednesday with assistance from the Shiromani Gurdwara Parbandhak Committee, Indian World Forum and the central government, officials said.

Recalling the last few months in Afghanistan, Mr Singh said the environment in Kabul, especially for the minorities, was scary. “We used to fearfully step out of our houses even for work. The last one year was very tough and challenging,” he said.

Manjeet Kaur, also an evacuee, said the lives of children from minority communities were even more difficult. “Considering their safety, they were never allowed to step out of homes,” she told PTI.

“The children had no idea of what the world outside the four walls looked like. We had to ensure that they stayed indoors all the time. Situation there is volatile, especially for women and children,” she said.

sikhs from afghanistan who arrived in India, Sikhs In Afghanistan