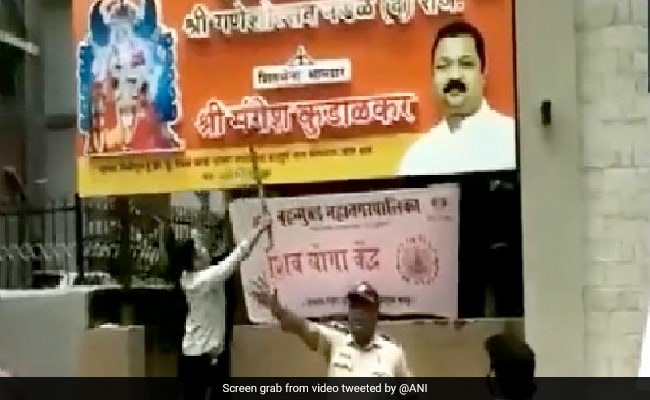 Maharashtra Political Crisis: Mangesh Kudalkar is one of the 38 Shiv Sena rebel MLAs.

The office of one of the rebel MLAs of Shiv Sena, Mangesh Kudalkar, was vandalised on Friday allegedly by party workers amid the ongoing factionalism in the party.

Mangesh Kudalkar is one of the 38 Shiv Sena rebel MLAs who has camped in a Guwahati hotel under the leadership of MLA Eknath Shinde.

Notably, Eknath Shinde was elected leader at a meeting of rebel MLAs at the hotel where they are staying.

The meeting also unanimously decided to authorise Eknath Shinde to take a decision about the future course of action.

In a video released by the Eknath Shinde camp on Thursday evening, he is heard saying that they will be together in any situation and face everything together.

“We will be together in every situation. We will face everything with full unity. We will end up victorious in the end,” he said.

“As you all have said that they (BJP) are a national party and a ‘mahashakti’… All saw what happened to Pakistan…They have told me that the decision I have taken is historic and they are backing us. They would not us lag behind in anything. They will support us if there is a need and this will be felt whenever such a situation arises,” Eknath Shinde added.

Amid the continuing political crisis in Maharashtra due to revolt in the Shiv Sena, NCP chief Sharad Pawar, Deputy CM Ajit Pawar arrived at Matoshree, the residence of the Chief Minister Uddhav Thackeray in Mumbai.

The leaders were accompanied by state minister Jayant Patil and NCP leader Praful Patel. The leaders are expected to discuss ways to prevent fall of MVA government, which also includes Congress.

Ajit Pawar said earlier in the day that the NCP stands with the Chief Minister and will try to “keep the government stable”.

Thackeray convened a meeting of district chiefs of the party and said he left Varsha Bungalow, the official residence of the Chief Minister, but not the “will to fight”.

“I have said it earlier also that I don’t have anything to do with power. The people who used to say that they would rather die than leave Shiv Sena have fled today,” he said.