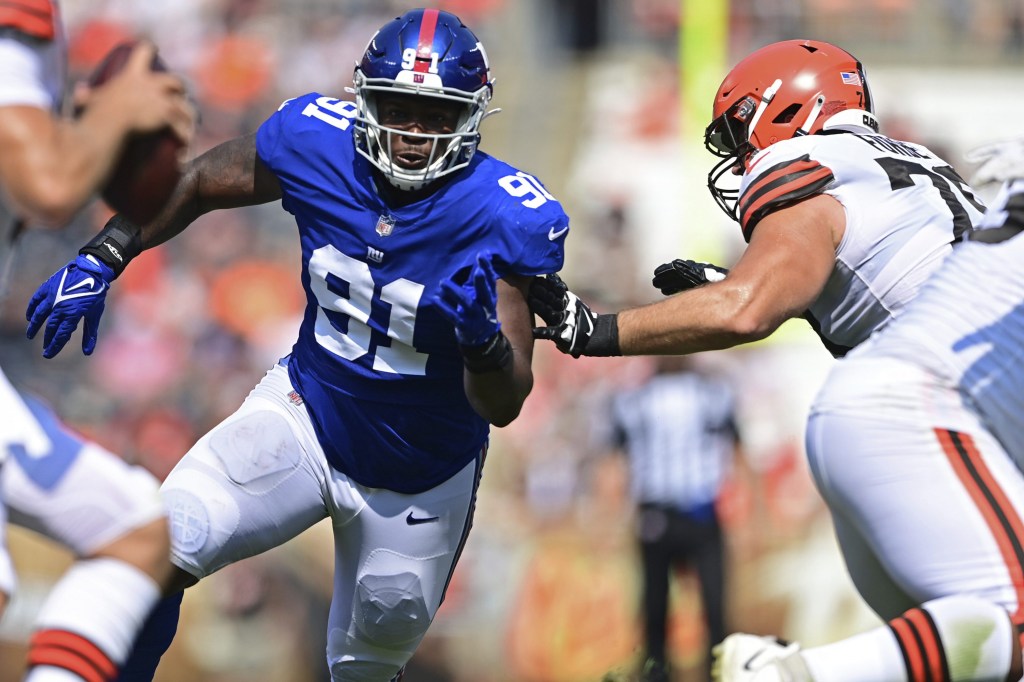 He grew up wanting to play for the New York Football Giants. He wore No. 91 in high school because Justin Tuck was a hero. He wore No. 92 his first three years in college because 91 was unavailable, and Michael Strahan was a hero, too. And on a cruel cutdown day in the NFL, when so many childhood dreams were shattered, there was cheering in Sumter, S.C., and at Georgia Southern:

Their dreamer, their underdog, made it.

Nothing is etched in stone, of course — between now and the start of the regular season, there are always vacancies at the Heartbreak Hotel — but at 4 p.m. Tuesday, defensive end Raymond Johnson III, the last man standing of the three unsigned free agents, was a New York Giant.

“I’ve been trying to stay calm all day,” he said with a smile following practice,”but definitely a milestone for me.”

The Giants sent him to his first interview podium on the patio on the biggest day of his football life. He is 6-foot-3, 270 pounds and wears Tuck’s 91 proudly — and picked his brain when the Super Bowl hero visited camp at the beginning of August.

“Hey man,” he recalls Tuck telling him, “anybody cannot wear this number, so you better be right.”

When he walked off the podium, I asked him about Strahan.

“Originally I started off and I liked Tiki Barber and stuff because I thought I was an offensive player,” Johnson said with a smile. “But Michael, man, he changed the game, man, he was so disruptive. Every time I turned on the screen, it was like he was all over the field making plays, I’m like, ‘I want to be like that guy when I get older.’ ”

Fairytales can come true, they can happen to you.

“I think it was third grade or second grade, he wrote a report about being on the New York Giants when he was a kid,” father Raymond Johnson II told The Post. “For him, all this is like a fairytale dream just coming to pass.”

The road was not without potholes on the journey.

“When he was playing rec ball,” his father said, “he was kind of always overlooked. … Then he got to middle school football and he got overlooked again in the seventh grade and he got discouraged and didn’t want to play anymore. And then in the eighth grade I forced him to go back out there.”

Raymond Johnson III: “Now you got better players, a lot more talent and stuff, and I think I wasn’t reacting right to it … just ready to quit because it wasn’t going my way. … [Dad] would tell me … nothing worth having is ever easy in this life.”

He began opening eyes at Sumter High School, though not major college eyes, because he was considered a project. By now he relished being the underdog.

“I take pride in that,” Johnson III said. “Park and rec, I felt like I was always overlooked, there were always guys that people looked at more than me, and I always felt like I had that it factor. I started seeing success in high school, started becoming a known guy in the state, I felt like I should have been ranked higher.”

He went on to become All-Sun Belt Conference first team his last two years at Georgia Southern, and of course he wasn’t drafted. It motivates him to this day.

“Everything I do, man, I take that underdog mentality,” Johnson III said.

The news that Raymond Johnson III had made the 53 was celebrated by Georgia Southern coach Chad Lunsford.

“I love that it’s paying off for him, ’cause he is a great person, and a really good football player,” Lunsford told The Post.

Raymond Johnson III was voted a captain by the team.

“We want guys that are blue collar, there’s nothing given, everything’s earned around here,” Lunsford said. “We want disciples guys that can be self-disciplined, and then we want tough guys, not only physically tough, but mentally tough guys. And Raymond just really fit all of that.”

He grew from a 225-pound pup with help from Georgia Southern strength and conditioning coach Matt Greenhalgh.

During the season, Johnson III could almost reach out and touch his dream.

“He was pretty strong throughout the year going, ‘Coach, man, I just know it’s my year, I can feel it that I’m gonna be able to reach my goals and my dream,’ ” Lunsford said. “And, to get this news today, it just fires me up, man, because he knew it, and he went and got it and he earned it.”

“Yeah, he’s a high-motor guy, he’s definitely shown some pass-rush skills for us,” Judge said. “He’s a young player developing, quiet guy, big personality as far as the smile. … Definitely gets out there and works hard for us every day. He can play to his length. He’s still far away from where he’s going to be as a player, midway through this year and this year, next year, and that time he’s going to keep on getting better. That’s going to happen because of his commitment to the process and work ethic.”

Johnson, who received $130,000 in guarantees, was asked what he brings to Judge’s Giants, and he drew laughs when he said: “Besides the obvious reasons, young legs, cheap …”

He is well aware that nothing is guaranteed, however. Today’s 53 can change tomorrow.

“With the snap of a finger,” Johnson said. “I feel like the moment you become complacent every day, you stop getting better, so I’m always looking to get better.”

If he does, better days are ahead for him.

His mother Yvonne: “That’s been Raymond’s dream since he was a kid. “I don’t even have words.”

“I never in my wildest dreams thought that I’d have a son in the NFL.”

Giant day for all of them.