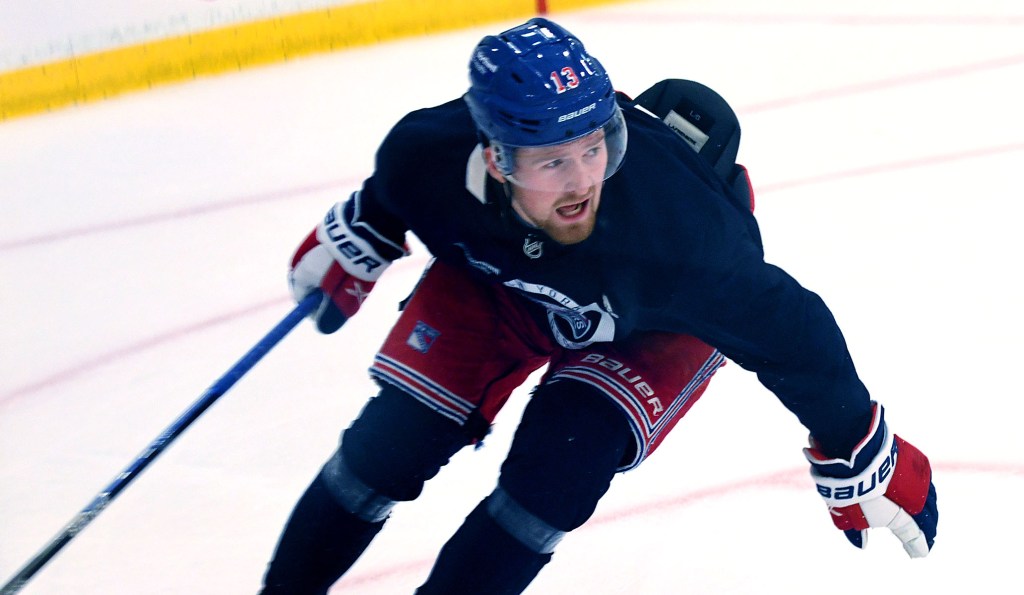 Alexis Lafreniere has a little different look about him. He’s leaner and lighter. He’ll be quicker on the ice following a summer workout regimen designed to address issues that arose during a challenging rookie season contested in a unique environment.

Lafreniere’s numbers, 12 goals and nine assists in 56 games for the Rangers following his No. 1-overall selection in the October draft, were underwhelming even if his play outdistanced his stats. He won his fair share of battles, but did not have the explosiveness to separate after gaining the puck. He did not have breakaway speed in the middle. He might have been a little heavy for the NHL.

“I got a little faster. I would say that was the main thing. I lost a little bit of weight, and that helps, too,” Lafreniere said Thursday, after the Rangers’ first training camp session. “I skated a couple of times a week. I [worked out] in the gym, too. That’s where you get a lot stronger.

“It helped a lot for sure.”

Lafreniere skated at right wing with Mika Zibanejad in the middle and Chris Kreider on the left throughout Thursday’s scrimmage. That represents the Rangers’ perfect-world top unit. Lafreniere skated a fair amount with Zibanejad a year ago, getting 239:15 at five-on-five with No. 93, most often lining up on his natural left side with Pavel Buchnevich on the right.

“Everyone knows his attributes and his skill level, and I think at the end of last season he started working a lot harder,” Zibanejad said of the winger, who scored four goals over the final nine games. “He really put the work in and he did this summer, as well.

“I feel like he’s allowing his skill set to come out even more now. I could see that just from the hour scrimmage. I’m super excited.”

Lafreniere’s rookie season commenced without benefit of either a normal training camp or preseason exhibitions in which to prepare and ramp up to the challenges of the NHL game. Then-coach David Quinn looked after him as best he could before he was dismissed following the season, but big league life came at Lafreniere fast in a pandemic world that kept the teenager away from his parents and family for the entirety of the season.

“It was different for sure but it’s not an excuse,” said Lafreniere, who will turn 20 on Oct. 11. “You have to be ready, training camp or no. But camp is going to help me for sure get ready for the season.

“Having a full camp is huge. It’s my first one in my second year, so it’s pretty weird. You have more time to get ready and a full training camp is always a good way to get to know the guys. I feel a little better, for sure.

The Rangers and new head coach Gerard Gallant would prefer not to stack left wings Artemi Panarin, Kreider and Lafreniere. Moving one to the right would allow all three to play in the top six, which theoretically would include a second line of Panarin, Ryan Strome and Kaapo Kakko.

Lafreniere, who both has the aptitude to shift sides and is less set in his ways than veterans Kreider and Panarin, is the logical candidate to line up on the right.

“It’s a little different. You’re much more on your backhand, I feel,” Lafreniere said. “Me and Chris have talked about it a little bit. We’re still trying to figure it out and get better when the season starts. It’s reading plays. You just play hockey. I will try to adjust my game a little.”

Kreider, who at age 30 is the second-oldest Ranger behind 34-year-old Ryan Reaves, remains the chairperson of the Lafreniere Fan Club. That’s an honorary position No. 20 has held since Lafreniere spent months of the 2020-21 offseason as a training partner at the Prentiss Academy in Connecticut.

“He’s bright, happy, he loves being here, he loves playing hockey,” Kreider said. “He’s quick with a joke, he’s very laid back … until the puck drops. And then he competes as hard as anyone I’ve ever played with. He’s concerned about winning hockey games and he’s going to do the things it takes to win hockey games.

“He’s mature beyond his years. He’s very selfless in that he doesn’t think less of himself, he just thinks of himself, less. He was a guy that bought in — not that guys didn’t buy in — but he was a guy who bought in right from the get-go. His game just continues to grow and will continue to grow because his priorities are correct.”

Plus, he’s lighter now. A little quicker, too. Year II coming up.