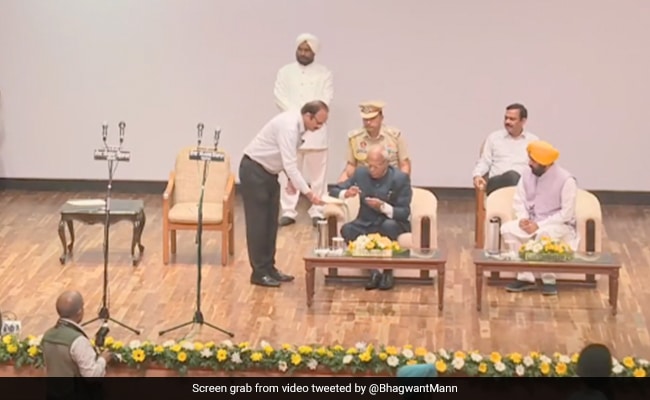 All the Aam Aadmi Party MLAs took oath in Punjabi.

Five AAP MLAs on Monday were inducted as ministers in the Punjab government as Chief Minister Bhagwant Mann expanded his cabinet.

It was the first cabinet expansion of the Mann-led government after AAP came to power in the state during the Assembly elections earlier this year.

Mr Arora was the first one to take oath, followed by Dr Inderbir Singh Nijjar, who is the MLA from Amritsar South seat.

All of them took oath in Punjabi.

Of the five new faces, four MLAs are from the Malwa region and one is from the Majha region.

With the induction of five more ministers, the strength of the Mann-led cabinet will reach 15, including the chief minister.

After AAP formed the government following its resounding victory in the assembly polls, 10 MLAs, including eight first-timers, were inducted as ministers in March.

However in May, Health Minister Vijay Singla was sacked from the state cabinet over graft charges, taking the strength of ministers to nine in the Cabinet.

There are 18 seats in the cabinet, including the chief minister. The Aam Aadmi Party came to power in Punjab by winning 92 seats out of a total of 117.