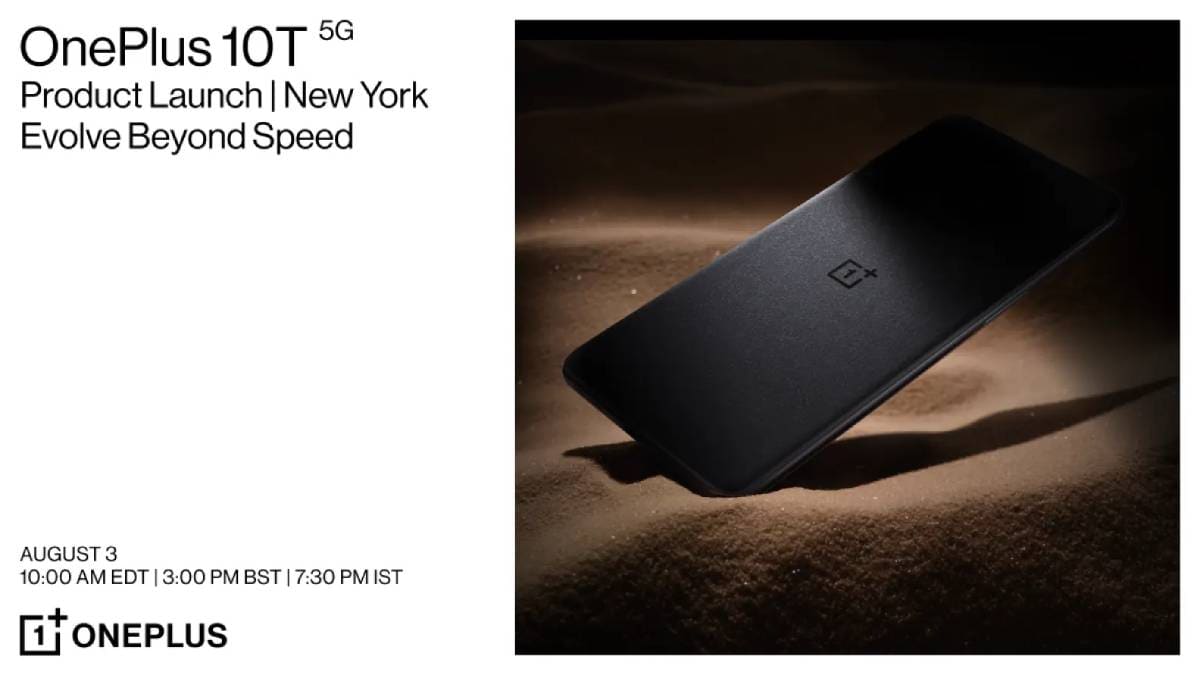 OnePlus 10T 5G is all set to launch on August 3. The launch event will take place in New York City at 10:00am ET (7:30pm IST). As announced by the company, the OxygenOS 13 will also launch alongside the OnePlus 10T in the same event. The OxygenOS 13, which will first launch with OnePlus 10 Pro, will retain the OnePlus’ features including always-on displays (AODs) and Zen Mode. Moreover, the OnePlus 10T 5G has been confirmed to be powered by Qualcomm’s Snapdragon 8+ Gen 1.

OnePlus has confirmed the launch date of the upcoming OnePlus 10T 5G smartphone on the company’s community page and via a tweet. As stated above, the OnePlus 10T 5G is set to launch on August 3 at an event at Gotham Hall in New York City at 10:00am ET (7:30pm IST).

According to the company, this in-person launch of the upcoming 10T 5G smartphone is going to be the first since the launch of the OnePlus 7T, which debuted in India back in 2019. Those who will purchase a ticket to attend the live launch event in NYC will get top-tier merchandise, along with OnePlus Nord Buds, as claimed by the company.

OnePlus will also launch the OxygenOS 13 alongside the OnePlus 10T, as mentioned above. The latest version of OxygenOS boasts a host of improvements to gaming, connectivity, and customisation. OxygenOS 13 will launch first on the OnePlus 10 Pro, followed by the OnePlus 10T later this year, confirms the company.

One can purchase their tickets from here to attend the event or can tune in to OnePlus launch site and OnePlus YouTube channel to watch the live launch.

The OnePlus 10T 5G is said to feature a 6.7-inch full-HD+ AMOLED display with a 120Hz refresh rate. It has been confirmed to be powered by Qualcomm’s Snapdragon 8+ Gen 1. It is said to offer a triple rear camera system headlined by a 50-megapixel main sensor alongside an 8-megapixel secondary sensor and a 2-megapixel snapper. The phone could pack a 4,800mAh battery with support for 150W fast charging. It may reportedly pack 16GB of LPDDR5 RAM and a maximum of 512GB of UFS 3.1 storage.

According to the latest reports, the OnePlus 10T 5G could debut in two colour variants. These colour options can be black and green.