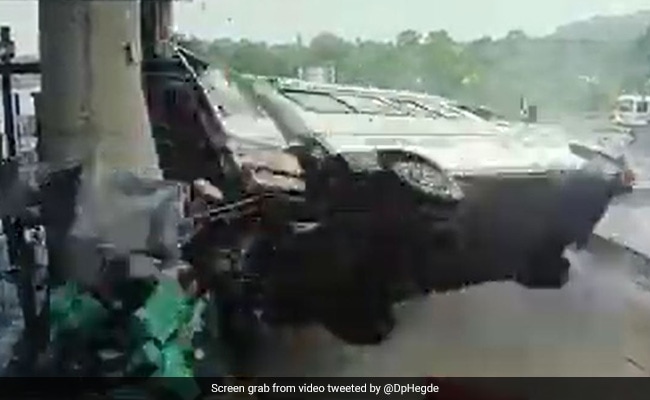 The ambulance aquaplaned just before hitting the toll booth cabin

An ambulance carrying a patient and two attendants lost control and crashed into a toll booth in Karnataka’s Udupi district today, killing all the three and a toll attendant. The driver was injured, the police said.

A CCTV camera at the toll booth shows the horrific accident on a wet road in the Karnataka coastal district where it had rained.

In the footage, some men who appear to be security guards and toll operators are seen scurrying to remove three plastic barricades from one of the lanes on seeing the ambulance approach.

The footage shows one of the guards successfully remove two barricades before the toll plaza. But the last barricade remains near the boom barrier, which a man manages to pull out, but only halfway.

By then the ambulance was almost at the toll plaza.

Suddenly, the ambulance – a large van – skids on the wet road and swerves towards the toll booth cabin.

The video clearly shows the ambulance had aquaplaned on the wet road after the tyres lost traction. Aquaplaning happens when the tyre tread can no longer dissipate water, leading to loss of control as the tyres would not touch the ground.