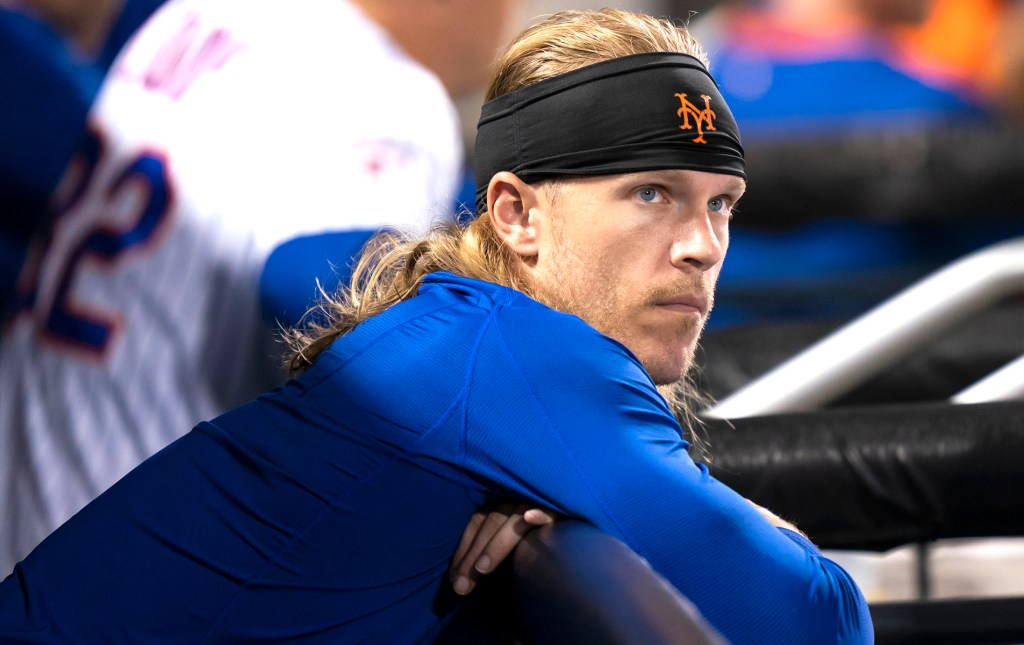 NY Post may be compensated and/or receive an affiliate commission if you buy through our links.

In some ways, he is as intriguing a solo figure as there is in the Mets’ organization. He has been a ghost for two years, a whisper, a rumor, which is remarkable because when he is around, and when he is healthy, it is impossible to not be aware of Noah Syndergaard — and not only on days when he pitches.

Spring training 2020 was canceled due to COVID-19 on March 12. Thirteen days later Syndergaard announced he was having Tommy John surgery. Normally such an announcement carries traumatic echoes that ring for weeks. But the country was numb on March 25, 2020. The world was upside down. And when baseball did return, it came back in a 60-game spasm that barely seemed worth the effort.

It was easy to forget Syndergaard and lament his absence in such a season, and by the time he started suffering setbacks this year it had been so long since Syndergaard had pitched an actual game for the Mets the muscle memory was all but gone. Plus, losing Jacob deGrom in July was a lot more traumatic.

Well, Syndergaard will pitch a rehab start for Triple-A Syracuse Wednesday, and if things go well he will likely throw another one on Saturday or Sunday. And then, sometime across the final seven days of the Mets’ season, the hope is that No. 34 will throw his first pitch in anger for the big league club in almost two years.

And then, after that …

“He has a lot of his career left and he has a bright future ahead of him,” manager Luis Rojas said Tuesday at Fenway Park, a few hours before his team would engage the Red Sox in a two-game series. “Even with these two years off, with what I see and what I hear from this kid I’m encouraged with what’s next for him.”

But where will that next chapter be?

Syndergaard is a free agent at season’s end, and the Mets are going to face a quandary about what to do with him. Had the elbow not gone sideways, they would already have either extended him or dealt him away. Surely even with resources, the Mets aren’t about to make him a multiyear offer, and unless they decide to devote a $20 million qualifying offer — also unlikely — they will be bidding with other clubs looking to marry a pitcher willing to take one year at short money with the option of rebuilding value.

The best-case scenario for this is Robbie Ray of the Blue Jays, who after several years of dropping velocity and increasingly poor performance signed a one-year, $8 million that he will surely parlay into a big-money deal after posting a terrific year (12-6, 2.72, a league-leading 238 strikeouts). Less so is what Corey Kluber has done for the Yankees on a one-year, $11 million deal after pitching one inning last year and 36 ²/₃ over the last two.

The possibilities are fascinating. If Syndergaard truly wants to bet on himself, he might figure on a relatively low one-year deal with a team like the Rays or the Astros, teams that have a track record of maximizing pitchers’ tools and reviving careers.

Still, what if the Mets aren’t willing to cut the cord on a player that was, after all, twice an Opening Day starter before deGrom had been given the honor once? Syndergaard’s most recent full season was a disappointment (10-8, 4.28 in 2019), but he was still capable of gems like the seven-inning, three-hit, 10-strikeout effort he threw at the soon-to-be-champion Nationals in September of that year.

“The man and the pitcher are both more mature now,” Rojas said. “These last two years have been a period of real growth for him.”

That probably won’t matter to whomever the new baseball chief is going to be since he will have zero personal loyalty to Syndergaard and will have a simple question to ask: is it possible for him to get all the way back? And at what cost to find out for sure?

That’s why it’s far more intriguing to see Syndergaard throw a few innings in the final week than deGrom, who really should just be shut down until Port St. Lucie. Much of what the Mets glean from Syndergaard will be based on spec, too — it is assumed he will be a starter again when fully healthy, not a one-inning stopgap.

But it will be fascinating to see what he brings with him to the mound, either at Citi Field or in Atlanta. How much will he look like the old Syndergaard? What does he project to be? The ghost is close to a return. For how long is anyone’s guess right now.

‘My darkest secret’: Uma Thurman reveals she once had an abortion