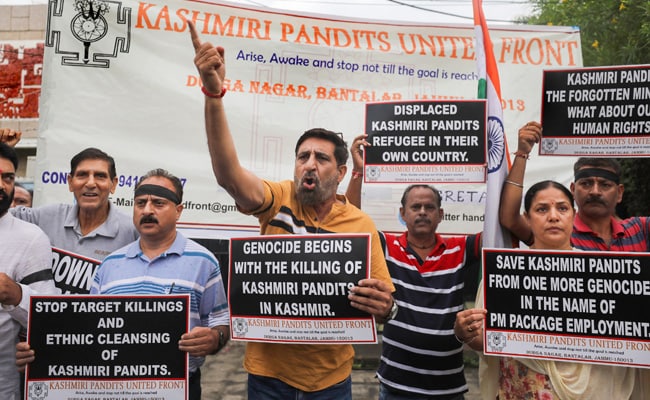 On June 20, Kashmiri Pandits holding a protest in Budgam, around 25 km from Srinagar. (File)

No Kashmiri Pandit has migrated from the Valley since August 5, 2019, when Article 370 was removed and Jammu and Kashmir lost its special status — that’s what the central government told Parliament today, even as there’s been a series of attacks on people from the Hindu and Sikh minority communities in the Union Territory over the past few months.

“As per record, no Kashmiri Pandit reportedly migrated from Kashmir during said period (August 5, 2019 to July 9, 2022),” Minister of State for Home Affairs Nityanand Rai submitted in the Rajya Sabha, to a question by Congress leader Digvijaya Singh.

“Five Kashmiri Pandits and 16 others belonging to Hindu or Sikh communities were among the civilians killed during the period,” he added, but cited overall data to say there’s been a decline in terror attacks.

The no-migration claim comes just weeks after targeted killings of Kashmiri Pandits and people from other minority groups by terrorists led to protests, and reports — complete with videos and testimonies of community members — about mass emigration. Some of them threatened to appeal to international human rights organisations for asylum if the central government failed to relocate them from the Valley.

This appeared to belie the government’s claims that removing Article 370 brought peace to the region. There were comparisons with the mass migration of the early 1990s when terrorism had peaked.

In today’s submission, the government said there’s been “substantial decline in attacks, from 417 in 2018 to 229 in 2021”. And between August 5, 2019, and July, 2022, terror attacks killed 246 people — 128 security personnel, 118 civilians. “The Government has a policy of zero tolerance (against terrorism), and the security situation has improved significantly in Jammu and Kashmir,” the minister said.

The minister’s written reply also cited figures from the Prime Minister’s Development Package, a scheme rolled out in 2008-09 by the Congress-led UPA government: “5,502 Kashmiri Pandits were given jobs in different government departments in Jammu and Kashmir.”

Last month, however, there was some acknowledgement of insecurities of the Pandit/Hindu and Sikh minorities in the Union Territory. At a meeting chaired by Union Home Minister Amit Shah on June 3 in Delhi, Lieutenant Governor Manoj Sinha was asked why his administration was unable to ensure safety of the Pandits.

Mr Sinha told the Home Minister that a special cell has been formed at his office for Pandits who’d gone back to the Valley under the Prime Minister’s Development Package of 2008-09. This cell, he said, would coordinate with districts and other departments to resolve issues.