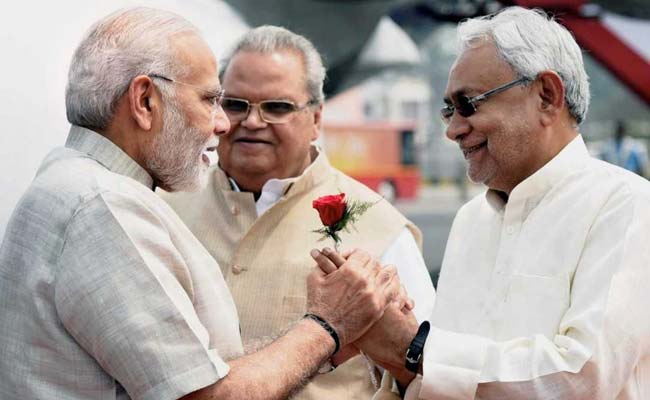 Before this, Nitish Kumar had skipped a dinner hosted by PM Modi. (File)

For the second time in a month, Bihar Chief Minister Nitish Kumar will be skipping an event led by Prime Minister Narendra Modi.

A meeting of the government’s think tank NITI Aayog, set to be chaired by the Prime Minister on Monday in Delhi, will not have any representative from Bihar, sources have said.

Mr Kumar, who just recovered from COVID-19, wanted to send his deputy but was told that the event was strictly for Chief Ministers only, sources said.

However, according to officials, the Chief Minister is set to hold his Janata Durbar on Monday – where he meets his constituents – resuming the event that had been cancelled for the past few weeks because of his health and other engagements.

Sources said Mr Kumar has long been less than fond of the NITI Aayog which puts Bihar at the bottom of state development rankings.

Before this, in the last month, the Chief Minister has also stayed away from a dinner hosted by PM Modi for outgoing President Ram Nath Kovind as well as the inauguration of President Droupadi Murmu.

He also skipped and sent his deputy for a meeting of Chief Ministers called by Union Home Minister Amit Shah.

Reports of Nitish Kumar’s friction with the BJP – which began not long after Mr Kumar made a comeback as Chief Minister despite the BJP’s better performance in the 2019 assembly elections – have grown in the past few months.

Now, the bickering between the two parties has almost become a regular affair, including recent face-offs over the Agnipath scheme, the caste census, and Mr Kumar’s run-in with the Bihar Assembly Speaker Vijay Kumar Sinha of the BJP.