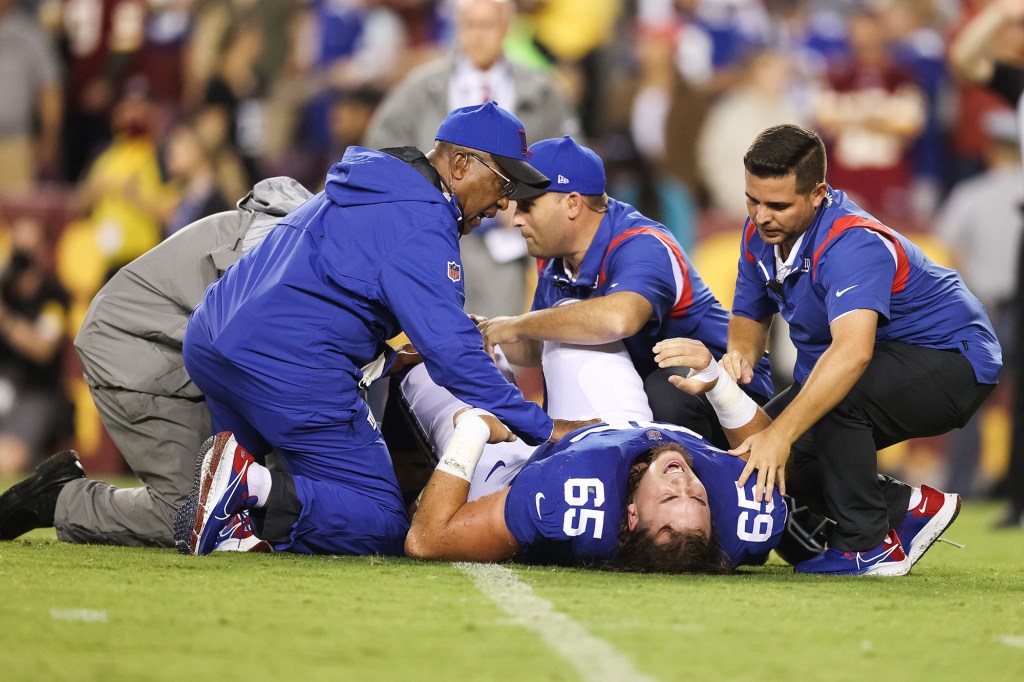 Nick Gates, a co-captain who unselfishly moved from center to left guard for Thursday’s game, suffered a lower-leg fracture in the first quarter against Washington. Gates rolled around in agony before his leg was wrapped in an air cast. NFL Network declined to air a replay because the injury was too gruesome.

The entire Giants sideline looked emotional and poured onto the field in support – speaking to the severity of the injury – as Gates was lifted onto a cart. He waved to the crowd before heading into the tunnel.

The Giants opened the game with a 79-yard touchdown drive behind a revamped offensive line.

Billy Price, who was acquired in a trade on Aug. 30 but didn’t practice until Sept. 6, started at center. It was a bold shake-up from four days earlier, a better-than-expected Week 1 performance when Shane Lemieux played the first three series before giving way to Ben Bredeson for the rest of the game. Bredeson replaced the injured Gates.

Lemieux was placed on injured reserve Thursday and will miss at least the next two games. He tried to gut through a knee injury suffered in the second practice of training camp. Matt Skura – a career 51-game starter– was signed off the practice squad to take Lemeiux’s roster spot. Another addition could be coming when Gates lands on IR.

Price is a former first-round pick (Bengals in 2018), and Gates, who never played center before last season, made one start at right guard in 2019 after playing tackle on both sides of the line in college. Gates embodies the versatility, toughness and consistency valued by Joe Judge.

The Giants are searching for stability at right tackle, rotating Nate Solder and Matt Peart.

“As long as you know it’s coming, it’s about preparation,” Will Hernandez, who was part of a left-guard rotation last season, said during the week. “When you go in there, you know you are going to have different guys next to you. We’ve been around each other long enough to where we’re at the point right now where we can do that if necessary.”

Cave discovery reveals how long people have been wearing clothing