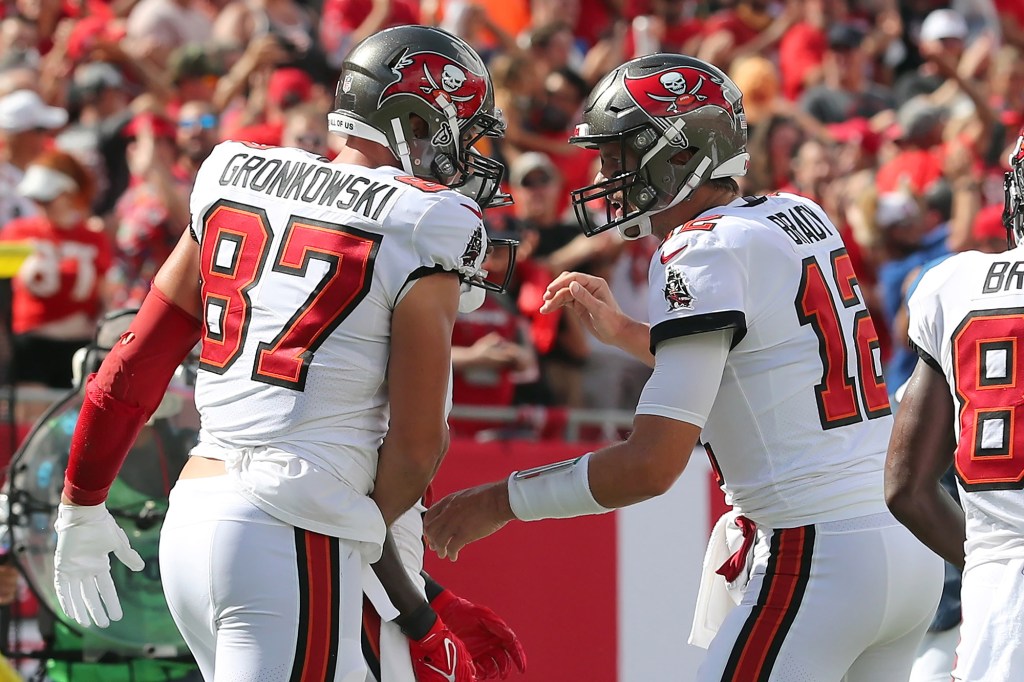 
It’s too soon to talk about the first undefeated 17-game regular season, right?

The Buccaneers have won 10 straight games dating back to last year’s regular season and playoffs. They’ve scored 30 points or more in the last nine of those games – a feat matched only by the Tom Brady-led 2007 and 2010 Patriots. You might remember the 2007 Patriots won 18 straight before losing Super Bowl XLII.

So, there’s no doubt which team is newly atop The Post’s power rankings this week:

Brady’s nine touchdowns through the first two games are the most in his career. Four of them have gone to Rob Gronkowski. Now there is talk that troubled future Hall of Fame cornerback Richard Sherman might join the star-studded team. Is this 2021 or 2011?

Matthew Stafford-to-Cooper Kupp is a burgeoning top-tier connection, with two touchdowns – including the go-ahead fourth-quarter strike – in a quality road win against the Colts. Where so many defenses folded in the final minutes of Week 2, Jalen Ramsey had a victory-sealing interception to earn his big bucks.

What makes the 49ers so dangerous? In Week 1, they won a 41-33 shootout against the Lions. In Week 2, they won a 17-11 defensive struggle against the Eagles. The 49ers are loaded on both sides of the ball. About the only thing missing is a healthy running back, because whoever has the job gets injured before holding it for long.

It’s going to be hard to top Baltimore’s win over Kansas City for Game of the Year. It was a reminder that the Chiefs are going to get every opponent’s best punch. They likely would be undefeated if not for Clyde Edwards-Helaire’s fumble on the edge of field-goal territory. Then again, a late break in Week 1 saved the Chiefs from 0-2.

Ho-hum. The Browns rebounded from heartbreak against the Chiefs by disposing of the lowly Texans. The NFL’s best two-headed rushing attack (Kareem Hunt and Nick Chubb) is extra important now that Jarvis Landry (MCL) has joined Odell Beckham (awaiting season debut after a torn ACL) on the sideline.

A popular pick to finish last in the uber-competitive NFC West, the Cardinals needed a fast start to keep alive crazy talk of four playoff teams in one division. They dominated Week 1. It’s more impressive that they beat the Vikings while playing far from their best, even if a missed 37-yard field goal at the buzzer was needed to do so.

The Raiders are not just 2-0. They are 2-0 with wins against two perennial playoff teams, following up an upset of the Ravens by traveling across the country to beat the Steelers on a short week. Derek Carr’s 382-yard passing performance puts him in the early MVP conversation, and the defense finally has a post-Khalil Mack pass rush.

Nothing is more important than a symbiotic coach-quarterback relationship. John Harbaugh asking for Lamar Jackson’s input (and then trusting him with the ball) on the decision to go for a fourth-and-1 to put away the Chiefs spoke volumes about a bright future as Jackson awaits his big contract extension. The defense needs to improve.

The Bills have won eight of the last nine, including six straight, against the Dolphins. A 35-0 win was a feel-good game for the rushing attack (143 yards) and the second straight strong performance by the defense – two weaknesses last season. How good can the Bills be? Josh Allen hasn’t even played well yet.

A win in Seattle any time is noteworthy. A win in Seattle when the NFL’s rowdy “12s” fan base is back in the building for the first time since 2019 is impressive. The new facet of Derrick Henry’s game (six catches) could be what takes Henry (182 yards and three touchdowns on the ground) to the first non-quarterback MVP since 2012.

You can look at the latest loss – 30-29 to Washington on a final-play do-over field goal – one of two ways: The Giants are getting closer to winning, or they are inventing new ways to lose. Either way, the Giants are 18-48 since the start of 2017. The Jets share the same NFL-worst record in that span. The Bengals are the next-most futile (20-46).

Zach Wilson’s four interceptions on his first 10 passes against the Patriots were a horror show. Mark Sanchez and Geno Smith actually bested Bill Belichick as rookies, but both had much better teams around them than Wilson, even after the offseason investments. Boos in Wilson’s first home start show how little patience these fans have left.