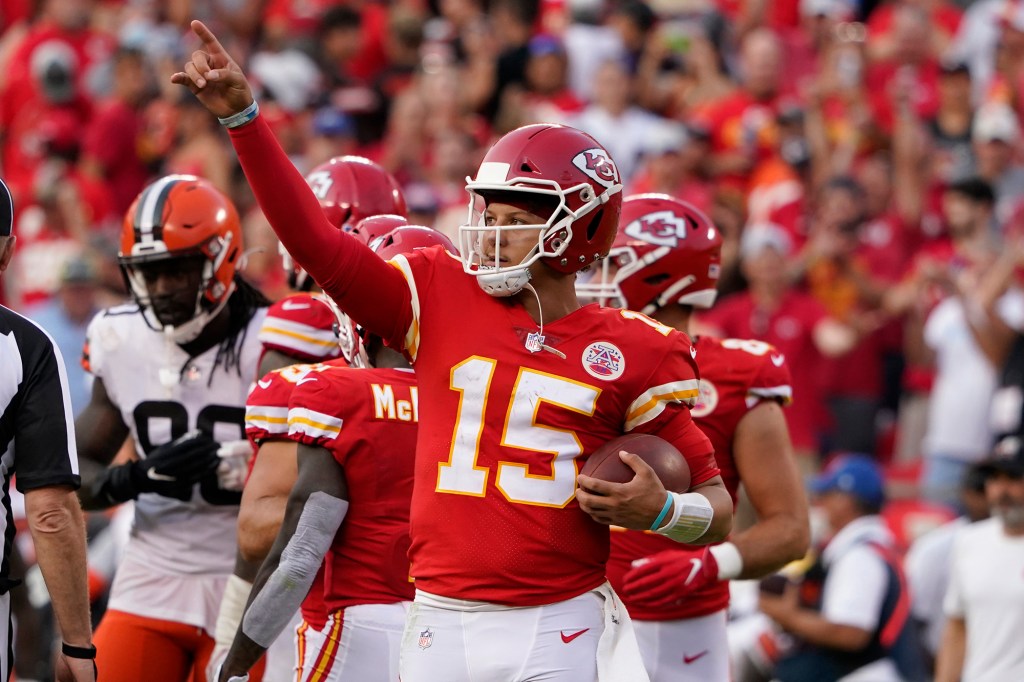 It’s an annual rite of fall to take everything that happened in the NFL during Week 1 and make snap judgements. In this case, the Bills and Packers were wildly overrated during the preseason. The NFC West and AFC West both are sending all four teams to the playoffs. Jaguars coach Urban Meyer isn’t cut out for the pros. And much more.

Some of the observations made off Week 1 games will stick. Some will be laughable as soon as next week.

Trying to maintain a level head, here is The Post’s Power Rankings for Week 2:

That 75-yard touchdown pass from Patrick Mahomes to Tyreek Hill to chip away at a nine-point fourth-quarter deficit was nothing more complicated than two friends improvising on the playground. The remade Chiefs offensive line was better in Week 1 than it was in the Super Bowl LV loss, but it’s still a work in progress.

Raise your hand if you thought Tom Brady might not lead the Buccaneers to the winning score when he got the ball back in the final two minutes against the Cowboys? Anybody? If Rob Gronkowski and Antonio Brown – two afterthoughts in the offense last year – can recapture any of their prime like they did in Week 1, this team will be unstoppable.

Months of talk about Matthew Stafford as an MVP candidate and the Rams as a Super Bowl contender got a little hard to stomach by late August. Then Stafford threw three touchdown passes and had a quarterback rating a few points from perfect to justify all the hype.

It didn’t take very long for the first winless team to appear. But the Browns led the two-time defending AFC champion Chiefs on the road for most of the game. That’s twice in their last two games that they could’ve beaten the Chiefs – only to fail to make one more play. This time, a dropped punt snap doomed a legit Super Bowl contender.

Russell Wilson was the MVP of the first half of last season before everything crumbled for him. Remember the reports he wanted to be traded because the offensive play-calling was too run-heavy? Coach Pete Carroll does, so Wilson threw 23 times (four touchdowns) and the Seahawks ran 50 times to chew up clock on the Colts.

It’s not quite “Who’s Drew Brees?” time, but the first game without their longtime future Hall of Famer couldn’t have gone better. Coach Sean Payton’s reputation as a quarterback whisperer jumped several levels after turnover-prone Jameis Winston threw five touchdowns and zero interceptions in a 38-3 rout of the Super Bowl-trendy Packers.

How quickly everyone forgot that the Steelers started 11-0 last season. Losing five of the last six games, including a historically bad first quarter in a playoff loss to the Browns, will do that. But then the Steelers upset the powerhouse Bills by scoring two touchdowns in a three-minute fourth-quarter span to steal an ugly win. Ugly still counts.

Yes, that’s all four NFC West teams in the top 10. The Cardinals could win a few divisions, but might finish last here. Their 38-13 demolition of the Titans was one of the biggest Week 1 surprises. Kyler Murray’s four touchdowns dazzled, but the defense containing the playmaking trio of Julio Jones, A.J. Brown and Derrick Henry was most impressive.

The Chargers need that “Madden” video game setting: “Turn injuries off.” Just once, going back to the LaDainian Tomlinson days, it would be nice to see this team healthy. Maybe it’s now. Justin Herbert played a smart – not sexy – game and shrugged off the west-to-east travel bug by beating defending NFC East champion Washington.

Cold French fries weren’t the only thing that felt left over from 2020. The offense – with additions of Kenny Golladay, Kadarius Toney, Kyle Rudolph and a healthy Saquon Barkley – picked up where it left off struggling to score points. The bigger surprise and red flag? A vaunted defense was shredded by Broncos quarterback Teddy Bridgewater.

A loss in the standings but a moral victory because quarterback Zach Wilson showed promise — and the rookie’s development is all this season should be judged upon. The Jets have to manage to keep Wilson healthy, however. And the complete lack of a rushing attack and an offensive line surrendering six sacks won’t help the cause.