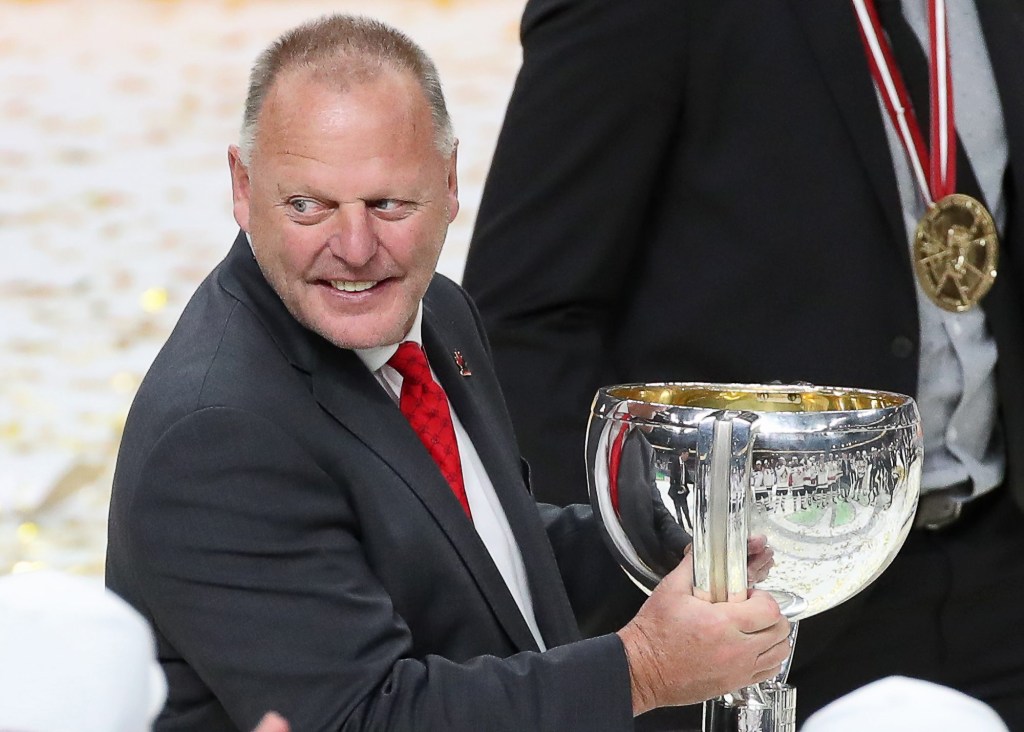 The Rangers sure did sharpen their edges when it comes to the bottom six in importing players such as Ryan Reaves, Barclay Goodrow and Sammy Blais, but the outstanding question is whether these moves can create a team-wide identity that benefits the more skill-oriented athletes who were too easily suppressed last season by more physically inclined opponents?

The answer, provided by none other than Gerard Gallant in a wide-ranging one-on-one telephone conversation with The Post on Friday, is one gleaned from personal experience. And the answer is … well, let’s hear from the incoming 36th head coach in franchise history.

“One hundred percent. There’s no doubt,” said Gallant, who started his NHL career in Detroit in the mid-1980s as a teammate of Bob Probert and Joey Kocur. “It’s not about changing your style of play, it’s about giving a little comfort for those guys.

“There’s no doubt in my mind that Goodrow’s competitive spirit, a Ryan Reaves’ type of player, Jarred Tinordi, that type of player plus the guys who were already here will make this team a lot better.

“Those guys are important players. I love hard-working competitive teams, and with Reaves and whoever else is on your team, we upgraded a part that we thought was a little bit weaker last year,” the coach said. “It was a complete different era, but when I played with Kocur and Probert, I know I felt a lot better playing my game with those guys on my bench.

“That hasn’t changed in the game.”

Reaves, acquired by general manager Chris Drury in exchange for a 2022 third-round draft pick, is a 34-year-old enforcer working in a league where enforcers are becoming extinct, if not obsolete. But Gallant, who coached Reaves for parts of three seasons with the Golden Knights, insists No. 75 has value beyond his pugilistic abilities.

“I know what he did for my team in Vegas for 2 1/2 years,” said Gallant, who said he did not lobby for Drury to trade for Reaves but provided his input when asked for it. “He’s a guy who goes out there and can play the game.

Gallant arrived in New York early last week after spending the summer at his home in Prince Edward Island. Hired in mid-June, the 53-year-old — with an NHL lifetime record of 270-216-55 compiled with Columbus, Florida and Vegas — prepared for his new assignment his own way.

Do you want to know how many players he contacted after taking the job? That would be one — Adam Fox, whom the coach congratulated for winning the Norris Trophy.

“[Reaching out to players] is not what I do. Not at all,” Gallant said. “I just prepare getting my systems tape in place, reaching out to some of the coaches we hired, obviously, and just going over video and stuff like that. I don’t like to reach out to the players by phone, I like to meet them in person. This week has been real good. Players are starting to come in and I’m starting to see some of them. I like that a lot better than bothering those guys in the summertime.

“Once I found out I was going to be the coach of their team I watched some of their games just to see what some players do that is a little different than other players, and what their team system looked like.

“But there’s not going to be a whole lot of big changes that have to be made,” he said. “It’s about execution, playing the right way and work ethic. There’s not a lot that has to be changed.”

But one thing Gallant did, and is doing, is just what every fan and every reporter has been doing almost daily. And that is jotting down potential line combinations for 2021-22.

“I’ve done that since I’ve been hired, putting guys down in different spots,” said Gallant, who will live in Westchester. “Coaches do it all the time, I’m no different, I do it all the time, but to be honest with you, it’s a new slate for everybody. I just want them to come to camp and work hard.

“We know we have some superstars and we’ve got some great grinding players, so we’ve got a little bit of everything, but it’s who fits with who. Do you want to load up your top players, do you want to make more balance in your four lines?

“They’re going to get an opportunity at training camp, they’re going to play some exhibition games, and I’m sure early in the season we’ll be making some line changes,” he said. “It’s whatever the best fit is going to be. It doesn’t have to be the three best players on the same line, it could be a hard-working grinder that makes that line go. We’ll look at different combinations. I’ve got to get to know some of these players a lot better. We’ve got time to do that.”

Gallant will face the same decision confronted a year ago by David Quinn when he was behind the bench. Should the Rangers stack left wings Artemi Panarin, Chris Kreider and Alexis Lafreniere, thus necessarily consigning one to the third line, or should one shift to the right?

“Obviously there’s a lot of talent on that left side. We haven’t made that decision, yet but it wouldn’t shock me if one of those guys moves to the right side,” the coach said. “But right now it’s wide open.

“Like I said, I put lines down every day, what looks good, what looks best but they’ll decide that in the exhibition games. I’ll talk to Dru, Dru knows the players a lot better than I do. So we’ll talk about it, the coaching staff will get together, but there’s no line set now for sure.”

As constructed, if one of the left wings moves to the right, the top six would presumably feature Panarin, Kreider, Lafreniere, Mika Zibanejad, Ryan Strome and Kaapo Kakko. Maybe not, but let’s pencil them in. That leaves the third line wide open in terms of personnel and expected role. Are the Rangers going to have a checking line?

“If you talk to most coaches, you’d like to have your two top lines be offensive lines that can score goals but I’m expecting all our players to play a two-way game. That’s what it’s going to be,” Gallant said. “You can’t win championships and you can’t be a good team if we’re going to say, ‘Well, that’s our checking line, all they can do is check.’

“I need more than that, and I need that from my top lines, too. You need a combination of that from all your players.”

The Blueshirts made a six-year commitment to the tune of just under $3.642 million per to Goodrow, the checking winger who helped the Lightning win consecutive Stanley Cups. It is unclear whether he will line up in the middle or on the wing, but he is expected to have an important role with the team.

“He can play both for me. We’ll surround him with some good people,” Gallant said. “I know he’s a character guy, I’ve heard nothing but good things from former coaches talking about him, so he’ll come in here and play a big role for us and be a big leader for our group.

“I’ve never coached the kid before, but we played against him in San Jose, he was an important player for them, and you see what he’s done in the playoffs the last couple of years for Tampa Bay. We’ll make sure he has a solid role for us. I know he’s really excited to join our group.”

Gallant is the fourth Rangers coach in the past 13 years after Quinn, Alain Vigneault and John Tortorella before him. Each has his own personality, his own approach, his own idea about training camp. This one, by the way, will not include a three-mile run.

“I’m more than fair with our players, I know our players are going to come into training camp in great shape,” Gallant said. “We want to get to our systems as quickly as we can. Like I said, I don’t think it’s a big change, but you’ve got to put it out early and make sure the players understand what we want from them.

“By the last two exhibition games you hope all your players have a pretty good idea about how we want to play. When you don’t have to think about that then you play a lot faster and you play a lot better.

Gallant comes to New York with the reputation as a salt-of-the-earth coach. He does not have a particularly high profile. He is not terribly concerned about his image.

“I don’t think a whole lot about that. That doesn’t bother me,” he said. “I think I’m a fair person, not just as a coach, but overall in my lifestyle I’m a fair person, a very reasonable person. And you know, I get a little hot-headed when things don’t go our way, so I want our players to come and perform every night, be a good team and a respectful team.

“I demand the most out of them and you forgive people, too. I’m an easy-going coach. Work hard, come to the rink and have fun, it’s a tough job, it’s a demanding job but I’d like our people to come here relaxed, no pressure on them, you play your best hockey when there’s no pressure. I’m a guy who gives people second and third chances.

“I think that will help our players.”