Morgan Barron standing out among the other Rangers’ prospects 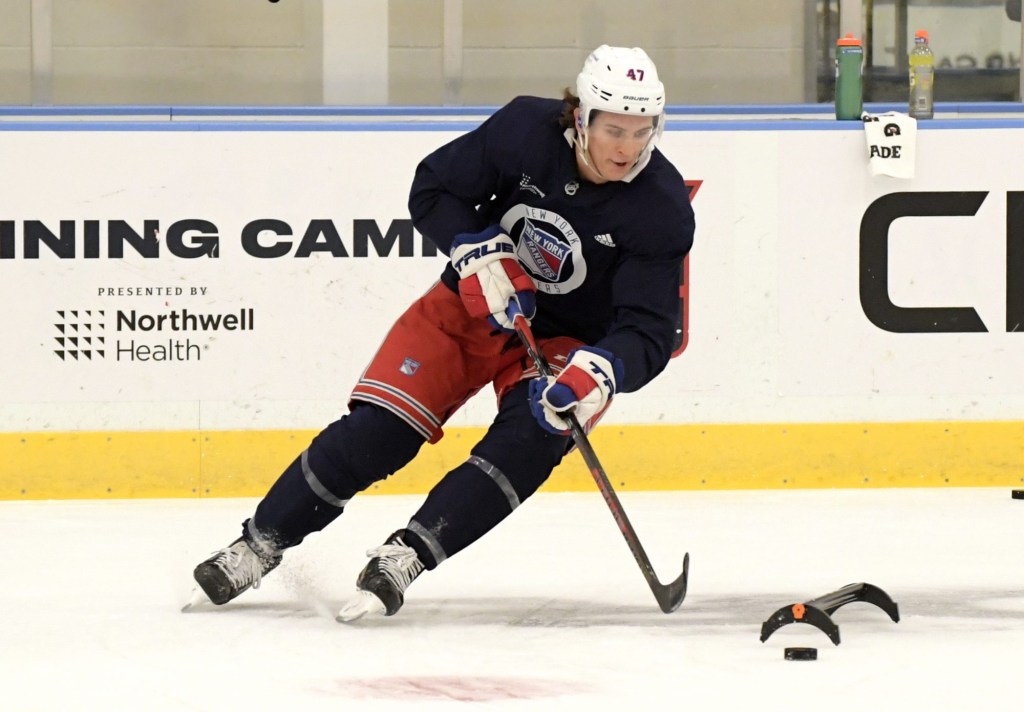 
In a sea of prospects, Morgan Barron is standing out — as could have been expected.

Such has been the case throughout the Rangers’ development camp and in the first of two scrimmages against the Flyers’ prospects, on Saturday at the MSG Training Facility in Tarrytown. At times, Barron has looked to be head and shoulders above his fellow baby Blueshirts, as one of the few with NHL experience should.

“There’s some guys, like me, who have some games under their belt,” Barron said after the scrimmage, in which the 22-year-old scored off a wrist shot from the right circle to spark a rally from a 3-0 first-period deficit before the Rangers ultimately lost, 6-3.

“I definitely tried to play into that [in the scrimmage] and I know I will continue to do that even in main camp and hopefully in some exhibition games and into this season.”

As one of just four players on the Rangers’ 27-man development camp roster who have seen NHL time, Barron has developed some skills that others haven’t — such as an awareness of his positioning and ability to push the pace.

Plus, Barron competes with the ferocity of a player who knows he could earn a spot on the varsity squad.

Barron’s first five games in a Rangers sweater came during the tail end of the 2020-21 season, when the organization was already out of playoff contention. But looking at the teams Barron faced — the Islanders, Capitals and Bruins — it was one heck of an introduction into the NHL.

“Those are three of the best teams in the NHL, in my opinion,” Barron said at the start of development camp. “Nobody is easy to play against in the NHL. I knew that would be a reality [check] coming into it.

“But to really get a taste and to experience that firsthand was good for me. It just goes to show how many good hockey players there are, but at the same time, I felt like I fit in pretty well.”

Barron, who scored one goal in his five-game cameo last season, said he tried to watch film after each of those games the same night before he went to bed. If he couldn’t, he made sure to do so the next day. Over the summer, Barron said he went back through clips again just to further pinpoint things he needs to work on.

After getting sent down to Hartford as part of the final roster cuts last season, Barron was a standout for the Wolf Pack with 10 goals and 11 assists in 21 AHL games. Former Rangers head coach David Quinn memorably said he felt Barron “looked nervous” during training camp, which the Cornell product recently confirmed, admitting he felt hesitant.

But Barron noted how he gained confidence from playing in Hartford for a majority of the 2020-21 season, which allowed him to feel comfortable when he was called up. This season, however, Barron is gunning to make the big club out of training camp and to stick around.

Barron is by far the most NHL-ready forward at development camp. He will certainly be in the thick of roster competition for a third- or fourth-line role, for which he would have to beat out Kevin Rooney or offseason-addition Sammy Blais.

General manager Chris Drury recently revealed he views Barron as a center, despite the 6-foot-4, 220-pounder’s ability to play wing as well. Barron said he is indifferent on where he plays.

“I felt like I put the work in in Hartford and improved myself and earned that opportunity [last season],” Barron said. “It was just nice to get there and realize that I can keep up and be a difference maker at that level. I am excited to get back and ready to have another chance to prove myself.”